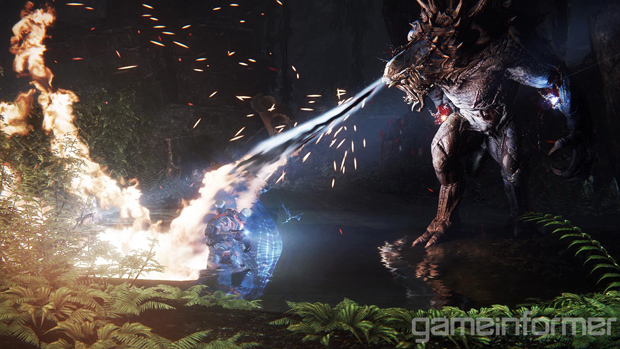 Dibs on the giant fire-breathing monster

Coming from the people who worked on Left 4 Dead, Evolve sounds promising as a multiplayer concept. We’ve heard about the game’s first creature, Goliath (as shown above), who can evolve to grow in size and must take on four hunters, each with their own specialties.

Today, Game Informer posted the first screenshots of the game for non-subscribers and yep, I definitely want to play as the giant alien. It’s difficult to get a true sense of what Evolve actually looks like here, so I’m hopeful Turtle Rock Studios won’t sit on gameplay footage for too long.

As a fan of multiplayer modes in which each player and/or team has distinct abilities and objectives, Evolve is sounding like it could be the next major game on that front. Unless Valve decides to start talking about Left 4 Dead 3 all of a sudden.