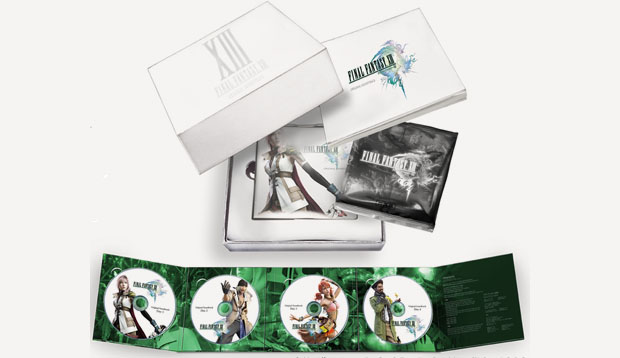 You might have heard about the massive Final Fantasy XIII Original Sound Track packaging, but now we have a better look at it here.

In my near-infinite geekery, I used to have the limited edition soundtracks of every Final Fantasy game available. I had them on a fancy display. One of the most notable was the Final Fantasy VII, which came in a huge box with a metal plate on the front. This new Final Fantasy XIII box isn’t as big, but it seems to share some of the grandness of past boxes.

The limited edition box (5,250 yen) comes in a special box, and inside you’ll find the four music CDs, a drama CD, and a reworking of the Episode Zero Promise – Encounter – story. A standard box comes with just the four music discs for 3,990 yen.

As the fancy new soundtrack webpage tells us, both CDs go on sale on January 27th of next year.