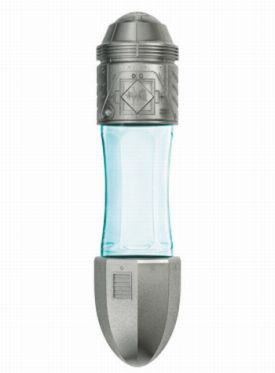 I like game related merchandise. I can’t pretend that I don’t get excited when I see Chocobo seat cushions and other such random wackiness. It’s so kawaii, after all. But sometimes I feel like there is a strong line between merchandise that is awesome and merchandise that is simply whoring out the game series name, and I’m afraid I feel that the above item falls into the latter category. From PSP Hyper:

The FFVII 10th anniversary celebration continues with this Final Fantasy VII 10th Anniversary Potion straight out of Shinra Inc, or rather premium maker Suntory in Japan. Just like the Crisis Core: Final Fantasy VII special PSP bundle, there will only be 77,777 bottles of these and it sets to come out on September 13th, when Crisis Core went on sale. I am not sure what effect the potion, said to contain Vitamin B1 will have on you, but the detail is on the official site if you read Japanese. The price? 3,980 Yen tax inclusive or around US$32.

The potion will be pack in a classy looking white packaging which also include a book called FINAL FANTASY VII 10th ANNIVERSARY ULTIMANIA, covering every title in the Compilation of Final Fantasy VII.

I can dig the book, and the packaging looks great. I guess I just don’t get the potion. There were materia made around the time of Final Fantasy 7 and I didn’t quite get that either. Maybe the reach of my geekdom is shorter than I think. At any rate, hit the comments and explain to me why I don’t think this is cool. *puts on moogle hat and waits*