Soccer is the world’s most popular sport for numerous reasons, but perhaps the most important one is its inherent simplicity: it’s the original “pick-up-and-play” game. You don’t need any expensive equipment or complicated rules — just a round object, and a goal area to put it through with your feet.

For innumerable millions of children around the globe, it’s a sport that starts in the street, where local legends are built upon ankle-breaking flashy moves and shots that bend like Beckham’s. And it can truly be played just about anywhere, from favelas (Rio de Janeiro) to The World’s Most Famous Arena (New York).

That’s the ethos behind EA Sports’ revival of FIFA Street, which was always about arcade soccer, but rarely in the powerup-driven vein of NFL Blitz or NBA Street. This game isn’t unrealistic; it’s a soccer sim, but with a “street” aesthetic. 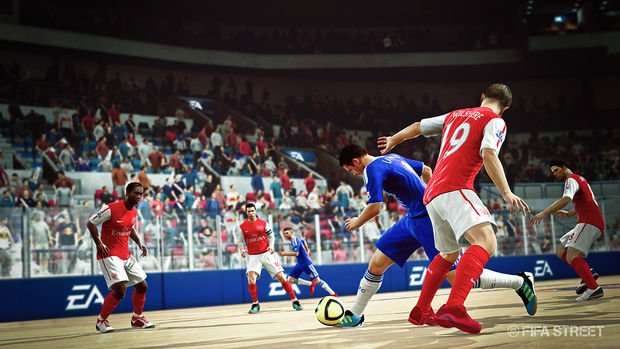 Street soccer, like pickup basketball, is all about making your opponents look silly. Scoring goals is nice and all, but dancing around a defender with the ball in tow will really draw whoops of delight from spectators. FIFA Street aims to exhibit the best of street football, and to do that, EA Canada is utilizing the engine that powers its brilliant FIFA Soccer sim series. Here, it’s used to fluidly string together mind-boggling ball tricks and footwork, all of which has been motion-captured; if you see a how-the-hell-did-he-do-that animation in the videogame, know that a skilled street footballer actually pulled it off in real life.

Being able to play soccer anywhere is an enchanting concept, and FIFA Street represents that with more than 40 different playable environments. Acrophobic gamers might want to stay away from the Shanghai Rooftop pitch; they’ll likely be much more comfortable with their feet on the ground, playing on a bridge over the Griboyedov Canal in St. Petersburg, Russia. Some environments take after real venues, like Madison Sq–I mean, uh, “New York Stadium”; others, such as a repurposed loading bay, highlight the sport’s “play anywhere” philosophy; and there are even a few fanciful ones in there, like a coastal pitch in Rio. 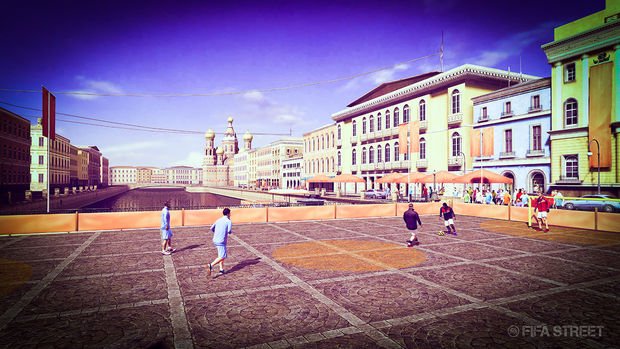 The different environments support fully customizable player counts and rule sets. For example, futsal games — without wall play — are perfectly suited to smaller indoor venues. I tried my hand at 2-on-2 soccer with smaller nets and no goalies in Shanghai; the focus there was on embarrassing opponents with panna/nutmeg moves (getting past a defender by booting the ball between his legs), which were worth two points while goals were worth one.

Motion-captured skills include fancy footwork like pannas and aerial skills like juggling. FIFA Street gives you the tools to show up opponents, and it starts with special one-on-one dribbling abilities. A stationary dribble lets you toy with defenders (which way is he going to go?) before you flip the ball over their heads and blow by them. Those moments — the ones that make you shout “ohhhhhhhhhh” as your dazed buddy lets out a frustrated sigh of disbelief — are the lifeblood of competitive sports games, and FIFA Street looks as if it will deliver them in spades. 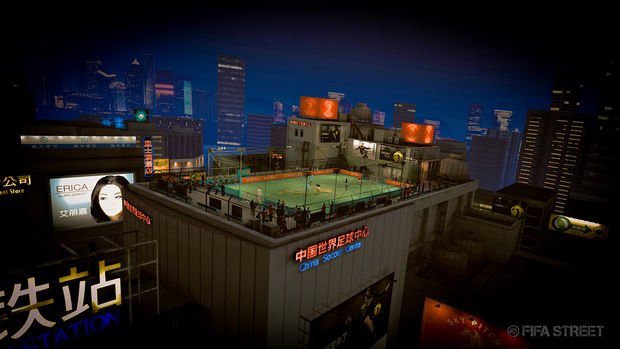 As a street soccer showcase, FIFA Street not only presents the dazzling techniques that street footballers use — it highlights the street community’s stars themselves. You’ll be able to play with and against these athletes, as well as many licensed teams like Man U and Chelsea. Street players are unlocked by completing challenges in the game’s World Tour mode, a setup that charges you with putting together a street team from scratch and making a name for yourself online — locally at first, and then regional, nationwide, and global tournaments. And FIFA 12 owners will be happy to hear that all game progress contributes to their EA Sports Football Club ranking.

EA is attempting to grow the already-massive FIFA Soccer audience with FIFA Street, which is aimed at people who might have heard the critical acclaim for FIFA but feel intimidated by its complexity and scale. I think it’s got a chance to succeed, if only because people love it when videogames make them feel cool by letting them do awesome things. And believe me, there are few things more awesome than transitioning from a juggle straight into a blazing bicycle kick for a goal.