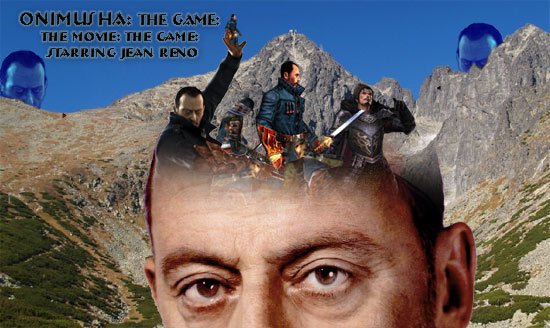 This week’s fake game is one for the record books, and it’s brought to you courtesy of tazarthayoot and, as always, Fronz’s mad Photoshop skills. The game is Onimusha: The Game: The Movie: The Game: Starring Jean Reno, and it’s got more badass French people than you can shake a goddamned stick at. Says tazarth:

Jean Reno plays himself in a past life, where he is also named Jean Reno. He’s a captain underneath the shogunate lead by Lord Nobunaga, who is also played by Jean Reno.

I’ve decided that there should actually be a game for this as well. It will be dubbed Onimusha: The Game: The Movie: The Game: Starring Jean Reno.

Gameplay is a RPG puzzle game.

And really, I just want a photoshop of Jean Reno fighting himself on top of a mountain made up of his own head. Is that so wrong?

No, it isn’t, tazarthayoot. Dreams do come true.