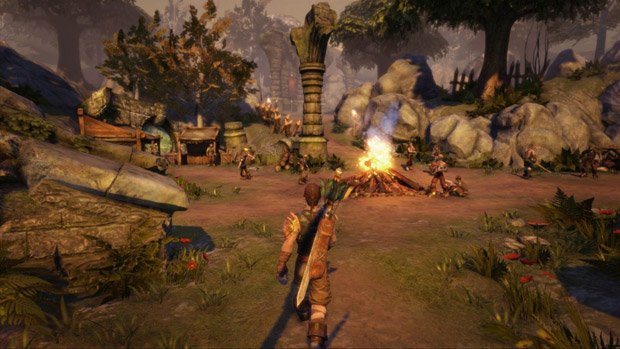 Pretty big news for original Xbox fans has come today. Fable: The Lost Chapters will be getting the HD remake treatment this fall with Fable Anniversary. The original announcement comes by way of Lionhead’s Tim Timmins and the Major Nelson podcast. Like Halo: Combat Evolved Anniversary, Fable Anniversary will be a complete graphical overhaul, while the core game remains exactly the same. Timmins did say the some of the game’s layout and controls will be reworked, in addition to a traditional checkpoint system replacing the hero saves.

Silver Key hero save exploit, RIP. Let us pray too that “reworked controls” doesn’t mean any of that Fable 2 single-button combat nonsense.

The revamped visuals will be powered by Unreal Engine 3 with new animations for characters, new cutscenes, new lighting, and 1080p support. This release will also support Achievements, as well as the 360’s more modern amenities, such as SmartGlass. Though the exact use of SmartGlass was not discussed, the possibility of pub games was brought up as something Lionhead has been experimenting with.

As Pam from Archer would say, holy sh*tsnacks! Straight out of nowhere, this is easily the best news I’ve heard this week. I absolutely love, love, love, love, (are you getting the point yet) love Fable: The Lost Chapters, sinking an ungodly amount of time into the original Xbox version only to have my second playthrough halted by its poor running performance on the 360. And considering how well Halo Anniversary turned out, I positively can not wait to return to Albion.