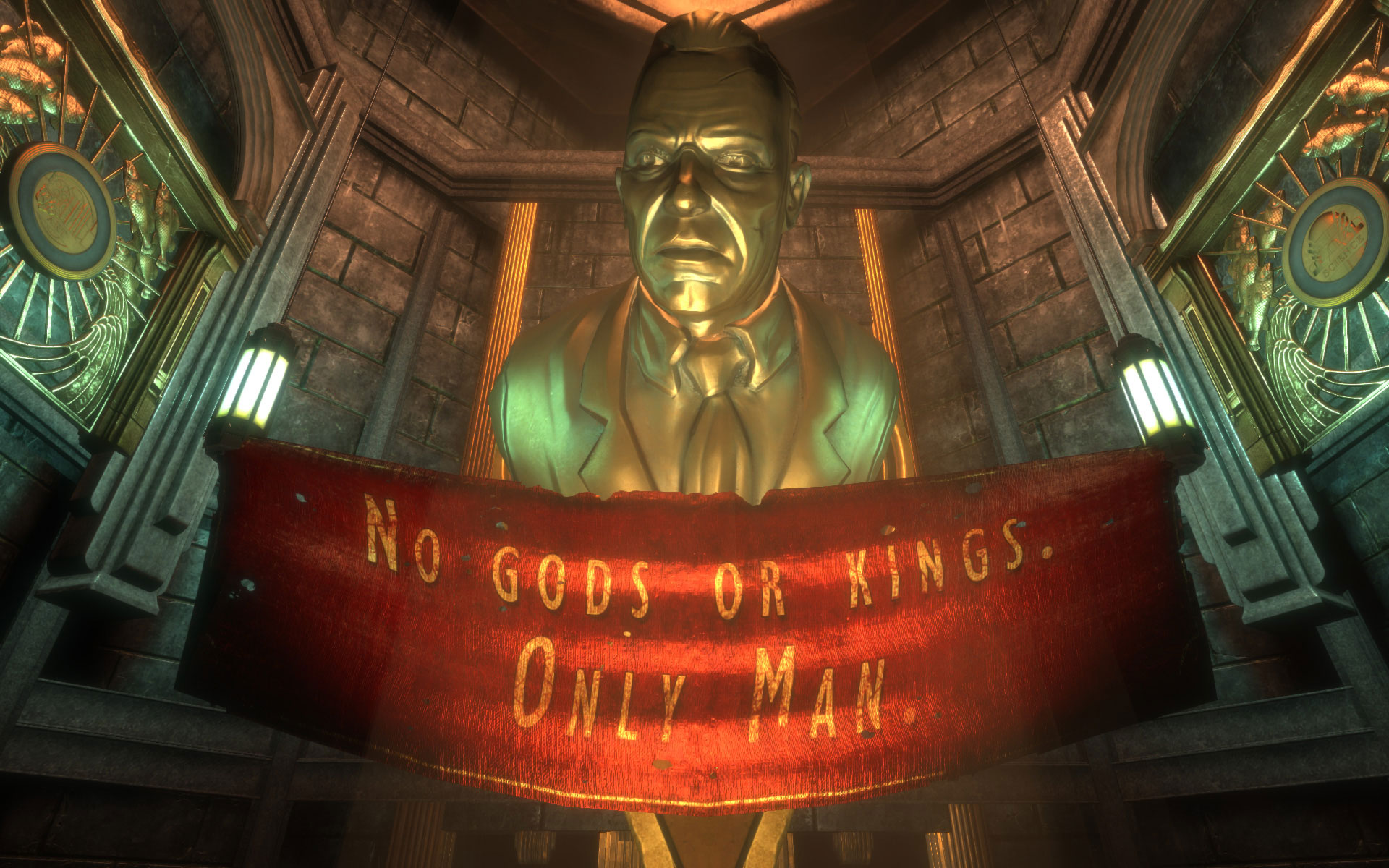 “No Gods or Kings. Only man.” The banner that hung in the atrium of the bathysphere terminus where BioShock‘s protagonist began his adventure was the first thing to grab my attention and pull me into that world. I first played BioShock as a high school freshman back in 2007. For a teenager who thought he was smarter than everyone and had just started reading George Orwell and Ayn Rand, BioShock was the perfect storm of a game for my younger self.

It also served as my introduction to the PC-style shooter. Up until college, the bulk of my gaming was on a console, so games like Deus Ex and System Shock were foreign to me. While BioShock‘s impact on console shooters is undeniable, I couldn’t help but wonder if its themes of exceptionalism and the story of Ryan’s utopia free of government control would resonate with me the same after eleven years. 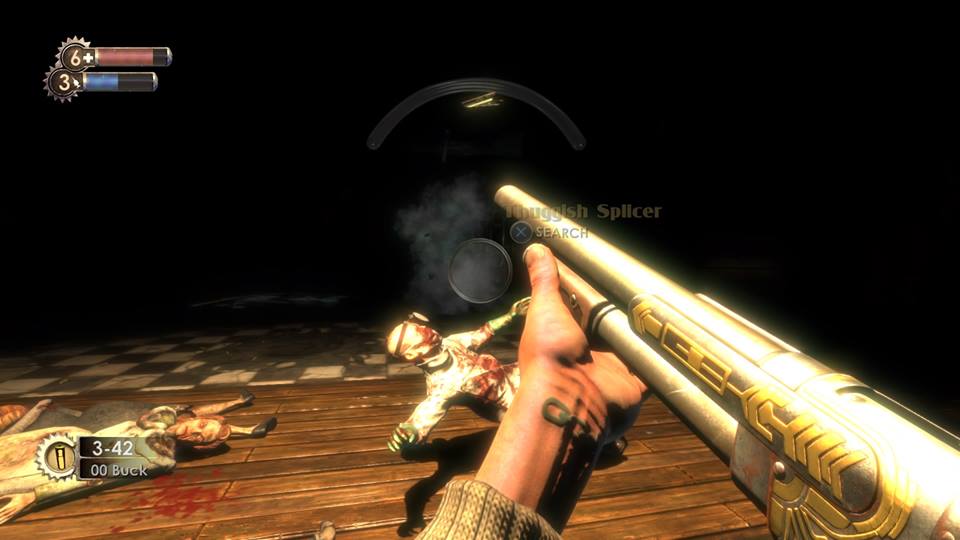 Before we go any further, I should mention that I’ll be freely talking about the major plot points of BioShock in this article. Though I have to imagine that if you clicked on this and you’re still reading, you’ve probably played the decade-old game by now. Just the same, spoilers ahead and all that.

Arguably, BioShock‘s most lasting impact was bringing RPG elements to the console shooter. Up until its release, console shooters used a pretty set formula. They tended to function like the original Call of Duty games: follow a linear path, mowing down enemies along your way, and watch narrative beats play out without any deep sense of customization.

BioShock‘s most exciting feature to me was using the genetic currency Adam to build a character loadout of both passive and active abilities in a first-person shooter. This made it easy to lean into your personal combat style of choice. If you just wanted to focus on bolstering your stealth and wrench-swinging prowess, that was a totally functional strategy. I was always more of a shotgun and telekinesis kind of guy. 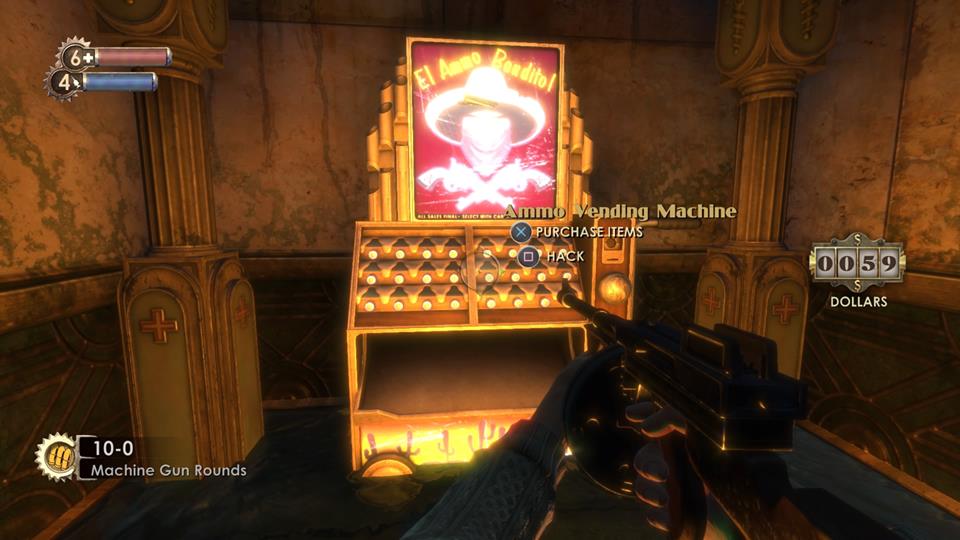 While the base foundation for BioShock‘s gameplay is still great in 2018, its combat in practice feels less impressive than I remember. There’s only a handful of enemies to speak of: multiple Splicers types like the explosive Nitro Splicer or the gun-wielding Leadhead, Big Daddies, and security turrets and bots. Their attack types vary more than enough, but in the late game, all the designers did to increase combat difficulty was bump up enemy health. It’s more annoying than challenging. Even the intimidating Big Daddies become less of a threat once you find the right combination of abilities and weapons to brute force them in a few quick seconds.

Ryan’s extreme capitalist society extends to the gameplay. In a city where you have to pay to use the toilet, it’s no surprise that you can buy your way past most obstacles — including hacking security turrets. Paying to bypass the hacking mini-game may seem like a stupid move at first, but boy does it get old fast. Thank goodness BioShock 2 replaced it with a much faster hacking mechanic.

I was sure BioShock would still feel sound even if a bit dated, but the real reason I decided to replay the classic was to see how its major themes and story beats resonated with me eleven years later. The basic setup sees our silent protagonist crashing at the hidden entrance to Rapture, an underwater city free of government and societal laws. One where scientists would not be constrained by morals, where the actions of business moguls like the city’s founder, Andrew Ryan, wouldn’t be questioned. 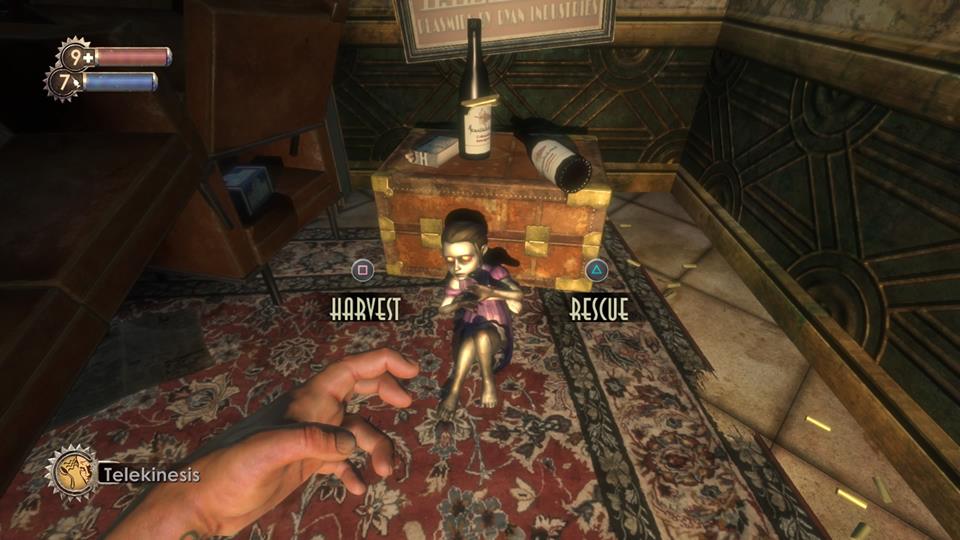 The biggest flaw with the city should be apparent to anyone who’s ever read a science fiction novel about one of these fallen utopias. When you invite only the best and the brightest, you need somebody to do the crap jobs. To quote BioShock villain Frank Fontaine, “Somebody’s gotta scrub the toilets.”

It isn’t long before the city goes to the dogs. It’s the discovery of Adam, the genetic material found in a type of sea slug that can be used to rewrite genetic code. By putting the slugs in small girls called Little Sisters, they turn into living Adam factories. Splicing lets Rapture’s citizens hurl lightning bolts or throw fireballs, but doing it for so long seems to have driven them all insane.

Looking at it now, Adam being found in sea slugs actually seems like the strangest conceit of BioShock. It’s purely weird science that just comes off as strange. Personally, I think simply explaining the discovery of Adam as some non-specific scientific breakthrough might have played better. Plus, I might not have to live with the imagery of ripping a colossal sea slug out of a little girl. 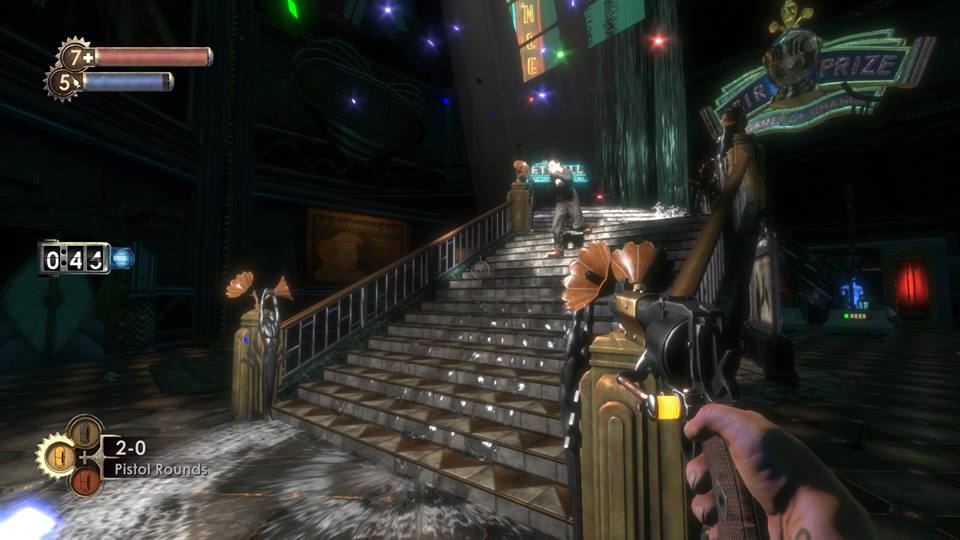 The 1960s setting is filled with that post-war vibe of American Exceptionalism. This look is still being used today, but back in 2007, we had seen a whole lot less of that in games. Fallout wasn’t exactly the triple-A behemoth it has since become, so the idea of an insane person dressed like a 1950s businessman swinging a lead pipe at you seemed a lot more unique.

Rapture is full of stories to tell, the most significant being the struggle between Ryan and Atlas/Fontaine. For most of the game, you’re led to believe the head of Fontaine Futuristics is long dead, that he like many other characters is one you’ll only hear about in audio logs to give you some insight into what Rapture was like before everything went to hell. Then comes that famous twist.

You learn that you haven’t been in control of your actions all along. Atlas, the charming Irishman who has been your only ally in all of this is, in fact, Frank Fontaine. He’s been secretly controlling you from the start using the trigger phrase “Would you Kindly.”

The player character is actually the illegitimate son of Andrew Ryan, sent to the surface by Fontaine and company to serve as a failsafe should they need a trump card against Ryan. This serves as an easier explanation for how you’ve been able to use the bathyspheres to travel around the city as well as revive yourself at Rapture’s vita chambers. Earlier on it’s stated that anyone in Ryan’s “genetic ballpark” would be able to use such devices, but being his flesh and blood makes that a little easier to swallow. 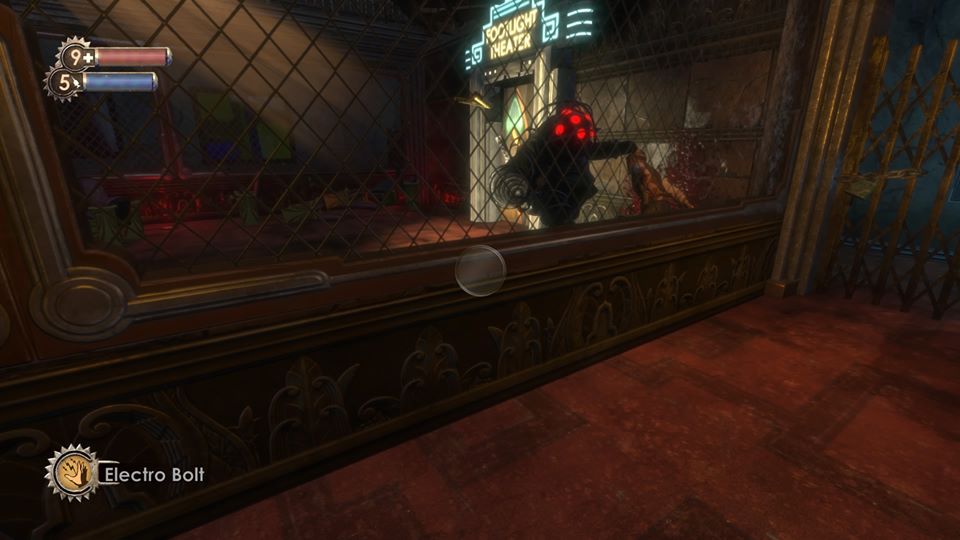 The reveal that you’re not in control of your actions leads to the most impactful scene in your journey. Control is stripped away from the player as Ryan uses your trigger phrase to force you to kill him. More specifically, you violently bludgeon him to death with a golf club. Through all of this, you watch Ryan almost rooting for you to overcome your programming and prove you’re a man and not a slave. Most disappointingly, the remaining few hours of gameplay after Ryan’s death are the least memorable parts of BioShock. With the help of the remorseful Dr. Tenenbaum, one of the scientists behind the creation of Little Sisters, you move to square off against Fontaine. Unfortunately, Fontaine lacks the restraint of Ryan. He comes off more like a “tie them to the railroad tracks” style comic-book villain.

The big twist of BioShock still seems impactful all these years later, but certain in-game decisions feel at odds with the idea of entirely being a slave to Fontaine the whole time. For starters, if the player character has no real choice in his actions, then why are you given the option of harvesting or saving little sisters? It’s only a gripe, but you would think Fontaine would merely have you kill the poor girls to yield the most Adam. It’s a small decision put in your hands, but it gives you the illusion of choice. Harvesting too many of the girls also gets you the “bad” ending — a horribly out-of-place sequence where you return to the surface and take over the world using your newfound powers from splicing.

Though BioShock‘s plot is definitely still entertaining as hell, we only see a power struggle between Rapture’s two biggest power-hungry jerks. I find myself craving a story set before the fall of the city. We get a taste of this in BioShock Infinite’s Burial at Sea DLC, but I wouldn’t expect much more at this point. 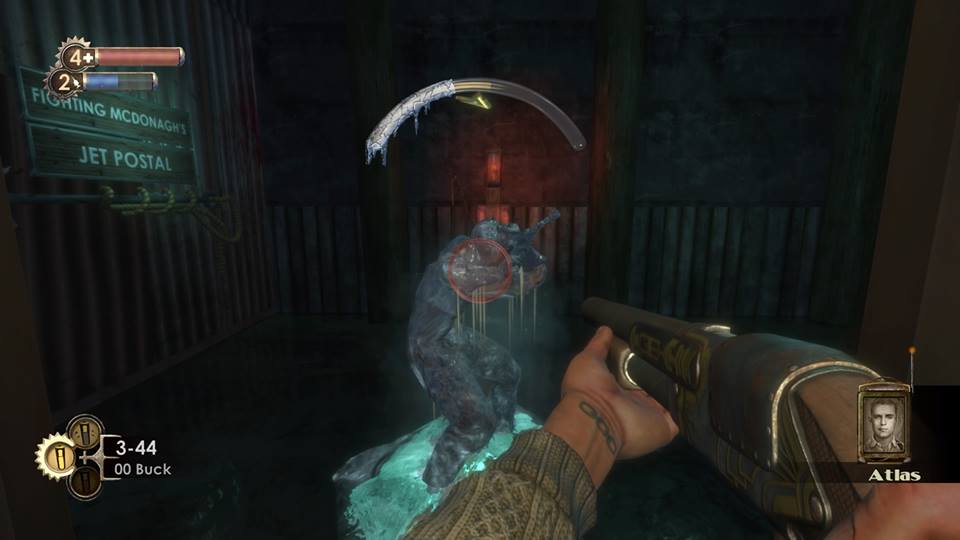 For that reason, I find the smaller tales told through in-game audio diaries to be the more exciting narrative bits in BioShock. Each section of the city you enter focuses on a handful of characters and the horrors they were forced to face in Rapture. A woman who had plastic surgery botched by the insane Dr. Steinman, or a family who lost their daughter only to discover her transformed into a Little Sister. Moments like these stand out.

Fort Frolic, in particular, is my absolute favorite section. The insane artist Sander Cohen traps you in this area of the city, briefly cutting you off from Ryan and Atlas to run a few murderous errands for him. Before you leave, Cohen descends the stairs to greet you, at which point you can choose to gun him down in cold blood or be on your merry way. He’s one of the few named characters who isn’t stuck behind some door or wall preventing you from directly interacting with them. Keeping him alive even gives you the chance to re-encounter him later in the game.

My journey through Ryan’s utopia was an interesting one. BioShock is still one of my favorite games of all time even if age has made it less impressive. Without this first step, it’s hard to imagine we would’ve gotten games like Dishonored that take so clearly from BioShock‘s template. I don’t believe we’ve seen the last of this series even if BioShock Infinite isn’t looked back on quite as fondly as the original. Let’s hope we can get another Rapture story soon, because it certainly feels like we’re overdue one.