Evolve, the asymmetrical four-versus-one multiplayer game from Turtle Rock Studios, is built around the titular premise of growing, becoming stronger, (dare I say it?) evolving. In game, this is called “staging up.” As the monster grows, it becomes more and more of a hulking behemoth potentially capable of complete domination. Every time we get our hands on Evolve, it’s a little clearer that this is an apt metaphor for predicting its chances of success.

If you’re unfamiliar with Evolve, Hamza wrote a preview around the time it was announced that covers the broad concepts of the game. While a multiplayer shooter might sound intuitively broad, it’s the nuances found within that will be what keeps players coming back over and over again. That’s really the developers’ goal — to keep players coming back. They casually mentioned that with Evolve, they’re trying to make a game that’s infinitely replayable.

Lofty as those aspirations may be, it’s not outside the realm of reason. As new maps and variations of each class are revealed, it’s easy to see how switching out just a few moving parts can really alter the dynamic of any given game. Up until now, each build of Evolve that we were shown has been essentially the same thing — forest map, four hunters, one goliath. It’s been interesting just working within the changing constraints of different cooperative partners and everyone’s fresh approach to the game.

With the build that Turtle Rock will be showing off at E3, we have four new hunters (for a total of eight), a map that’s set in a desert ecosystem, while retaining the same goliath monster that’s been shown before (albeit with a bit of refining with regard to his melee attacks and allotted skills). These additions alone are enough to make Evolve feel completely fresh, like a game we’ve played before but like a game that we haven’t really played before.

The new hunters on display each have their own quirks and attributes that make them feel completely unique. Hyde is an assault class that’s outfitted with a flamethrower and a chaingun. His flamethrower deals the highest damage in the game, but it also has the shortest range. Maggie is a trapper, and she has the first pet we’ve seen thus far. Daisy, her companion, acts like a bloodhound and constantly tracks the monster. Daisy also can revive fallen hunters, essentially serving as the fifth member of the team. The third character, Bucket, is a robot that can pull his head off and fly it around the map as a UAV. He also has the ability to deploy sentry guns to support the other hunters.

However, the last hunter, Lazarus, might be the most effective hunter that we were shown. He’s a medic with a cloaking ability and a sniper rifle. His sniper rifle puts targets on the monster that other hunters can shoot to deal extra damage. More importantly, he isn’t a typical medic; Lazarus is terrible at healing in the thick of combat, but he’s excellent at bringing players back from the dead. A running theme through the four rounds that we played was that the monster always wanted to kill Lazarus as quickly as possible, lest he just bring everyone back immediately. 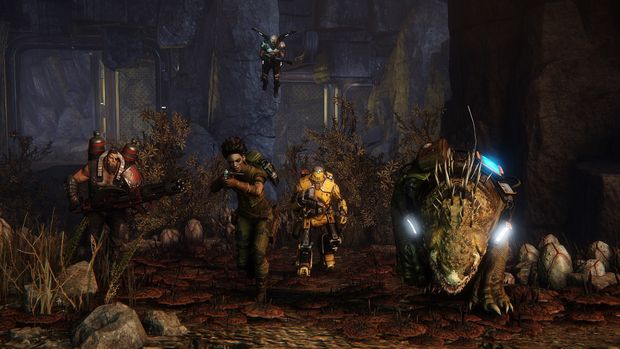 As counter-intuitive as it may sound, the desert map might have done just as much to vary gameplay as the new hunters did. In the forest setting that had been shown before, everything mostly acted as a scale-able backdrop for the action. In the desert ecosystem, everything’s alive, and it all wants to kill you.

This was to the detriment of both the hunters and the monster. Hunters would often be forced to jetpack over these creatures, as there was no real benefit to engaging them. There were also Venus Flytrap-like beings that would ensnare and eat away at the health of any careless hunters, until a comrade could shoot them free.

On the monster’s side of things, each of these creatures can be killed and consumed, putting it ever closer toward staging up. However, many of these wild beasts simply overpowered the monster at a lower-level, meaning that it was more trouble than it was worth to kill them. Unfortunately, some of them are relentless in their pursuit, thrusting the monster in the odd position of being the most fearsome presence on the map but running from everything in sight. 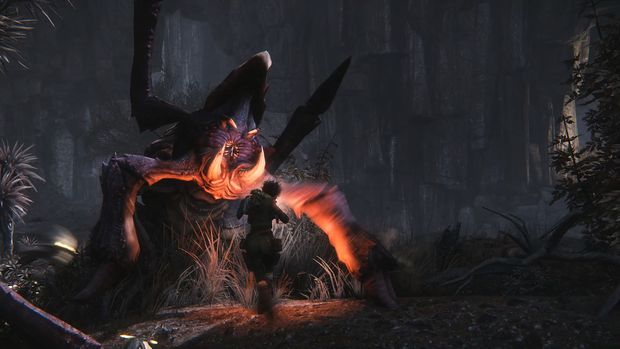 Judging by the handful of demos I’ve seen, Evolve looks as if it’ll walk that line between making the player feel like both the predator and prey at all times, regardless of what role they’re playing. No one’s ever comfortable with their prospects of success, because it seems as if fortunes can turn incredibly quickly.

It’s that uncertainty that will be partially responsible for keeping players coming back. As people mix and match hunters and select from the more than a dozen maps that will be available, it will force everyone to adapt their approach each time. That’s how Turtle Rock intends to make Evolve infinitely replayable. It’s certainly on its way.