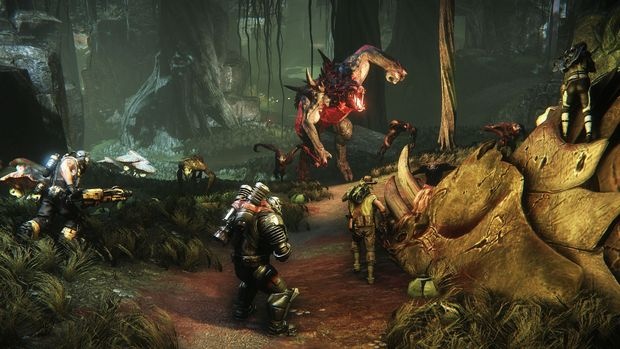 Turtle Rock co-founder Chris Ashton has some long term goals for Evolve, which includes supporting it with DLC “more so than any game ever before,” he told OXM.

“You know, in Left 4 Dead we could make new environments, but we really didn’t have a structure there to make new characters or zombie types, so we were pretty limited on what we could do, DLC-wise. But with Evolve… we made these modular pieces – the way the whole game fits together means we can make new maps, new environment types, new wildlife, new monsters and hunters, and all of that stuff just plugs into the game.”

Of course, people are liable to be nervous about a game built for DLC in the climate of $10 map packs and incomplete feeling products. “We’re definitely looking to see how the community reacts,” Ashton said. “It’s designed to have a long life – hopefully that works and we get to try a bunch of crazy things with the community after release. As long as people are into it and the DLC does reasonably well, then we’d like to keep making more. At the end of the day, it’s a business and it has to make sense, but we believe that we’ve built a game that does support that really well – more so than any game ever before.”

Evolve to support DLC better than “any game ever before” [OXM]