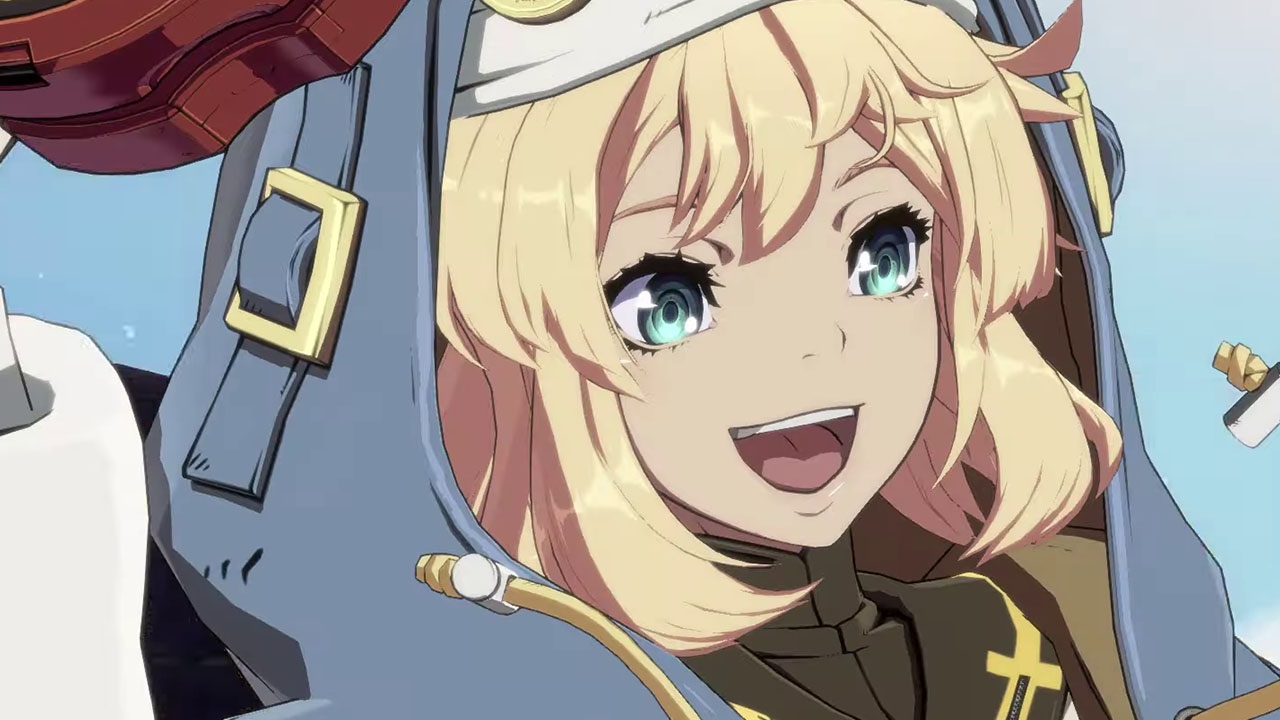 It’s fair to say that the Evolution Championship Series, more commonly known as “Evo,” returned in grand style this weekend. Evo 2022 saw Guilty Gear Strive, Street Fighter V, DNF Duel, Dragon Ball FighterZ, The King of Fighters XV, MultiVersus, and many, many other scrappers take to the stage and stream in global fashion, as players from all over the world gathered at Las Vegas’ Mandalay Bay Resort & Casino in their respective efforts to lay claim to being The Best of The Best.

And, against the backdrop of this utterly electrifying cacophony of violence, the biggest fighting game developers and publishers also took the opportunity to share with their fans exciting news, details, and updates pertaining to their current, upcoming, and (in some cases), former fighting game releases.

And so, for those of you who couldn’t quite handle the red eyes of staying up until the wee hours of the morning, here’s a brief rundown of all of the fighting game news from this year’s tournament, which saw a veritable banquet of character reveals, tech upgrades, new releases, and obscure teasers to keep the fists ‘n’ feet flying well into 2023 and beyond.

Thank you to all of our participants, viewers, and partners who have made Evo's return to in-person competition unforgettable.

Yo-yo master and all-around cutie-pie Bridget will return today, August 8, as the first season 2 DLC character. The crossplay beta is scheduled for September, with a launch tentatively planned for late 2022.

Developer Arc System Works is currently looking into reducing both the lengthy load times and the particularly frustrating server connection times on startup. In addition, GG Strive has surpassed the one million sales mark. You can check out the roadmap for season 2 here.

Capcom dropped an official reveal for veteran troublemaker Juri and newcomer Kimberly, who are both getting into gear for 2023 release Street Fighter 6. Check out their new trailer right here. We will be looking at these characters later today.

The legendary arcade developer perhaps had the biggest and most exciting bevy of updates for its Evo 2022 presentation. Regarding The King of Fighters XV, SNK confirmed a second season of DLC for 2023, revealing a new team of characters from Samurai Shodown. Speaking of which, it was also revealed that SamSho itself will be receiving a rollback netcode update in spring 2023, which will hopefully breathe new life into a great, undersung fighter.

SNK announced that is working on a brand new Fatal Dury/Garou title, but no other info was revealed.

In a somewhat confusingly presented reveal at the end of the Evo 2022 Tekken 7 finals, Bandai Namco announced that the 3D fighter would be receiving a new tournament season in 2023, with a brand new balance update planned for August 17. A teaser, spotlighting a gorgeous new Kazuya Mishima model, seemed to be announcing… something. A lack of concrete confirmation, complete with a very confusing commentator response, has led to muddled community musings on whether this was Tekken 8, a Tekken 1 remaster, or something else entirely.

Not a whole lot to report for Arc System Works’ brilliant, long-life tag fighter. Fans did not go away empty-handed, however, as it was announced that rollback netcode would be heading to the anime fighter in the near future. The update will launch on PC, alongside all-new PS5 and Xbox Series X ports of the game, while PS4 and Xbox One fans should stay tuned for further announcements.

It was also announced that Lab Coat 21 is definitely the final DBFZ character. In addition, there will be no more balance updates going forward. DBFZ is, in essence, “complete”. 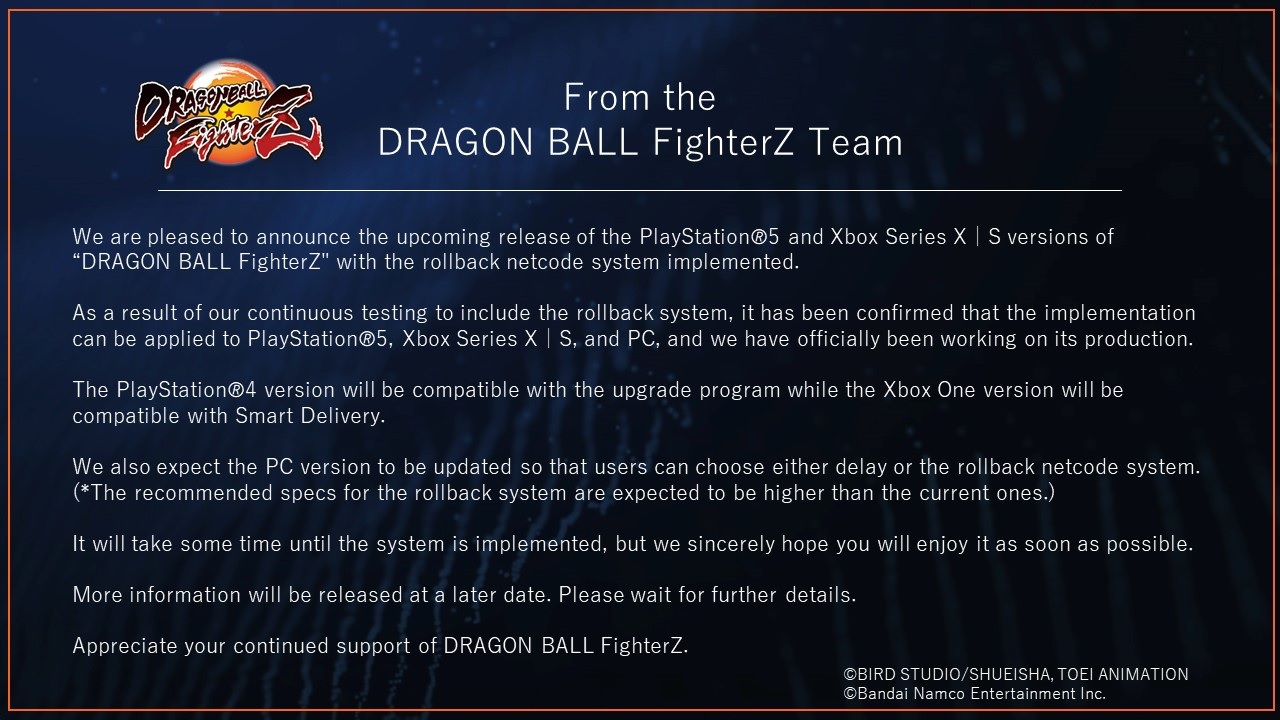 Speaking on long-life fighters, Autumn Games’ Skullgirls: 2nd Encore had a marvelous weekend, with lots of eyes on the stylish, enduring 2D fighter. Alongside new footage of the incoming Blach Dahlia, it was revealed that Skullgirls‘ all-powerful boss character, Marie, will finally be making her grand debut as a playable character on PC, console, and mobile platforms in 2023.

Following the recent tease of new DLC characters Mash Kyrielight and Neco-Arc, Melty Blood director Kamone Serizawa released a six-minute video offering up further detail and explanation in regards to the Tsukihime fighter’s upcoming mechanic changes, balance tweaks, and gameplay overhauls. These include a reworking of the Shield system, as well as changes to Dashes, Moon Drive, and combo mechanics. In addition, the dev team is looking into netcode improvements and an updated Replay function. You can check out the full video below.

At Evo 2022, Player First Games revealed a couple of neat tidbits for the upcoming platform fighter, announcing that Ranked Mode will officially launch in the delayed Season One update. In addition, two new DLC costumes were revealed, restyling LeBron and DC Comics hero Robin, and Bugs Bunny in his legendary Valkyrie costume from the award-winning short, What’s Opera, Doc?

A rescheduled date for season one remains unannounced.

The re-release of Atlus’ very flashy anime fighter has received a rollback netcode update. It is available to download right now on PS4 and PC. This will come as a huge relief to P4A fans, as Atlus had previously seemed a little disinterested in the idea of implementing the much-vaunted online technology.

It's gut-wrenching to admit but #BlazingStrike's release date has been moved back to Spring 2023. However this delay will help polish the game to ensure the best game experience possible (maybe with crossplay), so I really hope you guys stick around a little longer. ????❤️????❤️ https://t.co/DBRTJWOg2D

AkSys Games’ retro-infused 2D fighter Blazing Strike has been hit with an unfortunate delay and will no longer meet its previously announced 2022 street date.

“It’s gut-wrenching to admit but Blazing Strike‘s release date has been moved back to spring 2023,” tweeted developer RareBreed Makes Games. “However this delay will help polish the game to ensure the best game experience possible (maybe with cross-play), so I really hope you guys stick around a little longer.”

Blazing Strike will now launch in spring 2023 on PlayStation, PC, and Nintendo Switch.

The retro arcade cab developer announced its newest incoming cabinet, which celebrates Capcom’s legendary 2000 release Marvel vs. Capcom 2: New Age of Heroes. The new cab, which will be able to pre-order from Arcade 1Up from September 8, will feature a grand total of eight Marvel/Capcom fighters from the ’90s and ’00s.