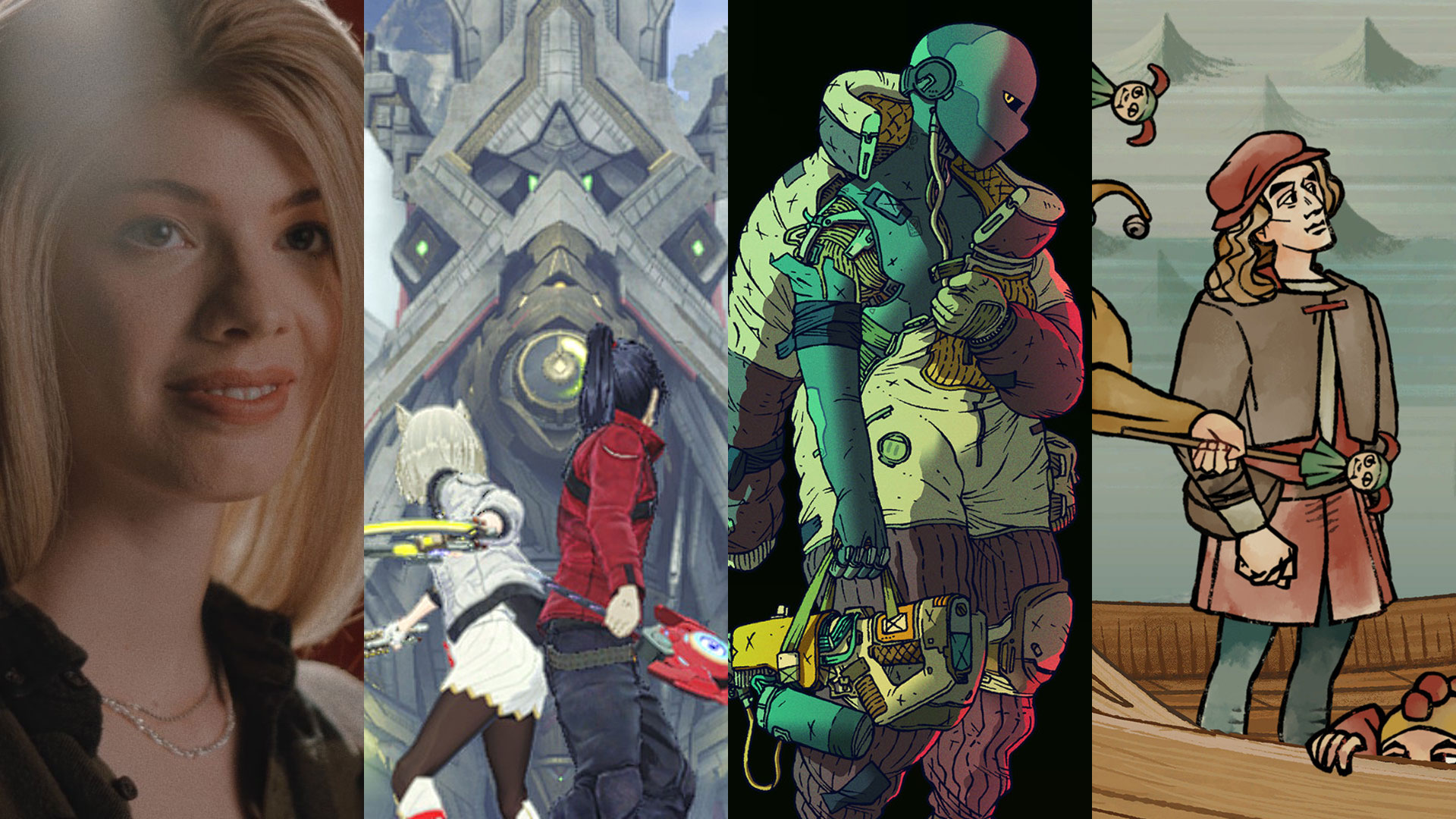 Slowly rolling backwards on the year

Another year has come to a close, and so we’re looking back at the breadth of games we saw throughout these last 12 months. Many came and went, and gradually, I’ve managed to whittle the crowd down to something resembling my ten favorite games of 2022.

It wasn’t an easy task, to be honest. Sure, this year saw the delay of multiple big-name projects into 2023. I’m a bit grateful for that though, as it at least gave me time to spend on some smaller indie releases. And wow, did they come out swinging.

This year was the year of small games, tactics games, story-driven and narrative titles, and more. I played a lot of games this year that felt like they were pushing forward, whether through new mechanics and ideas or just pushing hardware to its limits. Sitting down to whittle down my list, I was cutting games that I genuinely enjoyed and could have easily made my list last year. Plus, I got way into Final Fantasy XIV.

This was also the year of Chainsaw Man, and I’m not -not- mentioning that.

2022 had some stiff competition. My honorable mentions list could stretch on for ages. And my top 5 or so have all swapped around constantly as I’ve thought this over and over. Heck, I had to cut off Midnight Suns and Chained Echoes from consideration, as I just didn’t have the time to properly dive through them before I finalized my list.

Well, let’s get to the heart of the matter. Here are ten of my favorite games from this year, in no particular order except the last one. Part-speedrun tutorial, part-Toonami special, but 100% dripping in style and incredible design choices, Neon White is a breath of fresh air for folks who still boot up Titanfall 2 just to run the Pilot’s Gauntlet. Everything, from its incredible vision of heaven and unabashed commitment to the bit down to the actual movement and gunplay, felt rock solid. The story still didn’t move me quite as much as it did for others, but the action and killer soundtrack of Neon White have been stuck in my mind all year. Seriously, even against a line-up of heavy hitters, Neon White is one of the best OSTs all year. I was down-and-out on Pokemon for a long time headed into 2022. I’ve got friends and family who adore the series, but the mainline series hadn’t hooked me in since the Game Boy Color. Pokemon Legends Arceus is the entry that didn’t just re-imagine Pokemon; it re-ignited my spark for this series.

The catching mechanics of Arceus turn the semi-open, Monster Hunter-like environments into careful cat-and-mouse games, heightened by the presence of terrifying Alpha Pokemon. I loved the danger and the thrill. I loved how this journey wasn’t taken over well-trodden roads, and the world felt like it was still wild and new, despite being a region long-time Trainers know well. It was easily the better of the two Pokemon entries I played this year, and hopefully the Legends line is something The Pokemon Company returns to in the future. Mystery, laughs, twists, and great puzzles. The nirvanA Initiative is what I’ve wanted to see from Uchikoshi and company since the Nonary Games concluded, and what I’d hoped the first AI: The Somnium Files would be.

There’s a lot to be said for a shift in leading characters; Ryuji was fine, but Mizuki easily steals the show. Still, what endeared the nirvanA Initiative to me was seeing this series embrace real puzzles and escape room-style scenarios for its dream-diving sections. It was more enjoyable to puzzle these out than any of the more esoteric, dream-logic problems were. And the overall story structure ends up twisting and winding in a more interesting manner, too. This felt like the team finding their footing in the Somnium universe, and making it stand tall in the pantheon of murder-mystery adventures. Honestly, who didn’t fall down a Vampire Survivors hole this year? While there’s been an influx of players recently thanks to its DLC and Game Pass debut, I’ve been on the Vampire Survivors beat since this time last year. And yet it’s never really gotten old or dull in that time.

Sure, there have been times I’ve taken breaks or even uninstalled it from my computer for a couple weeks. But poncle’s effective blend of active inaction, avoiding enemies while hoping you’ve made the right upgrade decisions and maneuvers to stay afloat, mixes tower defense and roguelite into a beautiful blend. It’s one of many indie success stories this year, but poncle and the Vampire Survivors crew have really put in the work, all the while offering an incredibly fun game at a mind-bendingly low price. Two moments stick out to me, that ensured Elden Ring would be on my end-of-year list. The first: opening a treasure chest and waking up in Caelid. Walking out into that blasted land, with the scarlet canopy weaving around its shores and cliffs, I knew I dug this game.

The second was another teleportation, this time to the Haligtree. Here, I needed a moment to just take in the scope and wonder of this massive area, completely separate from the critical path. I beat every boss, conquered all foes, built the perfect Tarnished and in the end, ushered in an era of stars with the witch Ranni. Elden Ring is a big, gorgeous culmination of years of Souls development, and it really manages to achieve all it set out to do. With Microsoft building up a wealth of studios and building out Game Pass, Pentiment is the sort of end result I was hoping for in all of it. This passion project from a team over at Obsidian is not the sort of blockbuster, big-budget, all-out affair you’d expect.

Instead, Pentiment is rich, beautiful, and wonderfully focused on its historical narrative adventure. Following Andreas Maler through the ages as the world evolves around him, dealing with the times while also investigating a murder, was something a bit different. And it clicked incredibly well because of it. Pentiment is sharp in its writing, art style, presentation, and more, and well-worth checking out. It’s an exciting sign of the possibilities for smaller projects from the big studios under the Xbox banner. I had been struck by Signalis‘ style since an early demo I checked out. Pixel art, anime style, and low-poly environments made for a mix of styles that felt bound together just right. It was exciting to see that rose-engine’s survival horror game managed to stick the landing, too.

Signalis feels like a love letter to classic survival horror. Dark hallways and corners loom large. Ominous, vacuous silence makes every step feel louder than it should, as you carefully navigate through dangerous, monster-filled corridors. The limited inventory and elaborate puzzles meant I was constantly making choices, juggling what I could hold and what I was willing to risk every outing. Signalis is such a tightly packed, perfectly paced bite of survival horror that I can easily see myself booting up again several times over. This is my crow-eating moment: I did not think Xenoblade was for me. Despite loving the Xenosaga series, Chronicles never managed to draw me in. But the war story focus of Xenoblade Chronicles 3 caught my eye, and boy, am I glad I gave it a chance.

There hasn’t been a party that I’ve dug as much as Xenoblade Chronicles 3‘s group of rag-tag adventurers in some time. Brought together by fate and driven to discover just why they are born to die in never-ending war, it doesn’t take long for them to start fusing into robots and fighting gods. But it’s the little moments that kept me locked in; campfire hang-outs, character-focused quests, and tons of time spent on developing this crew and their growing group of cohorts made the big moments hit. I’ve been, diving into side quests and extra content, holding off on rolling credits because I don’t want to be finished with this world. Xenoblade Chronicles 3 is easily one of my favorite RPGs I’ve played in a while. As a fan of both FMV and Barlow’s previous work, I was eager to see what the team at Half Mermaid would do with Immortality. The match-cut system is interesting enough, but as it turns out, Immortality is much, much more than just a novel navigation tool.

This mystery, that ambiguously sends you searching through the lost film history of a missing star, smartly breaks down the barrier between film and subject. It draws you in, not just with the match-cut that asks for careful observation of scenes, but in its framing too. You can go for a long time without using an interface, and all the while be absorbed in the story, connecting dots and matching names to faces. It drew me in, and didn’t let me go, ultimately revealing a dialogue about creation and creativity that’s been stuck in my head for months. In a year full of fascinating narrative design, this was a highlight. Given how early it arrived in the year compared to some other games on this list, I wasn’t sure where Citizen Sleeper would fall on my list as more and more games arrived. It might be the greatest testament to Jump Over the Age’s sci-fi, narrative-driven RPG that it’s still held up through it all.

In Citizen Sleeper, you play a Sleeper, a runaway worker formed from an artificial consciousness in a failing body. Camped out on Erlin’s Eye, every day is about staving off hunger and damage, alongside the looming threat of planned obsolescence without the corpo-mandated medicine. But then something clicks. Amid all the daily dice rolls, hoping for high rolls and trying to keep ahead, you start to form a community.

Others trying to get through life, drifting through the Eye, start to drift into your orbit. Soon, you’re not just trying to survive. You’re forming a co-op and commune., or hacking the station for ancient secrets. You’re building a still to try and keep an old haunt afloat.

All the while, Citizen Sleeper asks the player to juggle clocks, ticking up towards success and down towards failures. This experience made me think about how role-playing games operate, and what emotional stories can be formed from the looming stresses and dangers of life on the outskirts of the universe. By the time I left the Eye, I felt at peace with my journey there, and what might be next for my Sleeper. That journey was easily a highlight of 2022, and my favorite game of the year too.