Even with long queues and miles of content ahead, it’s already been quite a journey

Every day over the holidays, I woke up early to log onto a game. My avatar would idle around as I worked, and in the spaces I could find, I’d sneak a few quests or just listen to the music, taking in the sights and sounds. It finally happened. Final Fantasy XIV hooked me in.

For longer than I’ve even been professionally part of this industry, I’ve heard people talk about Final Fantasy XIV. Yes, I’ve seen the memes about its free trial and critically acclaimed expansion. I’ve heard friends gush about it. I’ve even had to write news stories about it, all the while osmosing what I could and learning more and more about this incredible redemption arc, from initial launch to A Realm Reborn and beyond.

Earlier in 2021, knowing that the Endwalker expansion was on the way, I thought it might be time to finally dip into Final Fantasy XIV. I’m not really an MMORPG kind of guy; I’d seen friends play World of Warcraft and Final Fantasy XI, and I even tried my hand at a few like Guild Wars 2, but none of them stuck.

Yet with every year and every new expansion, it was becoming clear that Final Fantasy XIV wasn’t just a good MMO, but something that would leave a lasting impression on games to come. That, I thought, was worth at least trying. And so I determined that this holiday season, I would finally give Final Fantasy XIV a fair shot.

And oh boy, what a choice that’s turned out to be.

I had known going in that playing while a new expansion has just launched would be an undertaking, and Final Fantasy XIV is immensely popular. It was contending with server congestion even before Endwalker was in sight. I just don’t think I had a proper appreciation for what that meant.

Because I had created a free trial account a few months ago, I was able to sneak in under the wire with regards to Square Enix’s (as of this writing) block on new account creation. I still can’t seem to upgrade my trial to a full account, but I can at least login and play A Realm Reborn and on through Heavensward, the first expansion for Final Fantasy XIV.

Being a free trial player has meant queues, though. Well, queues if I’m lucky. Most of the time, in order to alleviate server congestion and ensure those who own Endwalker and are paying subscribers can get in to play the new content, free trial players can’t log in if the queue is large enough. Once in a while, I’ll see a 40 to 50 person queue and get the green light. But if it’s just after work, primetime hours and I try logging in, well, I’m just looking at a launcher.

It’s a system I honestly really respect. Interest in Final Fantasy XIV hasn’t stopped surging for a while—me and my efforts to play it are proof of that. Gating off new access and limiting trial log-ins so people who have bought and paid for the expansion can get in to play is a solid move.

That does mean most of my playtime has happened in “off-hours,” either the early morning or late at night. Sometimes I can ensure a spot in the evening by logging in early, plopping myself somewhere, and shaking the mouse often enough to not get logged out for being Away From Keyboard. But outside of the one or two times I’ve done that, playing has usually had to happen at dawn or dusk. The experience of actually getting in to play Final Fantasy XIV has been that: either learning to love it when it’s available, or having enough patience and persistence to hold a spot in line, like I’m queuing up for new sneakers or a graphics card. But that’s the outside, client-side of Final Fantasy XIV. That’s me getting out the door and putting the keys in the ignition. So what’s it like once I’m in? It is, to put it simply, exactly what people have been saying about it for years.

To reiterate, I’m not an MMORPG guy. For a long time, I thought this was due to a myriad of reasons. Cluttered interfaces tend to bother me, the mass of text and avatars all populating at once just seemed like chaos, and not the kind I usually enjoy. But the world also just felt distant to me. Not quite lifeless, but never very lived in. And the stories felt distant too; always about other characters.

Final Fantasy XIV does take a little while to get going, though not nearly as long as I think some make it out to be. And so much of it, for me and for others, is the world and its characters. It’s vibrant, but not aggressively colorful. Huge and vast, but with plenty of corners where people can just sit, vibe, and live.

It’s easy to get lost in the politics of Final Fantasy XIV. The story takes place in a literal realm reborn, as communities are picking up the pieces from a past calamity. A terror that actually took place in the old, launch Final Fantasy XIV, and is now spoken of as history—a neat touch that just builds up this world’s ingrained legacy.

And so as you rebuild, you get to explore too. You see how these different places have dealt with the chaos. I made a rule early on to only fast travel if my objective was further than one map’s distance away. If I had to go from the pirate town of Limsa Lominsa to the Waking Sands, I’d use the handy-dandy teleportation options. But otherwise, if I’m only going from the Central Shroud to an adjacent area, I’d go on foot. This world is amazing to just explore and see up close. Though it’s easy to mark A Realm Reborn‘s slow pace and sometimes lengthy quest lines as a low point, even compared to the post-launch patches I’m currently playing, they’re so important to the experience. The world of Final Fantasy XIV is vast and filled with a lot of names and places, events etched in history, that you’ll need to hold in your head. The nice part about these quests is they give you time to get there. Over time, I became incredibly familiar with the layout of La Noscea, the various areas within the Shroud, and even the market layout in Ul’Dah.

Familiarity is then rewarded with story developments that, to put it bluntly, hit closer to home. The political intrigue and strife between a city-state’s government and its wealthiest merchants, for example, hits a lot harder when you know these places and people as more than just letters on a page. Over time, I’ve learned that Final Fantasy XIV is very, very good at building upwards with its narrative. Somehow, throughout the many quests, trials, and dungeons I’ve completed, it all feels interwoven and important for me, helping me contextualize the drama when it hits the fan.

At the center of all it is your character, usually referred to as the Warrior of Light. Even though you’re free to have your own name and origin, your avatar still feels centered in the world’s events. It feels personal in a way that creates some genuine, surprising connections between your “WoL” and the various NPCs you meet along your travels. Even when you’re just running across a continent delivering wine and cheese, it’s because a lot is at stake and characters you’re growing to care about need your help. It makes the surprises and developments that start to emerge hit a little harder, and the victorious celebrations a little more joyous, when you have a crew like the Scions around to join in the cheer. 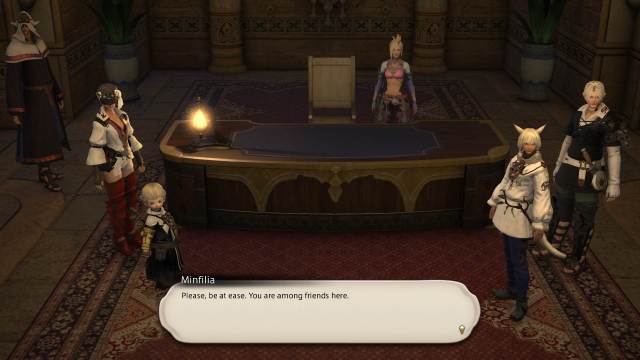 Despite long queue times and heavily populated servers, players have also been extremely kind to “sprouts,” or newcomers, like me. One party was extremely patient with me as I tried to figure out the Return command for a certain dungeon. And others have given nice tips in party activities, commended my efforts, or just shared a dance or a wave at folks going by. From the sample size I’ve seen, it’s a generally nice community.

Yet I’m only inches into what feels like a lake, possibly even an ocean. I’ve just been sprinting through the main story quests of A Realm Reborn and its patch content, but there are still many expansions ahead of me before I get anywhere near where current players are. There are new Jobs to undertake, crafting and cultivating to get lost in, reputation to earn through world activities, and more. I’ve heard whispers of a Triple Triad side venture that will apparently swallow my time whole. I can’t wait to stumble onto it.

All of it combines for an MMORPG that feels inviting and welcoming. I rarely feel completely lost, and there’s a constant reminder of how I can keep moving forward readily available at all times. And the story it tells, while it may be somewhat slow to start, works so well because it hones in on the interpersonal scale between my character and others. Sure, I’ve killed a “god” or two. But I’ve also met some cool characters, and lost myself in fun side stories. The Job-related ventures have some interesting, enjoyable arcs to follow as you grind up through the ranks. So is right now a good time to start playing Final Fantasy XIV? Well, that’s a complicated question. If you haven’t made an account whatsoever, you can’t right now, so the idea’s moot. And if you already have an account, you’re probably one of the many people sitting in queue in the evening.

What I can say is that, even though the log-in situation isn’t ideal, I’m kicking myself for not having started Final Fantasy XIV sooner. It’s weird to, after all this time, come to the realization that yes, the memes were real. But hey, they are: Final Fantasy XIV is a good time, with a free trial that’s so generous in sheer amount of content to play that it feels like thieving. I’m glad I finally started.

Please don’t spoil me on anything that happens, though. Endwalker is still a long way away.