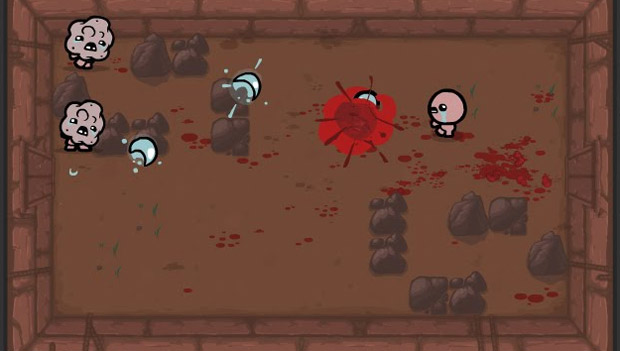 The Binding of Isaac is a roguelike shooter that’s headed for Steam next month. It’s being developed in part by Edmund McMillen of Team Meat; if you’re familiar with his past work, you can certainly see stylistic and thematic similarities.

Speaking with Destructoid via email, McMillen says that this project “originally started as a ‘game in a week’ but ballooned into this little monster.” Even though it’s not a Team Meat production, Isaac is “also a way for me to prototype some design ideas for the next Team Meat game as well.”

“We went with Steam because the game’s a PC game and my past experiences with Steam have been amazing,” he says, although “It would be cool to put it on 3DS. Not because of the 3D, but just because I want something to play on my 3DS.”

“I like [the 3DS e-Shop] so far and wouldn’t be against making something for it if I knew how games were selling on it. Tommy and I are devs for the system and plan on buying a kit this year but don’t have any games in mind specifically for the system yet.”

“Honestly, we never really talk about ‘Wouldn’t it be cool if we made a game using this system?’ It’s always ‘Wouldn’t it be cool to make this game, and then we can see what platforms it works on?’ I’m not a fan of deving specifically for a new system, peripheral, or tech/mechanic. I think I’ll always dev games on PC first, then take them to console if they fit.”

Expect to hear more about The Binding of Isaac later this week from Jonathan.