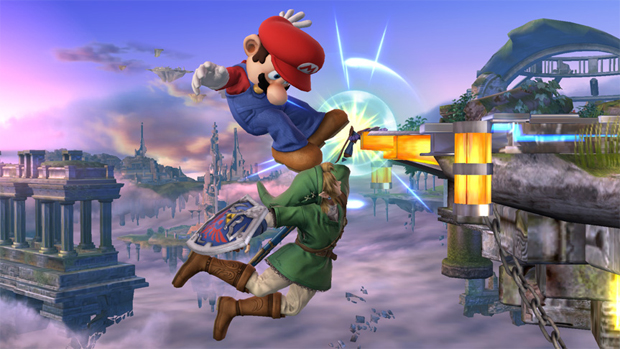 Is edge-hogging a thing of the past?

In both Super Smash Bros. Melee and Brawl, there’s a popular mechanic commonly referred to as “edge-hogging.” Since only one character can be on an edge at a time, when a character is knocked off of the stage, their opponent will often grab the edge, forcing the victim to recover by going up and over them, instead of simply grabbing the edge. Here’s a low-quality 16-second video to demonstrate what I mean.

It happens all the time in competitive play, and is common practice by now. However, in Sakurai’s “Pic of the day” on Miiverse, he has stated that “There are many changes being made to attack and defense options for grabbing edges. In this picture, Link is actually trumping Mario’s grab.” The details are obviously sparse, but Sakurai also mentions that “air time and accumulated damage will determine your period of invincibility while hanging on an edge” and “grab controls will no longer be affected by whether you have above or below 100% damage.”

There is a small window of invincibility when grabbing on to an edge, but now it looks like a player jumping off just to edge-hog will have little to no invincibility, while someone who is actually recovering will have more. Plus, word on the street is that if someone has used up their invincibility frames while on an edge and another recovering character comes to grab it, the recovering character will knock them off and grab the ledge. If this is indeed a nerf to edge-hogging, consider me a huge fan, as I view the tactic as lame and uninteresting. Perhaps now more battles will occur away from the ledges for once.