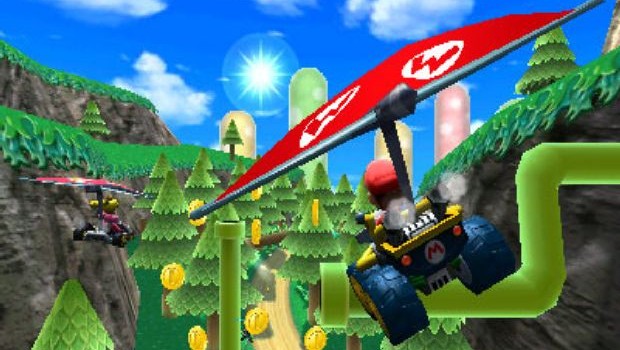 In the long history of the Mario Kart franchise, fans have been divided on which entry is the best. Many maintain that nothing will ever exceed the sheer fun of the original Super Mario Kart for the Super Nintendo, while others insist upon the DS version. Personally, I’m one of those strange folk who believes the series reached its pinnacle with Mario Kart: Double Dash!! for the GameCube.

With that in mind, I sit down to play Nintendo’s entry for the 3DS, Mario Kart 7.

One of the main features I’ve been wanting to see is, of course, the 3D effect. However, I hold off until I get a feel for the controls. As I begin my race in Mario’s signature red kart, I first get a sense of the course. The Nintendo rep at the booth tells me that, while it doesn’t have a name yet, the track will be in the final game.

A mixture of tropics, sand, and even underwater sections greet me as I use the circle pad to take corners. Almost immediately, I feel completely at ease steering in this manner. It feels smooth and natural while also giving me precise control of my handling.

As I experience the speed of the demo, Bowser and Peach both speed past me as I fail to notice the bridge ahead. I’m suddenly underwater, where a section of the track continues. The water makes the kart feel floaty without sacrificing much control over my maneuverability. 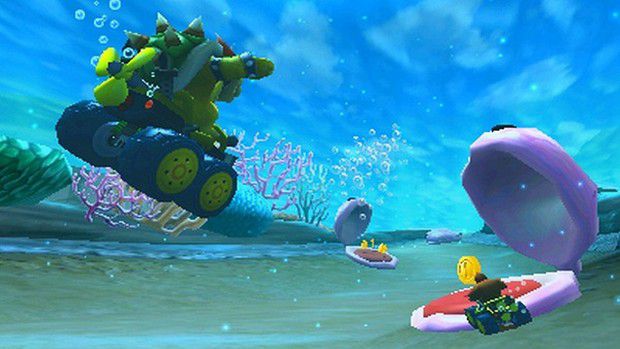 I turn the 3D slider all the way to max, and the track opens up in a way I did not expect. Platform sections become huge and engrossing, and the surrounding environments envelop the course. I have to be careful, as slight movement of the screen causes the 3D effect to ghost a little, causing me to lose concentration.

As I cross the start line, series stalwart Lakitu appears on his cloud, holding up the checkered flag. While only briefly flashing past, both him and his ‘Final Lap’ sign sit fully formed in the sky in surprisingly amazing three dimensions.

The highlight of the demo is certainly the hang gliding section. In addition to being able to now customize your karts with upgrades, a hang glider attachment is now fitted for every racer. It automatically pops out at certain points in the track, and it is great fun. Floating past Peach to gain a third place victory is a fantastic feeling.

It is regrettably a short demo, but in the end, I’m honestly shocked. I thought I was done with Mario Kart! I had been playing the series as far back as I can remember, and my interest had started to wane. If this demo of Mario Kart 7 is any indication, I’ll be jumping back into it with a great deal of excitement when it is released in December. Every aspect seems effortless and injects new life into a potentially aging franchise. I can’t wait to play more!