Steam Early Access is riddled with multiplayer shooters. The bulk of them do little to stand out in the sea of competitive games on the gigantic marketplace. Sky Noon‘s claim to fame is its strange lack of bullets.

Sky Noon is a knock-out shooter. It takes place on a western-themed series of floating islands where your goal is to use compressed air guns in conjunction with your grappling hook to knock your opponents into the chasm below.

Sky Noon pulls off its steampunk-western aesthetic pretty well. The seven currently available maps all consist of a chain of floating islands covered in saloons, mine carts, and other places where McCree might hang out.

Each player starts with a random weapon and gadget. You can swap these using pickups on the map. There are air-shooting revolvers, shotguns, machine pistols, and even a stick of dynamite that explodes into a burst of compressed air. While having a variety of weapons is nice, the only way to get good at Sky Noon is to master the use of your lasso and grappling hook.

Your primary means of traversal is the grappling hook in your left hand. You can latch on and swing from buildings, the island masses themselves, floating hazards like balloons, and even other players. Sky Noon‘s greatest success is how amazing the swinging mechanics feel. Saving yourself at the last minute by latching onto an enemy feels insanely satisfying. 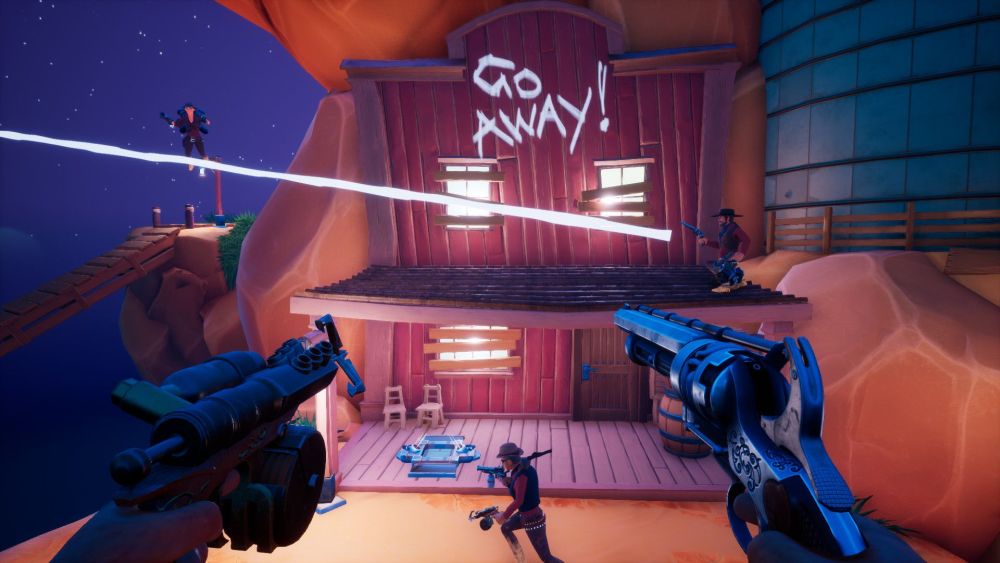 If a gun and grappling hook weren’t enough for you each player also comes equipped with a lasso. You can use the lasso to grab weapon or gadget pickups and even pull other players in for a close-range melee attack or shotgun blast.

Not every game mode is about knocking cowboys into a bottomless void. In addition to modes like deathmatch and team deathmatch, you can also participate in king of the hill matches and a payload mode where teams try and use their air weapons to propel a minecart to their side of the map for points.

If single-player is more your jam, a time trial mode that involves grappling around the multiplayer map at high speeds is a pretty good way to get used to Sky Noon‘s controls.

While Sky Noon‘s cartoon cowboy look and fast-paced gameplay are a ton of fun and easy to pick up, it isn’t without fault. The cosmetic progression system leaves a lot to be desired. As you gain experience and level up from playing matches, you’ll unlock new clothing options for your cowboy or cowgirl avatar. Getting a shiny new hat or bandanna is fine and all, but it doesn’t feel like enough to keep me invested.

Sky Noon has a unique look and premise and feels pretty polished in the control department for an Early Access game. It’s worth checking out but without some big changes to progression, I can’t see it being something worth staying with long term.