Did you know that last year’s Skylanders: Spryo’s Adventure had the best single-year sales of any new children’s IP ever in America? I figured the game would do well, but not to such a crazy extent!

Obviously, Activision has a successful new franchise on their hands and will continue the Skylanders story with Skylanders Giants. There’s a ton of new additions, the biggest being the new giant-sized playable Skylanders heroes. 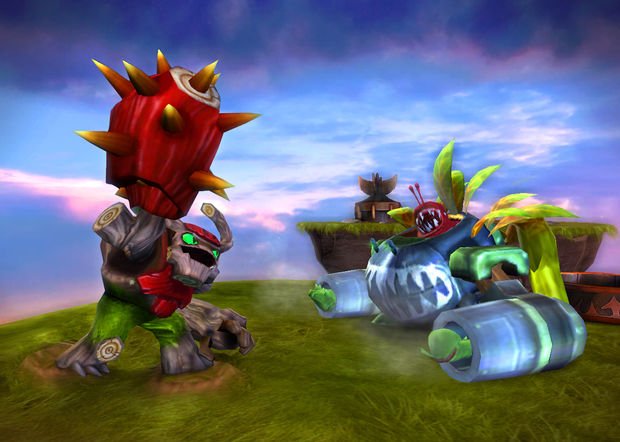 Skylanders Giants introduces 20 new characters in all, 12 regular-sized heroes and eight giants. All of the previous Skylanders toys will still work with Giants, of course, and your stats and customizations will carry over too. Plus, the level cap has been raised to fifteen, allowing you to level up all your previous Skylanders characters even further.

Another new feature for the actual toys are how the new designs can actually light up when placed on or near the Portal of Power device. Best of all, you won’t have to worry about replacing the batteries as (presumably) the Portal of Power will recharge them. 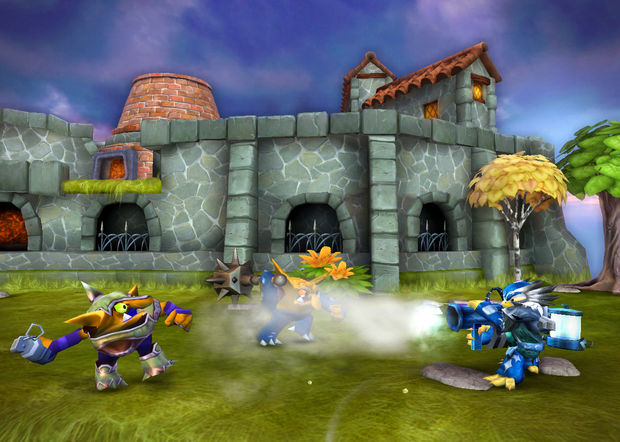 In terms of gameplay, it’s the same Skylanders you know as far as combat is concerned. The levels keep that elemental theme going too, where only certain Skylanders characters can enter certain areas. What’s largely different this time around is that there’s more emphasis on exploration and replayability. You’ll be able to find hidden areas and enter buildings where you’ll find items and other collectibles for your characters.

As far as the new giants are concerned, they definitely pack more of a wallop and have their own unique attacks, like being able to pick up large boulders that they can chuck at enemies. You’ll still have to swap with the normal Skylanders characters, as the giants can’t access all areas due to their enormous size.

Developer Toys for Bob showed off three of the new characters. One was called Pop Fizz and is a crazy magic class who throws around different types of potions to hurt enemies, and his alt attack sees him sampling his own mixtures, transforming him into a beefed-up monster (akin to a Jekyll and Hyde transformation).

Two of the other new characters were giants. The first is Tree Rex, a gargantuan walking tree monster thing. The other is called Bouncer and he’s basically Gizmo Duck from Ducktales/Darkwing Duck. Seriously. He’s a giant that wears a power suit and moves around on one wheel. Unlike Gizmo Duck, Bouncer has some real badass attacks ranging from a laser eye blast, shoulder-mounted grenade launcher, and even (literal) finger guns. 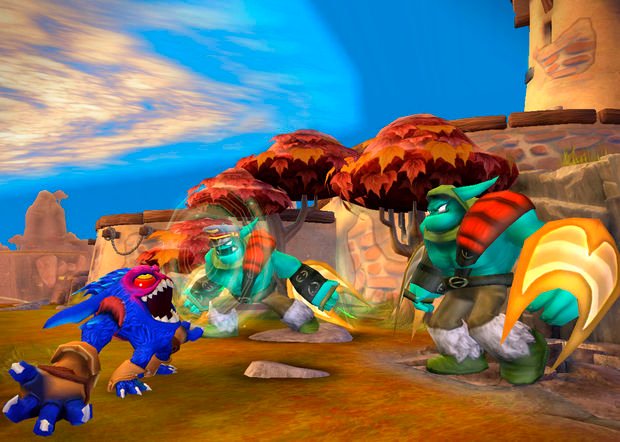 Drop-in/drop-out cooperative play is still a feature, and up to two giants can fit on one Portal of Power. Four-player versus mode is still in here too, plus there’s a survival mode called Battle Arena where up to two players can fight wave after wave of enemies.

That’s a very basic overview of just some of the new features hitting Skylanders Giants. I don’t know how Toys for Bob did it, but I kind of adore the Skylanders series. It really was a great idea merging toys and videogames in such a way that it all serves a real purpose. Needless to say, fans of the original Skylanders won’t want to miss Giants.