Skylanders Spyro’s Adventure sees the return of the lovable purple dragon and he’s joined by a wide variety of heroes. All 32 of the playable heroes will also come in actual toy form. The figures are important here as you have to have them in order to play Skylanders.

Every copy of of the game will come packed with a “Portal of Power” device, a round external adapter which plugs into your console. Every copy of the game also comes with three figures, one of which is of course Spyro. The adventure begins once a figure has been set on the portal. 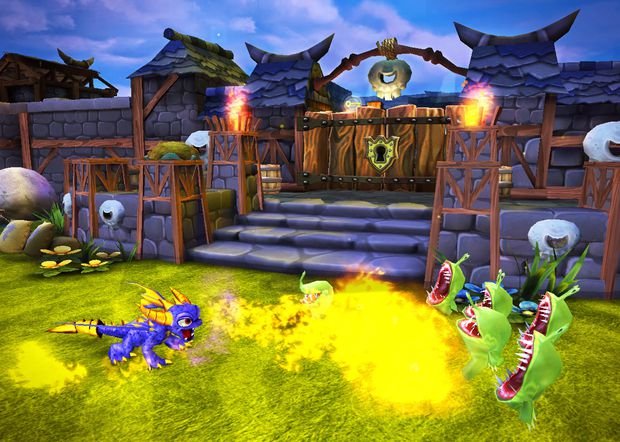 Now before you go crazy, know that the three initial figures you get with every game are all that are needed to play through the story. You just won’t be able to fully explore all parts of a level unless you have specific heroes, however. Each hero has some kind of special power (like one character is made of fire) and only that specific character will be able to open up the special area.

Anytime during your adventure, you can remove the figure from the portal and swap it out with another figure. There has to be a figure at all times so the game will be paused while you’re making the switch. Each figure also has on-board memory so all the leveling up, upgrades, loot and accessories you earn will be saved in the figures.

The reason for the memory card within the figure is so kids can easily take them to a friends house and play with someone else. The portal can accept up to two figures at a time so players can battle each other in the Power Stone-like multiplayer. It wasn’t made clear if the memory is also backed to the console, which it hopefully is as kids lose small toys very easily. 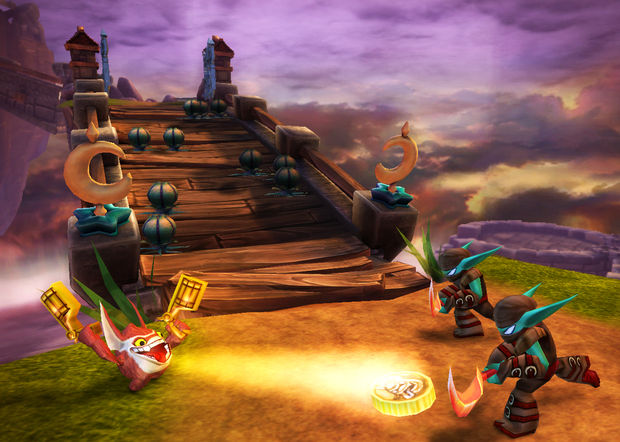 As for the game itself, I played on the Wii version and it seemed like the standard affair. The overall design is basically what one would expect from a kid focused adventure game — cute, linear and pretty simply. The overall goal is to defeat the big bad named Chaos. Chaos exiled all 32 heroes into our dimension and because there is no magic in our world, they’re transformed into toys. Putting the toys onto the Portal of Power puts them back into the Skylanders world. A cool way to get little kids into thinking they’re really a part of the adventure if you ask me.

It’s an interesting way to do a videogame for sure. At first I was against the idea of this whole concept but then I realized that kids are going to want toys based on these characters regardless of them being part of the game design. Plus like I said, you can beat the game with the three figures that come with Skylanders so you won’t be forced to buy extras. I am curious to see what the Skylanders experience will be like on the handheld, mobile and PC version of the game though.

I’m also curious as to how Activision will be selling the toys. I asked a rep on the game and while he couldn’t give me a price, he did state that we can expect various theme packs and bundles over the course of the game. As for the actual game with all the extras, it looks like it’ll probably retail around $69.99. A little on the pricey side if that’s the final price, but the overall game is expected to be 10-12 hours long on top of whatever else we can expect out of the multiplayer.