I doubt it surprises anyone, but my excitement for Unchained Blades stems from my love of the game’s soundtrack, which was released last year. While it features a main theme by Nobuo Uematsu that sounds a lot like Iron Chef, the true star is Tsutomu Narita. He has crafted an amazing soundtrack that combines modern instrumentation with fantastic melodies that will remind you of some of your favorite SNES-era RPG soundtracks.

After getting some hands-on time with the game, I can tell you this is an RPG for hardcore gamers. Prepare for a long and incredibly challenging adventure full of memorable characters and an interesting story. There’s a lot going on in this game, so let’s dig in.

First, the premise. Unchained Blades takes place in a world where people are granted a single wish if they can complete a trial and reach the Goddess Clunea. Our main protagonist, Fang, the emperor of dragons, approaches Clunea without a wish, but rather a demand that she divulge the name of the strongest creature in the land so he can defeat the beast and take the title for himself. Offended by Fang’s arrogance and bad attitude, she banishes him and strips him of his dragon powers. Now, bent on revenge, Fang acquires allies and explores massive titans that litter the land in search of powers to help him reach the Goddess once again and exact his revenge.

As it turns out, Fang is only the protagonist of one of the game’s four chapters. Each chapter features a different cast of characters, all of whom are beautifully animated and voiced (at least from what we heard today, the quality of some of the voice-acted story bits have been questioned).

We were also introduced to Hector, a golem who wants to reach Clunea to wish for a human form (apparently his golem form is too big and intimidating for his liking), Lapis, a medusa who wants to be rid of her curse of turning people to stone (she has clothing that covers the snakes on her head), and Mari, whose motives are unknown. All of these characters come together in the final chapter for what’s been promised to be an epic finale. 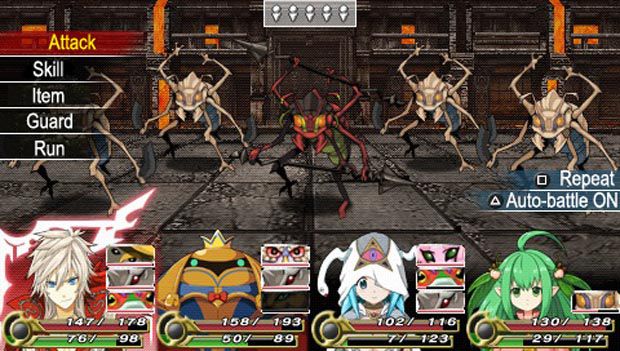 In terms of what you’ll see, towns are navigated through a menu, allowing players to interact with NPCs and perform a variety of fetch and monster-hunt quests that reveal some backstory about the game world and the characters that inhabit it. You can also craft items and stay at an inn operated by a strange half man, half woman doll.

Dungeon exploration happens in first-person in a classic Wizardry-inspired style. Even strafing is intact. The dungeon we saw was the innards of the Titan of Daris, which had a fire theme, but other dungeons have water and desert themes to name a few. The dungeons are large with multiple floors with lots to explore. Fortunately there are shortcuts that are accessed as players progress to aid in exploration of the latter areas of a given dungeon. The 3DS version of Unchained Blades (it will also be released on PSP) will display a helpful map on the bottom screen as you’d expect. Players will encounter puzzles and enemy encounters as they proceed.

Battles happen in a separate screen, also in first person. One of the innovations here is that enemies can be placed in different positions, including head-on and to the side. There are spells and attacks that target different areas around the party, so this adds a strategic element to the battle system.

We were told that these battles are intended to be hard, and when first entering a dungeon, you’ll likely only be able to complete a few before needing to head back to town to heal up. You’ll eventually level up and be able to progress more rapidly, but be ready for what XSEED describes to us as a “punishingly difficult” experience. 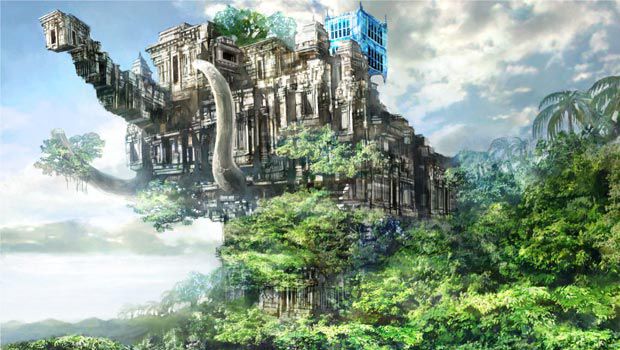 The whole “Unchained” part of the game’s title comes from the fact that you can acquire enemies as followers. Most enemies can be unchained, and your chances improve as the enemy’s health decreases. Each character can have up to three followers assigned, and benefits include attacks or healing during battle or stat increases.

Unchained Blades is a 50- to 60-hour adventure and is due out this year as a downloadable title for both the Nintendo 3DS and PlayStation Portable. Based on how great the soundtrack for this game is, I’d probably have played this anyway, but consider me sold after seeing it in action today. Unchained Blades seems to combine the nostalgia of classic first-person dungeon crawlers with a compelling cast of characters, some amazingly vibrant anime-style graphics, and one of the best handheld soundtracks of the year.

Have you been following Unchained Blades and have any thoughts about the game? Will you be picking it up later this year?