Let’s get this out there now: Yes, there’s liquid. But this is not World of Goo. It’s also not Fluidity. It’s its own thing, and it’s pretty cool. Yes, there’s physics with the liquid, but PSN and XBLA release Puddle has you tilting the world to manipulate different types of liquids to move the liquid to a target destination. You’ll slosh around everything from water to molten metal through some pretty weird locales, and each liquid has its own properties and weights.

Read on for our hands-on preview of Puddle.

Puddle was the winner of the 2010 GDC Independent Games Festival, Student Showcase division. It began as a project  by six French students, and now it’s coming to Xbox Live Arcade and PlayStation Network this summer. It can be played with a standard controller, but the PlayStation Move is also supported, as is the SIXAXIS tilt sensors in the PS3 controller. I had a chance to wobble a Move controller around for a bit to try Puddle out.

The first bit I tried was kind of gross and cool at the same time. A glass of water moved through a sort of X-ray of the human body. The water passed through the mouth and various tubes, splashing around as water would. Each liquid has its own properties, so the water easily hit throat walls and created droplets. This is bad, as the goal of the game is to get as much of the original liquid to the end point as possible. Splashes cause you to lose some. Lose too much liquid and you’ll have to start over. 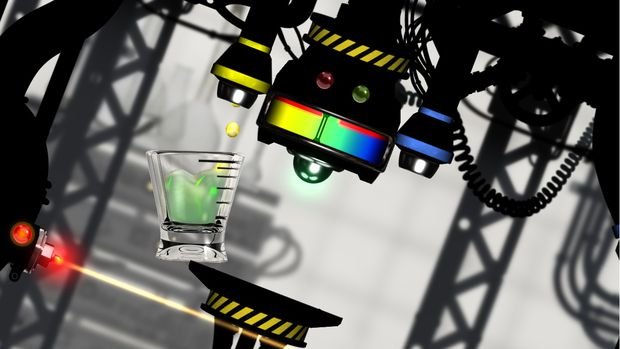 In another stage I had to move herbicide down trees, branches and other plants. All the stages of Puddle have a very cool visual style, with a pronounced foreground and background, and stylized lighting. I had to carefully tilt the world to make sure that the thicker, yellow liquid missed danger spots. Crossing over branches to land in smaller holes required a lot of precision. Momentum also came into play — some tilts had to be quick and very precise to make sure that the mark was not missed. Water at the end of thinner branches caused the branch to bend. Between all the splashing, missed ‘jumps,’ and evaporation, I lost too much liquid.

Puddle is a neat blend of platformer and puzzler that manages to be both challenging and relaxing at the same time. There are other liquid games, and there’s surely other physics-based platformers, but this one is pretty original.