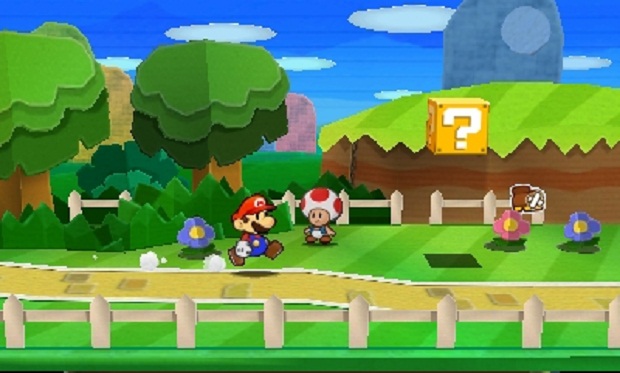 Of all the games here at E3, I was really hoping to get some time with Paper Mario, as it is one of my favorite series of all time.

Luckily, there was a demo played for us last night at the special Nintendo 3DS event. It wasn’t playable, but we were treated to a ton of new details about the promising game.

I will forgive you, Nintendo. For now.

First thing I want to get out of the way: There were no partners in the extended demo we saw. This got me nervous. What is a Paper Mario game without the myriad of fun and unique partners that can join your party in the game? No word on whether partners will be in the final game — outside of the one lone screenshot in the gallery that shows someone named “Kersti” who may or may not be an actual partner — but in the demo, at least, they were absent. I am holding out hope they make an appearance in the final game.

Also strange and a little troubling: There are no experience points in Paper Mario: Sticker Star. Yeah, I know. Between this and the lack of partners, things sound scary for this new sequel to the charming RPG series.

BUT NOT TO WORRY! From what we were shown, the game still looks pretty great.

-Replacing experience points are other ways to “level up” your character. By discovering secrets, hidden chests, or helping out NPCs, Mario is awarded bonuses that will boost his maximum heart points. This replacement is a little odd for fans of the series, but, in practice, it looks like it will work just fine.

-The “stickers” from the title really do make up a bulk of the gameplay. In battles, you don’t have normal menu-based selections like usual. You actually attack, block, and use special moves by selecting stickers from your giant sticker book and placing them on-screen. The stickers seem to be everywhere in the world, but I am curious to see what happens if you ever run out. Can you not attack? Can you “recharge” your stickers somewhere?

-Usually, only one sticker can be used in a battle at a time, but there is a fun new mechanic during battle that’s let you use your coins to take a chance on a slot machine. When this slot machine is activated, Mario can try for more sticker slots to attack more than once. Also, if all three slots are matched, a huge bonus is awarded, like coins or more stickers.

-Environmental stickers look like the most fun in the game. At times, Mario will run into giant objects that are rendered as if they are from the “real world.” Seriously, there is one point where he finds a fan that looks like an actual fan. He can collect these items and bring them to a magic wall and transform them into stickers. From here, he can use these stickers to solve puzzles later in the story. It’s a pretty cool addition and seems to add a lot to the game.

-As far as the look of the game, the graphics look just as topnotch and stylish as the previous games in the series. We obviously couldn’t see the 3D effect, but I imagine Paper Mario being the perfect game to display this featured effect.

-The general gameplay is also the same gameplay you know and love. Battles are turn-based and involve hitting the buttons at the exact right time to do extra damage or block attacks.

-Only a tiny piece of the game was shown, but a town was talked about during the demo. This is a good sign, as I want the final game to be as robust, long, and RPG-like as the older games in the series. The Paper Mario RPGs have always had such great stories set in such a huge world, and I don’t want to lost that in the transition to a handheld.

Final thoughts: I thought the demo of Paper Mario: Sticker Star was really solid, with great graphics and a welcome, refreshing sense of humor that the series has always been known for.

But I am not going to lie that I am just a tad bit worried. Not that the final game won’t be great. Nintendo makes great first-party games, and this looks to be no exception.

I am just worried that the final game won’t be as epic in length and scope as the previous games in the Paper Mario series. With no experience points and the chance of no partners, I am slightly concerned that some sacrifices were made to put the game on the 3DS. Also, I still have yet to see a giant variety of worlds and characters, which also gets me a little nervous.

But I only saw a short demo. All these fears could be put to rest when the game releases this holiday season.