Square Enix has a 3DS exclusive game coming out next year. It’s an action-adventure RPG that’s playable for up to four players cooperatively, online or over WiFi, with seamless drop-in/drop-out support. Tim Schwalk, producer at developer n-Space, told me that they’ve been waiting for Nintendo to want to support full online connectivity, and that now they’re wanting to take full advantage of that.

What they’ve done is create a fully online cooperative action console-ish game with Heroes of Ruin. They’re going all out with Nintendo’s new portable and its support for online, meaning that you’ll even see full voice-over-IP support. I know this feature set sounds like a daydream on a Nintendo game system, but it’s really happening, and I’m glad to see that.

In Heroes of Ruin you take the role of one of four mercenary character classes trying to find the person that put a curse on the city of Nexus. The action is combo-based. The B button can be pressed multiple times to execute combos, or held for charge attacks. All character types have unique abilities. For the Vindicator, the charge attack pulled all nearby enemies closer to make them easier to attack. Other commands, menu options, abilities and more are all smartly equipped to the bottom touchscreen. In the middle of the buttons you’ll find an area map. Special moves are assigned to the remaining face buttons, and are fully customizable.

I saw two of the four available classes, the Vindicator and the Gunslinger, in the multiplayer demonstration. The other two, Architect and Savage, will be shown at a later date. I played as a Vindicator after customizing my character’s color, hair style and more. I jumped into the demo level and learned that all levels are dynamically created, and that enemy types are randomized, which will make every replay different. I played co-op with Schwalk. We made our way through the foresty stage, taking out enemies leading up to a sub-boss that needed to be stunned to take out a weak spot. I was able to use one of my abilities to throw out a healing ring to help protect us from the heavy sub-boss attacks. 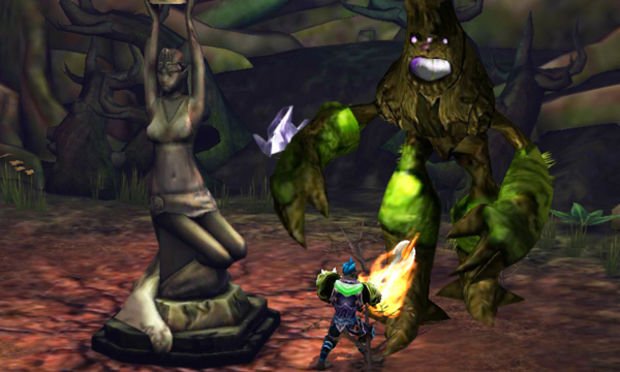 As you’d guess for a 3DS game, Heroes of Ruin supports 3D. n-Space isn’t trying to do anything crazy with the 3D, though. It’s complimentary, and not like a poke in the eye. You won’t ever need to use it, but it looks nice, and gives the various locales some depth.

Street Pass functionality is also supported. The Trader’s Network lets you send the games you find during gameplay to offer up to other players of the game you happen to pass on the street. There’s thousands of items in the game, so this was created as a way to give players access to items they might not have uncovered themselves.

n-Space has also worked web connectivity into Heroes of Ruin. The game’s website will have a new Daily Challenge every day that will present a challenge you can take on in-game to get loot or online goodies. More connectivity will be announced later.

Heroes of Ruin is fun, approachable co-op adventuring game with a quest-based, leveling up structure. The kind I like. What’s surprising is that even after only about six months in development it gives the feeling of a console co-op action experience even though it’s on the small screen, and that it comes complete with skill trees, character customization and full online play. It’s a big game for your pocket, and it feels like something that wasn’t possible on earlier portables.