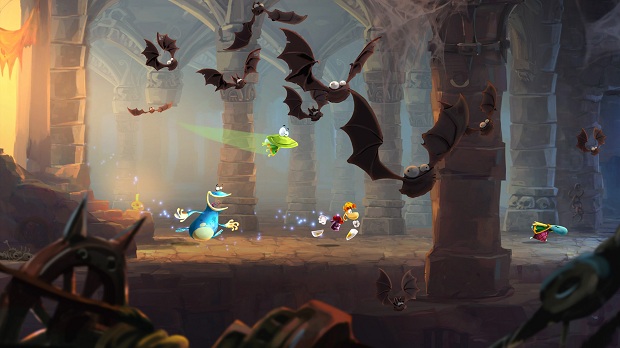 The good news if you were a fan of Rayman Origins: Rayman Legends is even more beautiful, gorgeous, and sublime than its predecessor! So great, in fact, that I almost wanted to punch the fancy T.V. screen when I was playing it. I couldn’t hold in all the emotions of how amazing the game looks!

Luckily, I did not punch the screen — whew! — as that would have ended poorly for all parties involved.

So why is Rayman Legends so spectacular? Keep reading to find out! 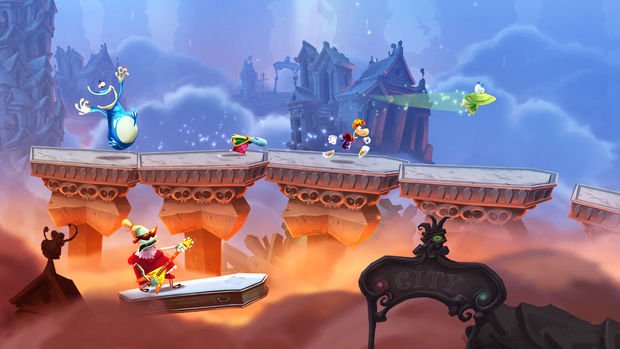 This game will make you want to buy a Wii U. It is that good. So far it is a Wii-exclusive, and, if it stays that way, this game could really be a system seller.

If Pikmin 3 wasn’t in the picture, Rayman Legends would easily be the best Wii U game I played at the show.

Even me typing this hyperbole feels a little crazy, as the only thing on-display for Rayman Legends was the game’s co-op mode. The single-player mode — and the game definitely has one! — was not playable. To fall this in love with an “extra” mode is insane. I can’t imagine how incredible the single-player campaign will be.

When I say “co-op mode,” I don’t mean it in the regular sense of the word. While you can play up to four-play co-op with four characters on-screen like in Rayman Origins, there is a new co-op mode that involves one player playing with the new Wii U Pro Controller and one playing with the GamePad. 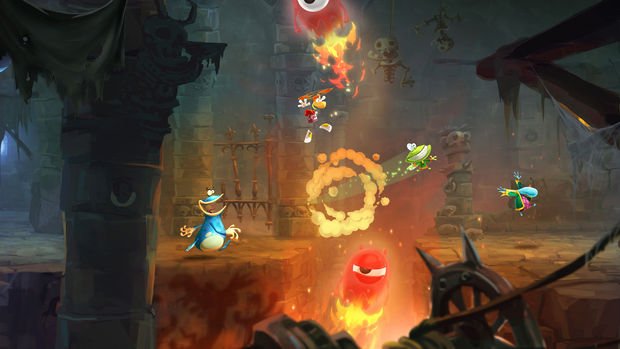 Let me break down how this works.

As mentioned, one player controls the main character on-screen with the Wii U Pro Controller (you can read my impressions on that fantastic controller right here). The other player holds the GamePad and uses nothing else but the built in touch screen.

While the first player is running through the splendid levels, the other player is “assisting” them by interacting with the world around them.

This could be very basic like the co-op mode in Super Mario Galaxy, but it is not simple at all. There is so much variety to this “assisting” that it is always interesting and fun. In fact, it is so impressive that I gasped on multiple occasions because I was so impressed with what the game was letting me and my partner do.

At first, the assisting is much easier. The second player can cut grass by swiping the touch screen to uncover shiny lums, tap on something in the background to open a secret area, or grab enemies and hold onto them to help the player. 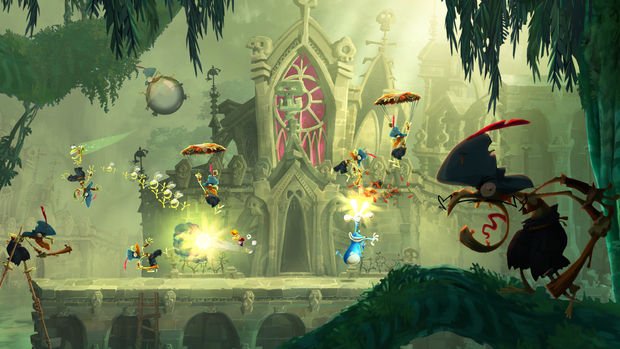 As the levels progress, things get much deeper (and much more fun!).

In one section, the second player has to shoot projectiles at dragons in the background to protect the first player. In another, player two can grab parts of the environment to help player one proceed further.

And this is some of the stuff that impressed me the most.

In one level, a huge wooden wheel was in front of Rayman. The wheel had a complicated maze-like passage through it that needs to be traversed in order for the first player to proceed. In the passage were deadly, one-touch-and-you’re-dead spikes and hooks to grab on to.

In order to proceed, player two has to grab hold of the wheel and turn it for player one. To to this, the second player taps the touch screen to lock in the hold and rotates the actual GamePad back and forth. There is no lag and everything is smooth and intuitive.

When the wheel is placed in the right direction, the first player can move forward. This dance between both players takes a lot of cooperation, and, when successful, is ridiculously satisfying.

There were several puzzles like this, and they were all extraordinary. 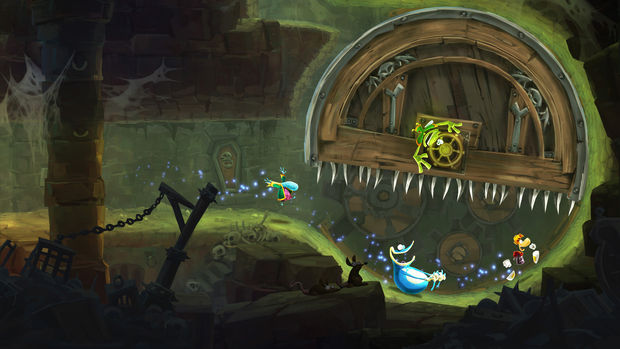 And then the second part of the demo started.

I was already impressed by everything I played, but the second part of the demo involved Rayman running through a fast, auto-scrolling level timed to the music being played and activated by the second player.

It’s hard to describe unless you see the video (watch it right here!), but, basically, every jump, item grab, and movement the first player makes is timed to the music playing in the background. To help with the beat, the second player can tap on-screen statues.

It is unbelievably cool and one of the most impressive levels I have ever seen in a 2D platformer. 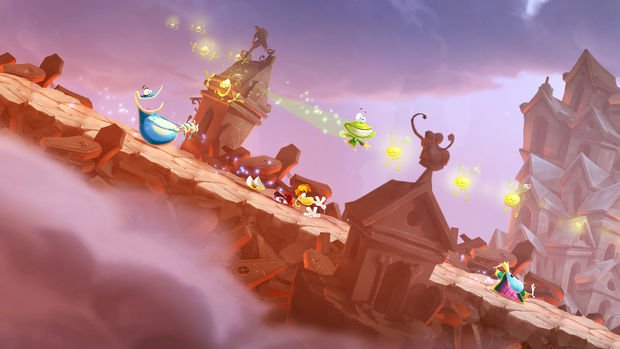 I didn’t think it was possible, but Rayman Legends looks ever better than Rayman Origins. And, keep in mind again, that I saw only two small sequences in the game. I can’t imagine how amazing everything is going to look when all the various levels are opened up.

Ubisoft and Nintendo were smart to show off the co-op version of Rayman Legends on the Wii U. A single-player demo would have been a nice bonus, but we already know what that is going to look like — we have Rayman Origins to play over and over.

With Rayman Legends, Ubisoft has taken things to a whole new level.

The game looks incredible, it plays just as well as its predecessor, and the Wii U-specific co-op features are fun and never once feel gimmicky.

Rayman Legends is a masterpiece in the making. If the final game is as strong as the demo, this could be some serious Game of the Year stuff.