Only two more left! This is the fourth in a series to preview all of the games within Nintendo Land for the Wii U. You can check out the other three here, here, and here!

I swear, I really had a great time with the Nintendo Land games. Now, I am not saying this because I love Nintendo so much. When I went to play Nintendo Land I had kind of low expectations. The games looked fun, but I was worried they wouldn’t be different enough, and, even worse, just wouldn’t keep me entertained.

Turns out I was wrong! Yay! The Nintendo Land games were pretty great, with Animal Crossing: Sweet Day the one that surprised me the most!

Why did this game surprise me? Well, when I saw video of it, Sweet Day looked the least interesting of all the Nintendo Land games. The good news: It’s not. It’s actually very fun!

Although somewhat similar to Luigi’s Ghost Mansion, Sweet Day has enough differences to make it feel unique. In the game, four players control the townsfolk with the Wiimotes, while one player controls the evil chefs with the GamePad.

The other four players have to run around the screen and collect pieces of candy. This can be accomplished by two players standing next to each other on a set of buttons. Once done, the candy flies out of a tree and all over the screen.

In total, 50 pieces of candy are eventually released into the Animal Crossing-themed arena. To win, all four players have to pick up all 50 pieces between them. When attacked by a chef, all candy is dropped and the player is stunned. If all 50 pieces are collected in the time limit, the players win! 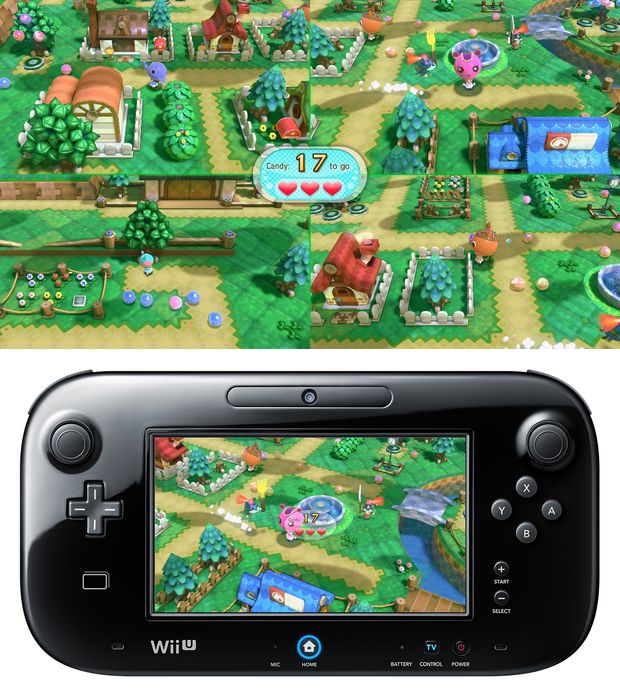 What is really neat about the game, is that when you pick up a piece of candy, your character starts to slow down. Pick up a couple dozen and you almost grind to a halt. This makes it almost imperative to split up the candy collection between the four players, as when you start to move really slow, the chefs can easily stab you with their giant knives. Yup, they have giant knives.

Although simple in concept, there is a surprising amount of depth to Sweet Day. Something I wasn’t expecting at all.

This polished, colorful little game is a welcome addition to Nintendo Land and very fun with five players. It was a good time!