Okay, now THIS is what I’m talking about!

But how does the game play? An exciting reveal is one thing, but it doesn’t matter if the game itself is not very good. Luckily, there is nothing to worry about with Luigi’s Mansion 2. The game is awesome. It is an improved, polished, highly addictive sequel, and one of my favorite games at the show! 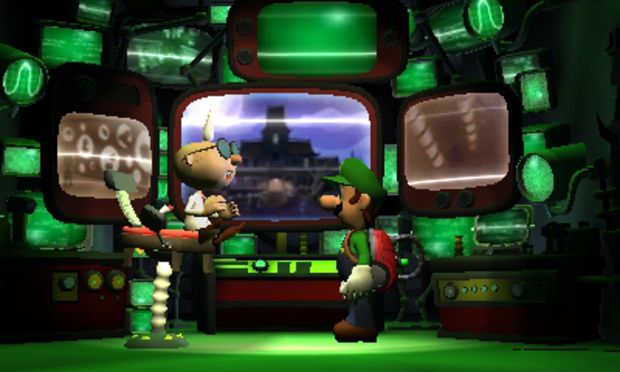 The demo of Luigi’s Mansion 2 begins with Professor E. Gadd telling our scared main character that a mansion has been haunted by ghosts! Naturally, it is Luigi’s job to go in with his Poltergust 3000 and clear the house of all the spirits and apparitions!

It was revealed in the Nintendo press conference that Luigi’s Mansion 2 will contain several mansions — not just one, like in the first game. This is welcome news, as if there is any complaint I can think of regarding the first game, it is that it lacked variety. Hopefully adding more mansions will mix things up a bit.

As the game begins and Luigi walks up to the mansion, it is immediately apparent how gorgeous the game is. There is something about these 3DS games that just looks really good! Colors are crisp and clear; animation is smooth; everything just has a real polished look about it.

And then there is the 3D. My God. It feels like the 3DS was designed with Luigi’s Mansion 2 in mind. 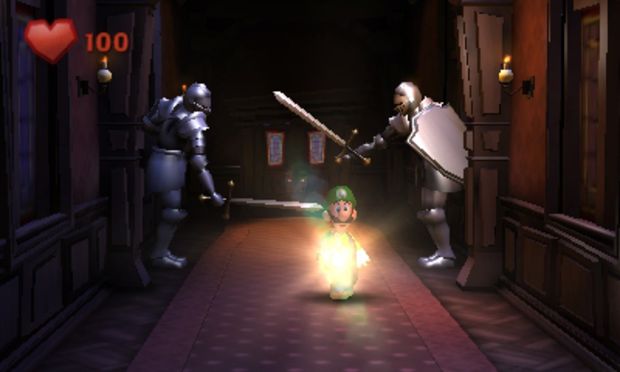 For people that are familiar with the first game, Luigi’s Mansion finds Luigi as he runs in and out of long, winding hallways and detail-filled rooms. Seeing all this architecture and design in 3D is truly something to behold. The game looks amazing. Maybe the best-looking 3DS title I have seen to date!

Gameplay-wise, there wasn’t much to do in the demo, but what there was felt great — very reminiscent of the original game.

In the game, Luigi is equipped with the aforementioned Poltergust 3000 and must navigate the mansion, using the powerful vacuum cleaner to discover secrets and, most importantly, SUCK UP MEAN GHOSTS!

To do this, players must control Luigi with the circle analog pad (using the “B” button to run faster) and shine his flashlight around the dark mansion to reveal ghosts and find hidden objects.

When a ghost is discovered, Luigi must first hit it with a strobe attack by pushing “A” (holding this down makes the attack more powerful). This stuns the ghost. At this point, the player holds down the R-trigger and gets to suckin’! (I need to use that term in more stories.) 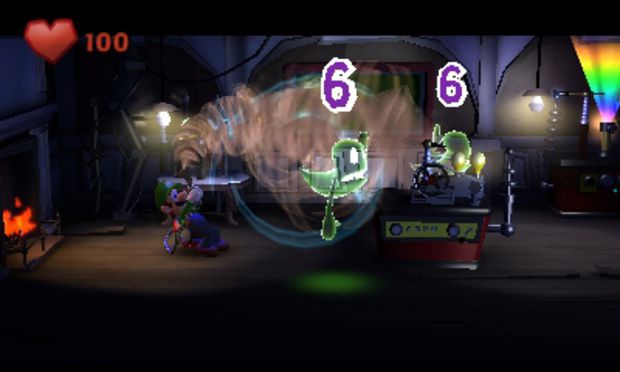 While sucking in the ghost, Luigi must pull in the opposite direction to lower the ghost’s hit points. Once these hit points reach zero, the ghost is captured! While the ghost is being sucked in by the vacuum, it will fly around the room, dragging Luigi with him. If Luigi can avoid getting hit by other enemies or objects while this is happening, an “A” prompt will periodically pop on the screen. By hitting the “A” button, the ghost gets jolted with the strobe, resulting in a bonus +5 amount of damage.

There is some strategy in sucking up ghosts as well. Some don’t go easily and must be attacked using different techniques. One ghost, for example, holds a shield to block Luigi’s flashlight beam. Not until the ghost raises the shield can Luigi stun him.

While fighting one of the bosses, Luigi can only reveal the nasty ghost by hitting it with his strobe attack. Trouble is, his is completely invisible and can’t be seen. To find him, the player must watch for little details on the screen, such as candles that blow out or book pages that flutter. By following these clues, Luigi can find the ghost and attack! Awesome stuff!

While sucking up ghosts is unbelievably addictive (and, trust me, it is addictive), a lot of the fun of Luigi’s Mansion 2 can be found in just exploring the mansion itself. 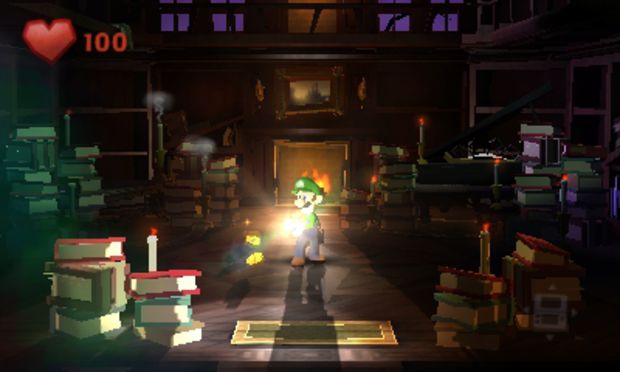 As mentioned before, the mansion is beautiful to look at, full of tons of details in the architecture and decor. And almost all of these details can be manipulated in some way!

Remember the first time you sucked up a curtain in the original Luigi’s Mansion and marveled over the cloth physics? Well, that happens all the time in Luigi’s Mansion 2, as you will constantly be pulling away curtains, tablecloths, and spider webs to uncover hidden secrets and much-needed cash and coins.

And, like the first game, some rooms cannot be accessed without keys. Finding these keys in Luigi’s Mansion 2 was really fun and interesting. Some keys are easily found in hidden chests, while others can’t be obtained until a certain ghost is defeated.

The demo available on the E3 show floor is very simple, and only seems to show off the most basic of things that can be done in Luigi’s Mansion 2. But it is still a blast! I can only imagine the amazingly creative stuff that will be experienced once the game opens up more.

After playing the game, I am SUPER excited to play more of Luigi’s Mansion 2. This is a launch-day purchase for me, no question. I can’t wait!