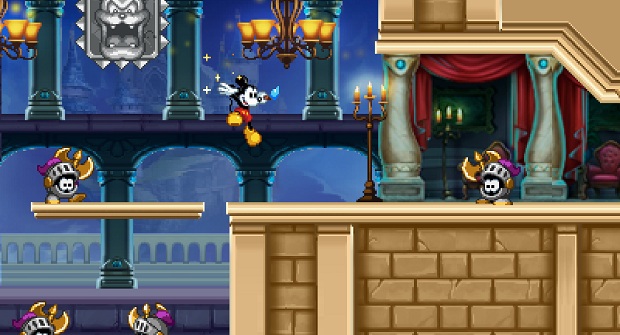 I haven’t made a final decision as to what my favorite game at E3 2012 is yet, but Epic Mickey: Power of Illusion for the 3DS is right up there.

When DreamRift’s game was announced a couple of months ago, I was shocked. Instead of just being a straight port of the 3D Epic Mickey sequels on other consoles, Epic Mickey: Power of Illusion is a brand-new 2D platformer releasing for the 3DS.

And just look at the game. It is beautiful. If you are a fan of any of the old Capcom Disney games for the Super Nintendo, you are going to lose your mind over this. 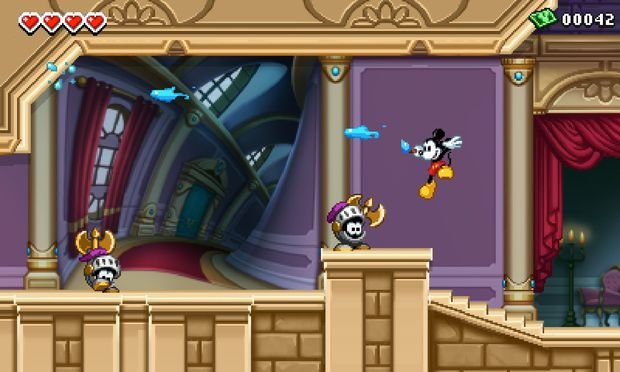 Epic Mickey: Power of Illusion was inspired by the classic Mickey platformer Castle of Illusion for the Genesis. This inspiration shows from the minute you start the game. The graphics — while obviously improved for the slick 3DS — look very similar. Even the animation and controls are very reminiscent of the original classic … but I am getting ahead of myself.

Not much is known about the story in Power of Illusion, but, as in Castle, Mickey is tasked with journeying through multiple Disney-themed worlds to put an end to the evil witch Mizrabel (who looks eerily similar to Maleficent from Sleeping Beauty).

Along the way — and this is the best part — he will run into and rescue many Disney characters from different movies and TV shows. Seeing these awesome characters in the game was both surprising and exciting. As a huge Disney fan, I squealed with happiness when I found Scrooge McDuck and smiled when I talked to Rapunzel. The whole gang is included, and the game’s creative director, Peter Ong, promises there are many, many appearances in the final game.

To control, players use the slide pad or D-pad to move Mickey around the screen. Jumping is done with one button, and, like, Castle, a stomp is performed by hitting the jump button once again. You can also shoot paint and paint thinner projectiles by pushing the attack button.

These controls, while very similar to Castle of Illusion, are only the very tip of the amazing iceberg. 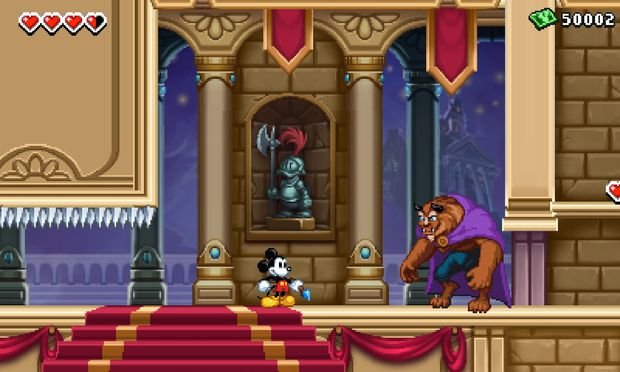 Like its console Epic Mickey counterparts, in Power of Illusion, Mickey can use paint or thinner to draw objects or take them away. This is done using the touch screen of the 3DS. When an object can be interacted with, it will appear glowing in the map on the bottom screen. By tapping this, a “paint” screen will be shown.

In this screen, players will have to “paint,” or outline, the object to make it appear, or erase it with the thinner to make it disappear. While only a few levels were shown in the demo, this technique was used to fantastic effect. Sometimes it was simple, just having to erase a vine blocking your path or painting a block to stand on.

Other times things were more complicated. In one section, a series of cannons was on the screen that Mickey could launch himself with. Some cannons needed to be painted and some needed to be erased in order to form the perfect path to move on to a high platform. Since the action pauses when painting, some of the cannons had to be painted while in mid-flight. It made the sequence not just about strategy, but timing as well.

To add more detail to a constantly deepening game, the painting mechanic is graded on how good of a job you do with painting the items. The better you do, the better rewards you get. For example, if you paint a stone column perfectly, fewer enemies will attack in the next section. If you do a bad job, more enemies may be waiting for you further on in the level. 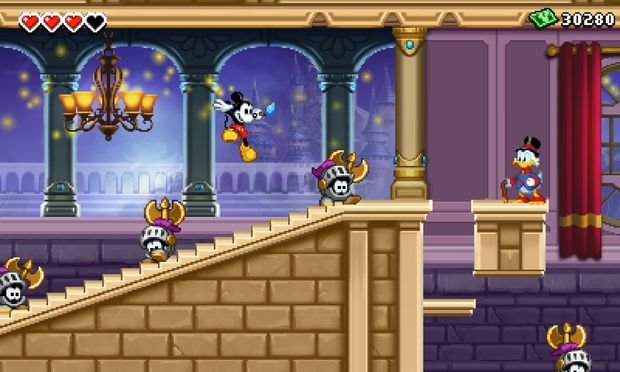 In addition, special painted objects can be found, unlocked, and carried with you throughout the game. As in Metroid, these acquired powers can be used at any time and help you access hidden areas and defeat enemies.

In the demo, you could carry two special objects. One was a “Thwomp”-like enemy that would crush anything underneath it (even Mickey!). By drawing it anywhere on the screen, the monster will slam down and destroy anything underneath it. This is very helpful in defeating enemies that may be a little out of reach or guarding a tough platforming section. And, again, if you paint it perfectly, the enemy is more powerful and slams to the ground more times.

The other item was a chest that would release helpful items such as money, more paint, or helpful hearts.

The graphics and animation in the game are truly wonderful. DreamRift’s other games — Henry Hatsworth and Monster Tale — have very similar, 16-bit retro graphics, but Power of Illusion seems to look even better! It’s hard to tell in the screenshots, but parallax scrolling is in full effect, with backgrounds and gorgeous out-of-focus foregrounds looking incredible. And seeing this all in 3D makes everything look even more colorful and stunning. 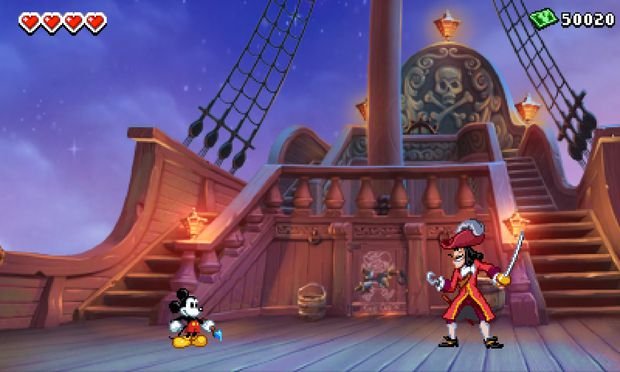 If this was the entire game, it would be great. But there is so much more!

After rescuing the numerous Disney characters, they will return to your castle and find shelter in one of many rooms. These rooms can be upgraded to look more and more like scenes from the characters’ respective universes. For example, I upgraded Scrooge McDuck’s room and it was a perfect recreation of his office from DuckTales (complete with giant vault door!).

And these upgrades aren’t just aesthetic. After fully upgrading, characters will help out Mickey on his quest! Some may open a shop to sell helpful items, others may offer new powers, and others will assign side missions that can be completed for even more fun rewards!

There is so much to do in Epic Mickey: Power of Illusion and so much to gush over. It truly is a beautiful game with fun gameplay, clever mechanics, and many surprising Disney appearances.

I can’t wait for Power of Illusion. As a fan of both retro 2D platformers and Disney, this game is a dream come true.