Let’s face it, the current Nintendo 3DS library is a bit disappointing. Even if you don’t agree with that sentiment, it’s not debatable that Capcom’s support for the system has been nothing short of impressive.

Its port of Super Street Fighter IV was spectacular, and the upcoming Resident Evil: The Mercenaries 3D looks solid. Still, neither game truly brings original content to the handheld. That all changes next year with Resident Evil: Revelations, a fresh and true installment in Capcom’s popular franchise.

Going hands on with a small area of the game is proof enough that Capcom’s on the right track, bringing true survival horror back to the series. In doing so, it’s managed to put it on my radar as one of my most anticipated titles for Nintendo’s little 3D handheld.

The demo opens up with Jill Valentine lying on a bed in a small room. She wakes up, confused as to where she is. If you’ve been paying attention to Revelations, you know where she is — the game takes place on a large ship. Why Jill is so confused is anyone’s guess; when her partner radios for her,  she’s obviously clueless.

“The room feels, familiar,” she says, before taking a beat. “It looks like I’m in a mansion.”

A spooky mansion (even if it’s just a fake one on a boat) in my Resident Evil again? A game after my own heart! The similarities to Resident Evils of old don’t stop there, as Revelations is more like the classics than any game the franchise has seen in years.

After getting up and moving about the guest cabin, I find I’m trapped in the room, a door locked by a security box between me and freedom. I move Jill towards the bathroom. Inspecting the bathrobe, which is filled with dirty water, the game prompts me for action: do I want to drain the tub? Sure, of course! Why not? The water washes away, revealing a screwdriver. I move on, sure I’ll find some use for the tool soon enough.

I move back into the room, and my first “oh crap, what the hell!” moment comes as a monster bursts from the closet. I can’t identify what it is, but it’s certainly not human, its long arms dragging alone the ground. As it moves slowly towards me, I pepper it with bullets from my handgun and it eventually drops to the ground into a boil pool of ooze. 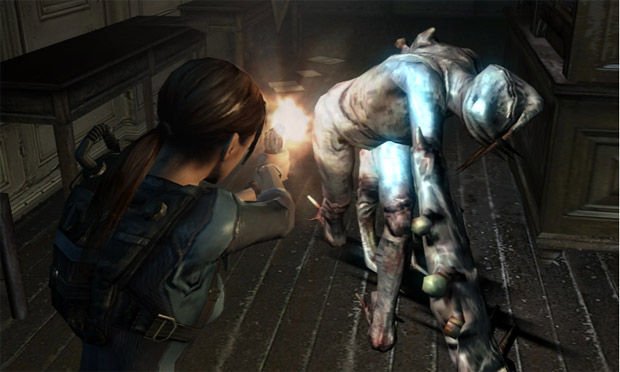 Taking a breath, I move to the security panel adjacent to the door, and use the screwdriver I found lying in the bathtub early. Using the bottom screen of the 3DS, I “twist” off the screws to reveal some internal circuitry. In sort of a mini-game, I move balls around to connect lights on a grid; once I do, the door opens.

I head down a dark hallway, picking up an herb along the way. I eventually reach an open, large dining room. Low hanging fog obscures tables which have been set for a meal, but it’s nearly impossible to see anything else. I head up a large staircase which I can see in the center of the room, and head through a door at the top of the stairs.

Here is where I find the “Supply Scanner” which can be used to search areas for hidden items. Pulling up the scanner puts you into first-person perspective, and brings up a Metroid Prime style overlay HUD. Once an object is located, you’ll press Y to scan it and bring it to view. I use the scanner in the hazy dining room, finding additional ammo, but nothing much else of use.

The next area I enter is a small antiques room, in the center of it a shattered glass case. That’s when the monsters come in. They’re all over the place, and I spent much of my ammo trying to put them out of their misery. When a bigger creature, one with a large bulbous deformity on its back, enters the scene, I know I’m screwed. I run for and call an elevator, which whisks me away in the nick of time.

The demo ends shortly after that, with Jill meeting up with her partner before she’s grabbed from behind from a man who looks like series pain-in-the-ass Albert Wesker. The demo cuts itself short at this point, leaving me with more questions than any real answers. 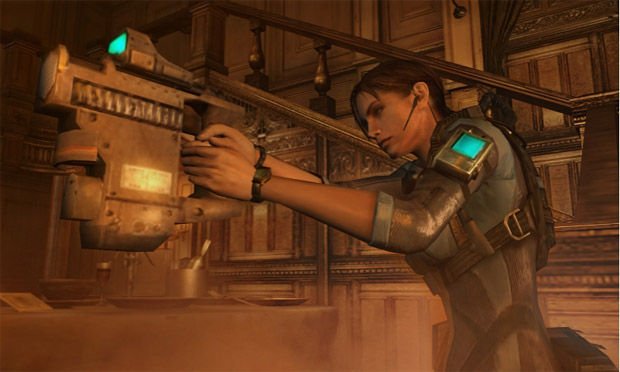 What I do know is that the game seems to hit the sweet spot between new-school Resident Evil controls and old-school Resident Evil terror and exploration. Finding a screwdriver in a bathtub? That’s survival horror in its purest form, right? Now we just need to find some medallions with animals on it that we can shove into statues and we’re good to go.

Visually, Revelations truly shines on the 3DS. We’ve seen a few hints at the system’s power, but Capcom seems to have really harnessed it with Revelations. In 3D, areas like the fog-covered dining room scene are jaw-dropping; Capcom’s going to have quite a few opportunities to design some terrifying environments and scenarios, for sure.

The wait for Resident Evil: Revelations will be a long one; it’s not out until 2012. There will be a demo (a different area than what I’ve played) packed in with the upcoming The Mercenaries 3D, which hits shelves this summer.