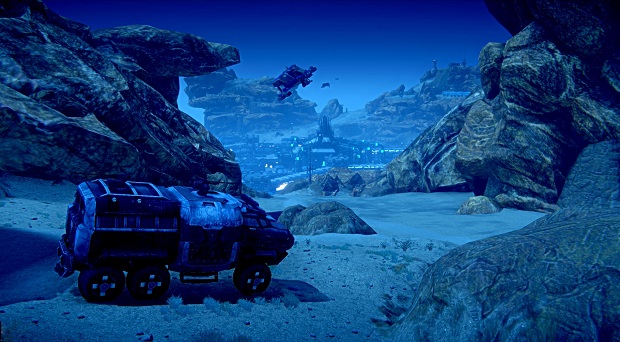 Ryan Perez, Patrick Hancock, and I all got about 30 minutes of hands-on time with PlanetSide 2 earlier today. As a free-to-play MMOFPS from Sony Online Entertainment, PlanetSide 2 is set to enter a rapidly crowding market. Where they hope to break away from the pack, however, is with big set-pieces in a dynamic, resource-focused game.

Soon-to-be competitor Firefall, for example, focuses on cooperative, community-building play. PlanetSide 2, by contrast, is closer to a standard FPS with massive set-pieces. These include huge maps that span a variety of environments including canyons, deserts, forests, and plains that are all part of the same space. Players will battle across each of these environments, setting up bases and collecting resources that people on the frontline can use to deploy tanks, transports, and aircraft.

I have absolutely no experience with the first PlanetSide game. I knew about it, but I was pretty young and probably still used AOL. Apologies if I just made you feel old. I do play a ton of first-person shooters, though, so jumping into PlanetSide 2 still came naturally. The classes don’t depart very much from the ones you’d see in something like Battlefield 3, save for perhaps the MAX, a large armored unit with no vertical movement. I ended up mostly playing the Light Assault, with his ever-so-handy jetpack, and the Medic, which allowed me to heal and revive my buddies on the field.

What really captured me was the 64-square-kilometer map. We were playing in one tiny section of the larger world, and when I hopped in an airplane and just flew east I could only think about how amazing it will be when there are smaller firefights going on all along the ground that I can drop in on. The idea of such a large, constant battlefield has me really anticipating PlanetSide 2. I’d bet that this will be one of the free-to-play titles that will remain on everyone’s hard drive for a long time. 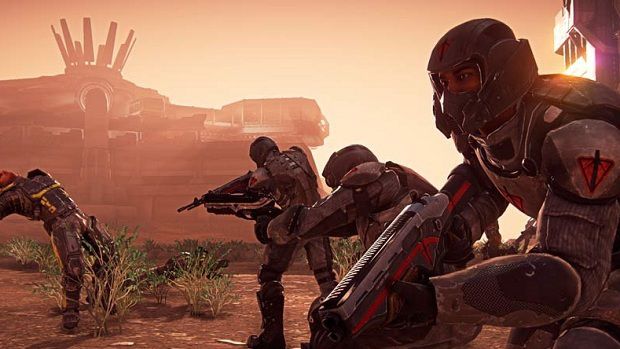 I’m absolutely in love with PlanetSide 2. Ever since I saw it at this year’s GDC, I’ve been anxiously awaiting the chance to get my hands on it. And considering how I loved the first game, it’s pleasing to see someone finally giving it the sequel I felt it deserved — not to mention carrying on an MMO subgenre that makes total sense. I was very impressed with the level of customization that’s featured in PS2. Not only do you have several weapons to unlock — plus the upgrades for each one — but your skill tree is separated into several different categories, with multiple choices within them, giving each class many different roles to play. Playing as a big-assed heavy soldier can have you either equipping anti-personnel weapons for foot soldiers, or flak cannons to deal with those pesky eair vehicles.

Then there’s the stealth, which I can’t wait to sit down and experience on my own time and really get to know. The original PlanetSide had some sweet stealth gameplay; nothing was more gratifying than hopping onto your cloakable four-wheeler, driving to a hot spot and hacking the enemy post. After seeing some of the old-fashioned, intense gunplay, I know stealth trolling will be a blast. And to add to the awesomeness of all this, the game will be totally free.

PlanetSide 2 took me by surprise. I went into it dreading the appointment, and left pretty excited. The variety and scale of the maps is patently ridiculous. In the short game we played, there were about a dozen different airships flying overhead, harassing positions, and dogfighting for aerial control, and that’s not exactly common.

My primary concern is with the longevity of the play model. It’s difficult to see how they might develop what they have into the all-important “end-game content.” While tanks and planes are great, larger war machines or heavily entrenched bases would give players a more distant goal to work towards, hopefully inspiring guild formation and activity. Then again, plenty of non-MMO shooters have done just fine with less content and less customization for quite some time without any problems, so chances are good that I’m making mountains out of molehills.

We’re all pretty excited to see where PlanetSide 2 goes and we really hope the free-to-play model works here. Look for the beta to open within the next few months, with a full launch later this year.