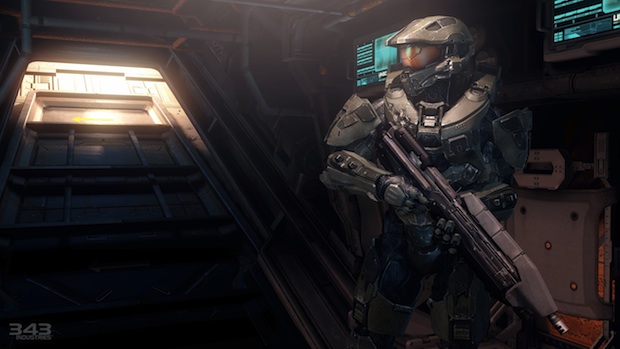 As the biggest Halo fan around here, I was really skeptical about what was going on with Halo 4. I got so hyped up after the reveal at E3 2011. But then that excitement faded due to the lack of news for a very long time.

Fast forward to this week where 343 blew everything up! We got a first glimpse of single-player, there’s a new enemy type, and most importantly of all, I finally got to go hands on with the new vision for multiplayer.

First, let’s talk about the biggest change, loadouts. I mean real loadouts, not the sort of lame attempt at a loadout system from Halo: Reach. It’s the real deal now, and you can create custom loadouts for your primary and secondary gun slots, grenade types, armor abilities, tactical package and support upgrade. Yes, it’s getting a tad bit Call of Duty-ish, especially with these last two options.

Tactical package sees you being able to choose stronger shielding, go in with two primary weapons instead of just one, faster Armor Ability recharge rate, and so forth. Support upgrade lets you choose whether you want to spawn with more ammo, a better sensor, infinite sprint, etc.

Yes, sprint is now a standard issue feature for your Spartan warrior and isn’t its own Armor Ability. About time, right? Speaking of which, the hologram and jetpack Armor Ability are back. New additions will include Promethean Vision, which gives you infared vision, and Hard Light Shield, which creates a holographic shield in front of you.

Armor customizations of course remain, and it’s the same as it’s always been. Choose from different armor designs, customize your color scheme, create emblems — everything to become the prettiest Spartan.

On the weapons front, 343 has done an absolutely killer job with the reworking of all the guns. They have such a strong sense of power behind them now. Especially the battle rifle, which is currently my favorite gun of all the ones I saw. Yes, even over the DMR. 3-round burst for the win!

Other returning weapons include the assault rifle, Covenant carabine, magnum, plasma pistol, energy sword, and needler. The only new gun on display in multiplayer was the storm rifle, the successor to the plasma rifle. It now has a long body form, much like the BR.

Once you’ve created your custom classes, it’s time for War Games, the new branding for the competitive multiplayer modes. First I saw Infinity Slayer (essentially Team Slayer) but the twist now is that you get points based on your actions. Killing, assists and whatever else you do accumulates points, and once you’ve filled up a specific meter, you can call for an ordnance drop that literally drops down power weapons, extra supplies, Armor Abilities, etc right in front of you.

Next I tried out Regicide, my favorite new mode. It’s a free for all game type where the person with the most kills will always be displayed on radar. The mode was very frantic, despite the six-player limit. Of course, you can go up to 16 players in a custom game, but the official version will be capped at six.

There is a lot of new content here, but everything at its core still has that iconic Halo feel. I’m happy with where 343 is taking things with the multiplayer. It’s new enough to satisfy fans of the past games, but not too new to scare them off completely either.