The secret’s out. Castlevania: Lords of Shadow – Mirror of Fate is a real game, coming to the 3DS later this year from Konami and developer MercurySteam. And yes, it’s a 2.5D affair with four playable characters: Simon Belmont, descendant Trevor Belmont, and two more to be announced at a later date. This game serves as a prequel to Lords of Shadow 2 — which will be revealed at E3 this week — and takes place some 25 years after the original game, Lords of Shadow.

Even though my thunder was stolen with this news, I can still tell you about how it plays and looks from my recent hands-on session.

Mirror looks great with its full 2.5D side-scrolling play. Even though I usually keep the 3D slider in the off position on the 3DS, I find that side-scrolling games are a good fit for the feature, and this one looks especially nice in 3D with its added sense of depth. Traditional enemies — bats, skeletons, harpies, mermen, and succubus — return, but they’ve been redesigned this time and look great. The stages themselves also shine with some of the cleanest visuals I’ve seen on the 3DS.

Beyond this, outside the castle, I worked my way into the ground, dealing with time-locked door puzzles and creatures that liked to stick an arm out of the dirt to grab your feet while you’re trying to hurry. 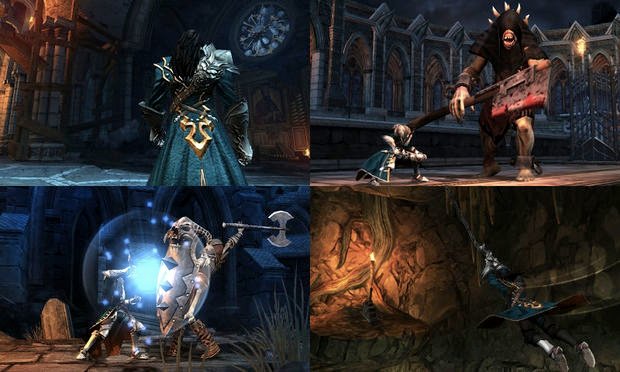 The combat is similar to Lords of Shadow in this outing, as you’d imagine. Trevor uses the Combat Cross, which hits with a slash with the standard attack button, but can also cover the area around him with another attack button. And, as we covered above, he gains a powerful boomerang later. We weren’t able to try out his light and shadow magic yet, though.

I didn’t get a chance to play as Simon, but he has his vampire killer whip, axes and burning oil. For magic, Simon will use elemental spirits during battle.

While it always looked great, it felt like the attacks were a bit slow to connect, almost as if they were intentionally held back to give a sense of power. It didn’t feel ‘off,’ but it also never felt like the attacks were truly connected with my button presses. Worse, the movement felt a little soupy. Walking and jumping had a sense of heaviness that never felt great ,though it never hindered gameplay, either.

Lords of Shadow was good, so I feel like Mirror of Fate could be just as good. It certainly looks good on the 3DS screen. If MercurySteam can give the responsiveness a little push, and they stay on track to give us plenty of exploration opportunities, we could be in for a nice little game.