If you can do it in a game, it will probably be doable in this insane action game coming from Cyber Connect 2 and Capcom. In Asura’s Wrath, you play as demigod Asura, a guy who is hated by all the other gods for a betrayal that’s still a mystery to him. As Asura, your daughter has been taken, all the gods are out to kill you, and you have no idea what the hell is going on. Of course, this has you pretty pissed off. And pissed- off fights as gods with nearly infinite powers make for pretty awesome gaming experiences.

We’ve run a preview of an Asura’s Wrath demo before, but I wanted to give my views on it after spending time with it here at E3. The demo battle against Wyzen is a great showcase for what we can expect with Asura’s Wrath. And don’t listen to those that have written this game off as a game of only quick-time events. I’m telling you this because I don’t want you to miss this game.

This battle has Wyzen, a god that starts out being nearly human-sized, eventually puffing up to be bigger than planet Earth after his rage increases over three segments of the crazily exaggerated brawl.

The end of the battle has Wyzen trying to smash Asura to death with a single finger, pointed down from space in a ridiculous display of infinite power. It comes to a point where you’ll have to brace for the incoming finger. You’ll dig in with your feet and hands by pushing the analog sticks down and out. You’ll then push up to push his finger back.

The epic conclusion has you mashing buttons to build up power to send your response punch up through Wyzen’s finger, up his arm and into his body in deep space, exploding him into a million burning pieces. It’s so epically epic that I worry about anyone that doesn’t at least grin at this conclusion. 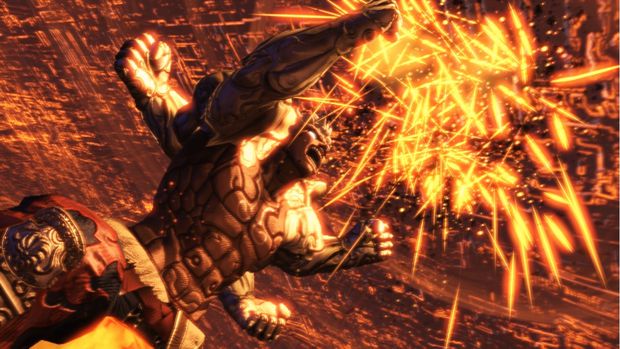 My beef is with some buzz I’ve heard about this game being ‘just quick-time events,’ and having little gameplay. Asura’s Wrath has a ton of gameplay, and a bunch of varied types at that. I experienced up-close fighting, distance shooting, and crazy meter-fill Burst Gauge rage attacks in this demo. The quick-time events, like ones where you could take missiles out of the sky and throw them back at Wyzen, are prompted, but they’re not necessarily QTEs. You can choose to ignore them and continue fighting as you were.

There are segments of the game that feature QTEs, but they’re usually transitions between boss transformations. Think of God of War‘s prompted events — this isn’t Dragon’s Lair. And the prompted events, like God of War, are so ridiculous in scope that you’ll have a hard time paying attention to what button you need to push.

Make no mistake: this is a cinematic action game. Some painted a picture of a game that was closer to an interactive cinematic — that’s just wrong. Cyber Connect 2 and Capcom have lined up an eye-popping button thrasher that takes over-the-top over the top with Asura’s Wrath.