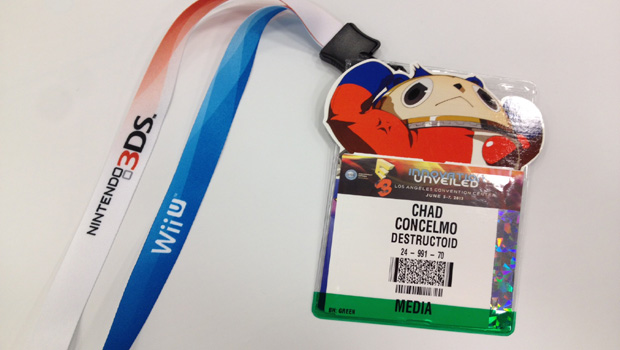 Our own Chad Concelmo is now in possession of his E3 2012 press pass, and he was nice enough to send along a pic for us to all take a gander at it. It’s always interesting to see what companies are willing to get their products promoted on the E3 lanyards and badge holders, and this year is no exception.

Last year’s passes came equipped with Legend of Zelda lanyards and Catherine badge holders. It looks like Atlus and Nintendo are at it again this year with Teddy from Persona on the badge holder, and the 3DS and Wii U logos on the lanyard. The Wii U logo looks a little better in white on blue. I hope that becomes the standard look. Anything to further send the message to the uninterested and uneducated consumer that the Wii U is an entirely different product than the Wii.

It’s less than two days before the Dtoid staff storms the show with our badges in hand. I personally can’t wait to go around scooping up all the discarded Teddy badges. I have about 20 of last year’s Catherine badges in a drawer. Every once and a while I give one to a total stranger just to keep ’em guessing.