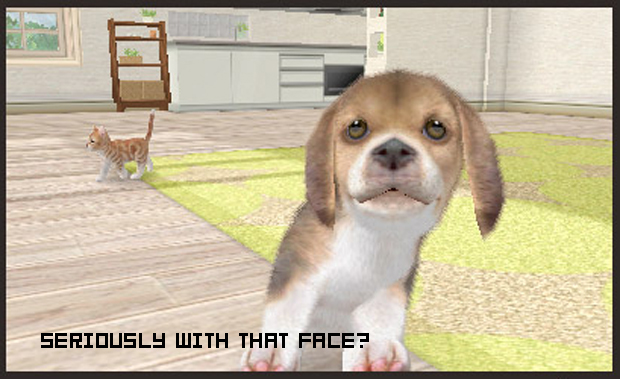 You know that cute head tilt that dogs do? You’ll be doing that at 3DS title Nintendogs + Cats. Nintendo’s Shigeru Miyamoto gave roundtable attendees a full rundown on what to expect from the pet sim as well as some details on the game’s inspirations.

Miyamoto got a cat. He had a dog, and that was likely the inspiration for Nintendogs, but the addition of a cat to his family was definitely related to the addition of cats to the sequel. Producer Hideki Kondo said that hearing stories of how Miyamoto’s dog and cat every day at work made him want to work cats into the next game.

Speaking to a roundtable discussion audience, Miyamoto joked that adding cats may have not been the best idea. He likened girls to cats, saying that you can talk to them, but they don’t always talk back.

To test the concept, Nintendo originally just threw in cat models in the original Nintendogs. Miyamoto and Kondo admit that the experience was a bit off. They said that you could tell the cat to sit, and it would, and then wag its tail. They did see that it was cute, and were inspired to work in some new game ideas. One the teased plays off how dogs and cats relate to each other.

The touchscreen-based control and interaction from Nintendogs returns, but now they have a bit more tech to play with using the 3DS, and Kondo says that they’ve worked to include all of it. The inner camera adds visual communication capability. After playing for awhile, your pet will recognize your face. Tilt your head and the dog will tilt its head in response. Draw your face closer to the screen and your dog will lick your face. The pets will recognize you and will remember your looks. What’s fun is that if you’re a new player, it might not recognize the face, and could possibly run and hide.

Nintendo wasn’t ready to speak much about the game yet, but they were willing to talk up their fur rendering technology. Kondo stressed that the increased horsepower of the 3DS let them create some impressive fur simulation. Now you can expect increased fur coloration and realism along with more varied dog sizes and types.

Nintendogs + Cats is still mostly under wraps, but at least you know there will be great fur and head tilting.