As busy as I am here at E3, I am not complaining one bit. In fact, as I play one amazing game after another I can only feel grateful that I am even able to do something this cool to begin with.

Never was this more apparent then during my playthrough of Treasure’s upcoming Wii sequel Sin & Punishment 2. I don’t know what it was, but there was something about playing this game that just put a huge smile on my face and made me realize that I love playing freakin’ videogames.

Find out what got me all emotional after the jump.

To start things off, Sin & Punishment 2 for the Wii is completely made by Treasure. While some sequels are going the way of new publishers, you can find comfort in knowing that Sin & Punishment 2 is sticking with the company that made the original so gosh darn amazing.

And, man, does this game feel like what Treasure does best! Every second of the massive level I was able to play is full of nonstop action and ridiculous situations. And the bosses? Oh God, the bosses are incredible! Even the minibosses are out of control! 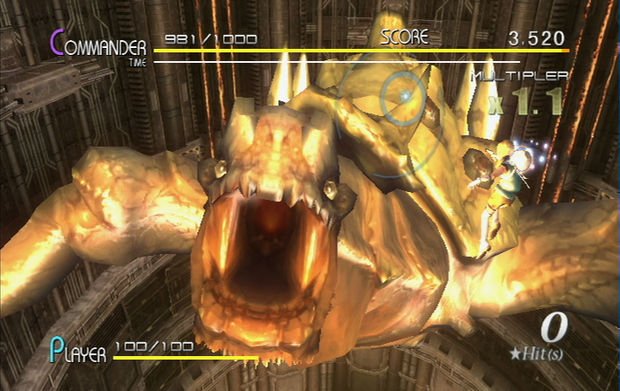 But I am getting ahead of myself. Let’s start with the basics.

Sin & Punishment 2 is controlled with the Wii remote and nunchuck combination. Like the original Nintendo 64 classic, the two characters you can choose from (a boy and a girl) automatically move through the level on-rails. By moving the analog stick, you can move your character around the screen, while the Wii remote handles all the out of control shooting action.

In the first Sin & Punishment, most of the game was spent running on the ground. In the sequel, however, both characters are constantly in the air, riding on hoverboards taken straight out of Back to the Future – Part 2. While flying around, the analog stick can move your character anywhere on the screen. In the sections where your character is running on the ground, however, the analog stick only moves you left and right. This can be remedied by double tapping the jump button (C) and pulling out the hoverboard to fly at any time. Obviously, though, this involves much more skill since the screen is constantly being filled with, what seems like, thousands of bullets at once (classic Treasure!). 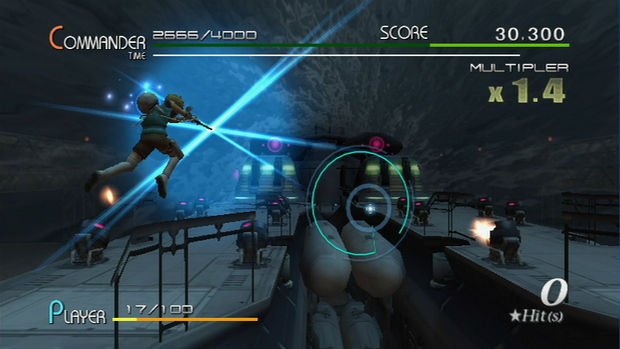 The attacking in the game can be handled in three ways: By tapping the B trigger, your character can perform an awesome melee attack (perfect for deflecting the aforementioned projectiles); by holding down the B trigger, your character sends out a stream of normal bullets (thank you for allowing the button to be held down, Treasure); and, finally, the A button can be pressed to charge up your special attack. This special attack is different between each of the two characters (the only thing, outside of visuals, that distinguishes the two). The boy’s attack is a huge area-filling bomb and the girl’s is a barrage of missiles that can be locked onto multiple targets. As the Nintendo associate said to me while I was playing: “His attack is perfect for bosses; hers is perfect for screen-filling enemies.” I couldn’t agree more, helpful Nintendo guy!

On-screen at all times is a target that can be aimed perfectly using the pointing capability of the Wii remote. And this is where the game shines. Gone are the super confusing and awkward controls of the original game. In Sin & Punishment 2, the controls are responsive and fluid, making aiming and shooting a million times easier than before. Seriously, running and flying around the game’s levels feels so perfect and makes the game so much fun to play. To me, it felt like a combination of Panzer Dragoon and pretty much every awesome action game Treasure has released: Gunstar Heroes, Mischief Makers, Dynamite Headdy. The list goes on and on! 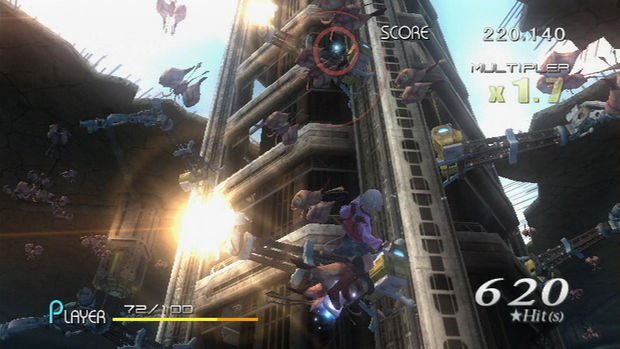 During the main level I got to play, my character flew through a massive, beautiful city (that’s another thing: the game looks gorgeous – it kind of reminded me of the look of Vagrant Story in a weird way), fought an onslaught of enemies, and battled a few huge bosses. Each sequence was endlessly entertaining and, luckily, challenging as all get out. Even though the game controls much easier now, it doesn’t make the game too easy (whew!). Health packs may be plentiful on the difficulty level I was playing on, but I needed them … a lot. Like I mentioned earlier, the game doesn’t let up with how much it throws at you. I don’t want to ruin too much, but just wait until you fight some of these bosses. Not only do they look amazing, but they do a really good job of using every trick in the book to take you down.

A perfect example: At one point, when I was fighting a massive killer bird-like creature, I was running on the ground. Every time I used my double-tap C button maneuver to pull out my hoverboard and fly over the rolling objects it was attacking me with, the boss would shoot out a huge fireball, knocking me down and depleting a huge chunk of my health. Just when you think of an easy way to avoid the chaos on-screen, the game surprises you with a brand new way of making you feel terribly inadequate! So awesome.

All in all, I was very impressed by Sin & Punishment 2 and can’t wait to play more. It looks and feels exactly like the original, but is improved in virtually every way. If the final product maintains the nonstop action and creative design of gthe E3 demo, Sin & Punishment 2 is guaranteed to be one of the best, and most unique games on the Wii.

Based on my hands-on time with the game, I am giving my impressions of Sin & Punishment 2 a 9.0.*