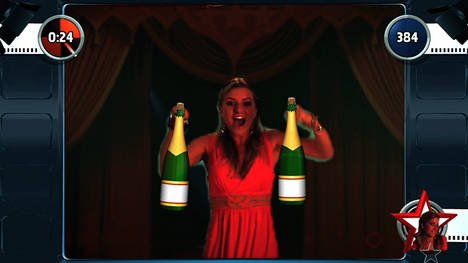 Finally, a use for the Live Vision camera other than showing your junk to random Uno players. To put it basically, You’re in the Movies is like the Eye Toy games. You’ll stand in front of your TV and Vision camera to play mini-games with your body. Hula hoop, dance, swat wasps and plenty of other mini-games will be available for you to perform along with three of your friends.

You’re in the Movies goes beyond just the typical mini-game extravaganza, though. Just like the title suggests, you’re going to be in a (cheesy) movie. You can pick a genre (action, comedy, black and white, etc) and pick a script, which will determine which mini-games you play through. The mini-games you perform will then be edited together to create a little movie.

If you didn’t catch the Microsoft Press Conference, Shane Kim along with a few other Microsoft peeps played a few mini-games. The game then edited a horror movie where a “giant” gecko was terrorizing the planet and only Shane and his Microsoft employees could stop the monstrous gecko.

Players will have the ability to edit the films adding voice-overs, music and whatever else that will be available in the editing room. Players will also be able to share their movies with the world by downloading them onto their computers.

Get ready for your close-up. “You’re in the Movies” combines cool with kitsch as you live out your dreams of becoming a scream queen, zombie or kung fu master. Premiering exclusively on Xbox 360 this holiday season, “You’re in the Movies” is the first and only game of its kind. It transports players into a magical world of cinema and hilarious improvisations. Using the Xbox LIVE Vision camera, players’ minigame actions are captured and placed into short, riotous films that put the spotlight on the unique and often dubious acting talents of friends and family. Performances never end up on the cutting room floor and are never the same. With “You’re in the Movies,” you’re about to be a star — if only straight to DVD.

·         Star in your very own B-movie. “You’re in the Movies” casts players in a variety of exciting roles, from an action hero to a silent film star. B-list actors often can’t be picky, but with the power of “You’re in the Movies,” feel free to choose a genre, choose a script and become an A-list movie star.

·         Casting call. Up to four friends can bask in the spotlight and play starring roles. But rest assured, even watching from the sidelines is fun! A top-notch director guides actors through their roles with simple instructions and immediate feedback; in fact, the director even rates actors on their physical performance in minigames. This exciting scoring system will stop you A-listers from getting too lazy.

·         Share your masterpiece with the world. What budding talent doesn’t yearn to be discovered? You can share your cinematic creations — your performances and user-created movies — by downloading your masterpieces to your computer and sharing them with friends, family and the entire world. Just think, that best actor award could be only a click away.

·         Take the director’s chair. Jump into Director Mode and produce your very own blockbuster. Lock yourself in the edit room and get to work filming the next big hit. Choose your music, add your own voice-over and re-edit to your heart’s content.

·         The miracle of technology. The Xbox LIVE Vision camera captures player movements using the revolutionary Cutout Studio technology. “You’re in the Movies” allows players’ best and most hilarious performances to be filmed, saved, shared and relived.

Developer Information:             Zoë Mode makes games that are accessible; simple, social, games that are effortlessly fun but don’t take themselves too seriously. Based in central Brighton, on the south coast of England, its diverse work force is unified by its attitude to gaming. Zoë Mode believes that games are powerful ways of bringing people together and having fun and that there’s more to life than gaming, but that gaming can make life better; and strongly believes that there is a game for everyone.