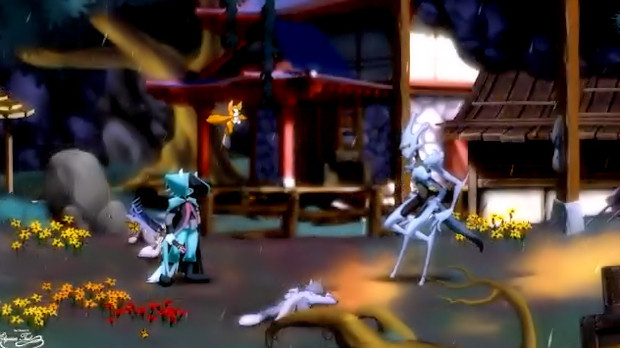 We first talked about Dust: An Elysian Tail a few months ago, where we called it “Odin Sphere for Furries.” However, please do not let this game’s furry leanings put you off, because Dust is so gorgeous, I’m having trouble believing it will appear on the Xbox 360’s Indie Games Channel instead of Xbox Live Arcade, especially with this new trailer.

It’s a sidescrolling brawler at heart, with a storyline based on an animated feature film currently being created by Dean Dodrill. Despite its status as an XNA-developed game, Dust has amazing hand-drawn graphics and fluid animation. The gameplay also looks like some solid, traditional beat ’em up action as well, which just so happens to be among my favorite types of gameplay.

We’ll continue to keep an eye on Dust, as it could truly become the breakout Indie Game on the 360 platform, and truly show others just what XNA is capable of. It’ll be a damn sight better than Kitchen Sink Wars, of that I can be certain.