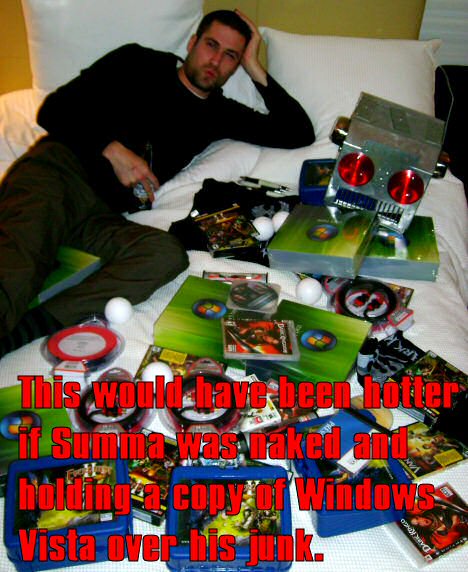 A couple of weeks ago I asked the brave men of Destructoid to send me their sexiest Nerdcore pictures and they responded. My e-mail inbox has been full of the hottest gamer bodies just dying to see the light of day, so now it’s time to let them loose on Destructoid and announce the winner of the Men of Nerdcore contest.

Hit the jump for the winner of our Men of Nerdcore contest, and the best of our Nerdcore entries.

The winner of the EB Games $50 gift card and Nerdcore Calendar is … Dexter345! Congratulations on being the sexiest Nerdcore guy!

[Editor’s note: Our friends at G4TV showed the pics to their female staff — priceless photos of their reactions are posted on The Feed. Dex is now internet famous! – Niero]

Thanks to all our other entries! You are proof that gamers have the biggest balls of them all, or at least big enough to need a Nintendo DS to cover them.

The Dexter345 and the Gamecube. Sexy, but is it art?

Knives like to rock out with his cock out to Guitar Hero, literally!

CannibalCalvin called him the Nintendoooboooy, but I think a guy is sexier with a little extra meat. Just more of you to love … and more of you to pitch in a wrestling match to decide who gets the controller next.

And last, but not least, The Zero God and his Nintendo DS reminds us that touching is good!

Thanks again to all who entered the Men of Nerdcore contest. You all rule the internets today!