Hacker? I hardly even know her!

Borne out of Double Fine’s yearly Amnesia Fortnight game jam, Hack ‘N’ Slash (as well as Spacebase DF-9) is getting a full release this summer. The top down action adventure game may look like a Legend of Zelda clone, but that’s intentional, because the actual mechanics are different. And weird.

You actually hack the game, rewriting bits of its code and changing values in real time to affect how you interact with these iconic mechanics. I feel a little dumb and intimidated, too, don’t worry. 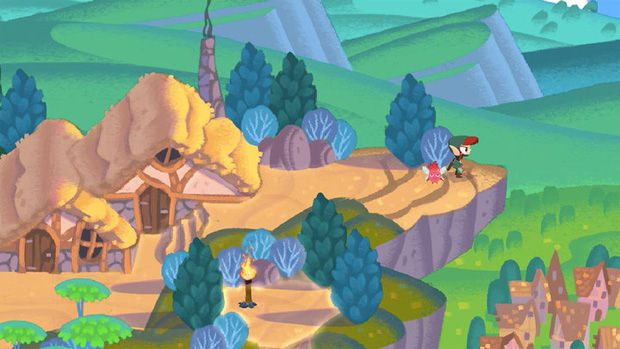 Your elf adventurer’s sword is a hack sword. Anything in the environment with a port can be hacked, just jam your sword in it. Project lead Brandon Dillon ran through a demo made for GDC to show off the increasing level of complexity. Because it gets complex.

Like Zelda, this game has rocks to be pushed. A rock with a port, however, you can jam your sword in and change certain values that cause it to function differently than is typical. If you set the movement space negative, for instance, you’ll find “pushing” the blocks actually turns into a pull, at least functionally speaking. In that sense, it’s as much a puzzle game as an action game, and there are sometimes multiple solutions or extraneous options to wade through.

There was a guard with a hack port on his back. If you can get around him and hack him, you can change a few different values. Take his movement speed down to zero, and he can’t much bother you. Set it negative and it’s like you have a functionally enforceable restraining order because he’ll be running away from you.

There’s also a Third Eye Hat that basically reveals a live debug view of the game and you can see things like hit boxes, enemy vision cones, treasure chest contents, and more. Sometimes you’ll find actual game files as books and can rewrite larger swaths of code. The bomb in Hack ‘N’ Slash, rather than breaking things, will make objects without ports hackable.

At one point a boss key surrounded by immovable rocks without ports. Using a bomb on them lets you go to an alternate world of sorts that builds a intuitive and functional architecture to explain how that object functions in the environment. There, you can change whatever you want — even turn all normal rocks into hackable rocks to clear the way.

That’s where things got way too complicated for me, but this is a Double Fine game, so you’ll have the trademark wit, writing, and a nice art style to help ease you in. And you’ll start off doing smaller tasks like changing variables as the game builds up your knowledge to the point where you can interact with more complex clips of code.