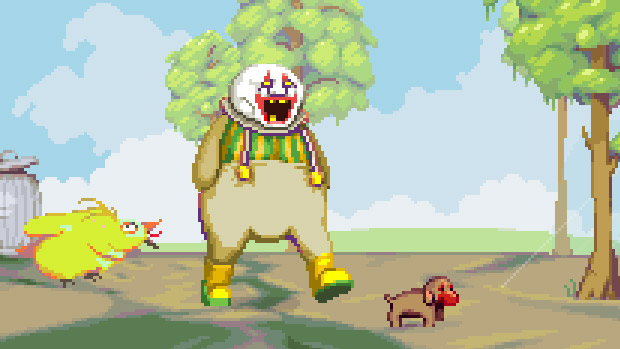 Can I overcome my fear?

Few things scare me more than clowns and as much as I find the protagonist of Dropsy to be unsettling, the game itself is also admittedly rather charming. This is a point-and-click adventure which emphasizes exploration, and visual storytelling over written dialog. The game has been going strong on Kickstarter — enough that funding is locked in, with four days remaining — and now publisher Devolver Digital has announced its involvement with the project.

While the team will help with aspects of production like marketing, quality assurance, and localization, to be clear, “Devolver Digital is not involved with money from backers nor do we have any say in how it is used. We’re going to provide additional funds beyond Kickstarter to make sure that all stretch goals are met and that any additional features or content the team envisions for the game are possible because we love Dropsy and want it made without compromise.”

Do take a look at the Kickstarter pitch — it’s well put together and there are GIFs. You like those, right? Dropsy seems to be right in Devolver’s wheelhouse, which pleases me so. It’s planned for release across Windows, Mac, and Linux in October 2014. Look at that dog!

Bonus: Here’s a secondary opinion from Jonathan Holmes because it was too good for me not to use in my post. “I hate that I am just learning about this game now. I wish that it had come out the day I was born so that I could spend a lifetime with it.”