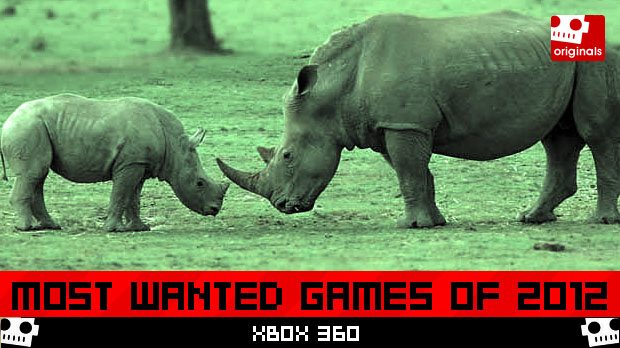 Welcome to 2012, everybody! This year is full of promising hot new titles, and all week long, the Destructoid staff will be sharing with you our most wanted games for 2012. Conrad Zimmerman and I are starting things off with our personal top picks for the Xbox 360.

We’re breaking everything down by platforms because there are just too many good games that need to be highlighted in the new year. At the same time, we’re not limiting our lists to just exclusives; these days, they’re fewer and farther between.

Check back everyday this week as we’ll be bringing you our top picks for the PlayStation 3, PC, Wii/Wii U, DS/3DS and PSP/PS Vita!

Max Payne’s life has been on a downward spiral every since the events of the original game. Max Payne 3 sees our hero trying to start anew as a body guard for a wealthy family far away from New York City. Like everything in Max’s life though, things eventually spin out of control and sees Max waging a one-man war once again.

I, like many Max Payne fans, was worried where Rockstar was taking the series initially but after getting a first-hand look I can say that this is the Max Payne you know and love. Rockstar is staying true to the fundamentals of the series, right down to the revamped bullet-time mechanics.

Suda 51 and the folks at Grasshoper Manufacture are some of my favorite people in this industry. They constantly put out weird, off the wall titles that always appeals to my inner lunatic. So you can understand why I’m so excited for Lollipop Chainsaw.

You play as Juliet Starling, a cheerleading zombie hunter who’s taking on zombie rock and roll lords and their zombie army that have infested San Romero High School. Your main weapon is a chainsaw and your boyfriend is a decapitated head that’s hanging around your waist throughout the game. And that’s only scratching the surface of what we can expect from Lollipop Chainsaw.

While I’ve always appreciated the Metal Gear Solid series, I’ve had a hard time delving into the stealth-action series. I love being bombarded by constant action and Metal Gear Rising: Revengeance looks like it will deliver just what I need.

A large part of why I’m even more excited for what Metal Gear Rising has transformed into is because of Platinum Games’s background. They know how to make a great action game, but their stories have always been on the weak side. With Hideo Kojima on board with his fantastic (and ridiculous) storytelling expertise, Revengeance is basically a match made in heaven.

BioShock represented a turning point for me, personally. It was the game that convinced me of the urgency with which I needed to invest in an Xbox 360 back in 2007, the final huge nail in the coffin of my wallet. Today, the BioShock titles remain some of the finest examples of a game which places as much emphasis on why people are shooting each other as the shooting itself.

It’s a good time to have a socially-conscious game of this nature. With civil unrest breaking out in the wake of the financial crises and growing wealth inequality that threatens to squeeze a middle class right out of existence, BioShock Infinite‘s tale of ultra-nationalists being fought by a fractured rebellion which seems to have forgotten the reasons it was fighting in the first place could not be more apt. Toss all of it into a floating symbol of American exceptionalism and you certainly have my attention. Make my playable character a disgraced member of the Pinkerton Detective Agency? Sold.

I genuinely love the Kinect system and have managed to maintain a high level of optimism for it, but the games designed typically suffer from a severe lack of complexity. Developers are still testing the boundaries, seeing what design implementations work with full-body motion controls and which do not. For my money, I have long maintained that the solution lies in combining the control options of Kinect with the traditional controller.

Steel Battalion: Heavy Armor attempts just that. With the interior control panel of your mech accessed by gestures and the actual piloting of the walker with a controller, it’s the among the first serious attempts at Kinect integration that we’ll have seen so far. With From Software at the helm, the title has a lot of potential which I hope will help to change the perception that Kinect games aren’t for the hardcore.

In 2009, I played no game more than I played Borderlands. Nightly sessions took place in my household for months following release, with surges of play surrounding the arrival of DLC. It’s the only first-person shooter that I have been able to get my fiancée to pick up and, even if it had been terrible, that fact alone would still warrant a day-one purchase of the sequel.

Thankfully, Borderlands 2 is shaping up to be superior to the original in every way. We’re getting new character classes with new skill trees, tons of new weapons and new environments fleshing out the world of Pandora. And last, but not least, it’s a story penned by former Destructoid Features Editor “Reverend” Anthony Burch. We’ll try not to hold that against it.

Additional staff picks for the Xbox 360: