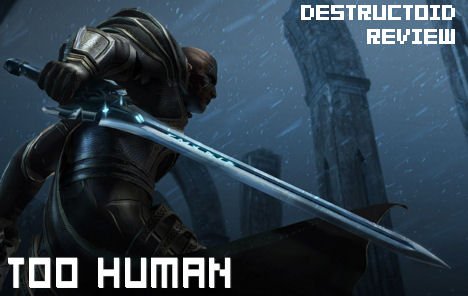 Ten years of talk, constant controversy. A messy lawsuit, multiple generations, several consoles and endless media coverage have all gone into Too Human, and with Silicon Knights’ child having finally survived a difficult birth to be released in North America and Europe, we finally got to see what all the fuss was about.

With so much hype and expectation, it would take no less than something spectacular to make Too Human worth the time and the effort. Has it all paid off? Is Too Human really the hallmark of innovation and storytelling that it was promised to be? Or rather, is Too Human an overdeveloped, underwhelming collection of bad ideas and even worse pretention? 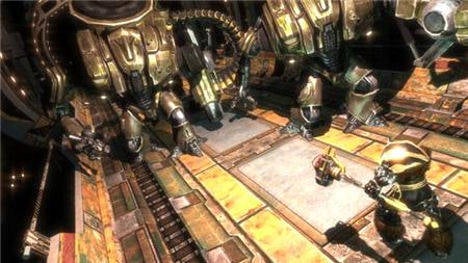 Too Human (Xbox 360)
Developed by Silicon Knights
Published by Microsoft
Released on August 19, 2008

Too Human attempts to blend Norse Mythology with science fiction to retell the beginning of The Ragnarok, that which the Vikings considered their end of the world, when their Gods, the Aesir, would be destroyed in a war with Loki and his children. Playing the role of Baldur, it is your job to wage war against the mechanical horde with whom Loki has sided and protect humanity as an Aesir.

While an interesting concept, the premise for Too Human quickly becomes absurd as the Norse mythology is shoehorned in, often awkwardly, and with no degree of subtlety. As much as I respect what the writers have tried to do, having what amounts to a glorified Space Marine refer to a woman as a “wench” before talking about his “weird” just comes off as ridiculous. This chapter of the series — part one of a proposed trilogy — is very shallow beyond its Norse roots and seems to exist solely to show how clever Silicon Knights is for referring to robots as goblins and pretending Odin is some kind of artificial intelligence.

The story has its redeeming qualities of course — Loki fulfills a stereotypical but enjoyable role as the sneering, gloating villain while the disembodied talking head of Mimir can be somewhat amusing. In this suspiciously short eight-hour game, however, very little exposition is actually had. It takes eight hours for the game merely to say “Loki is a bad guy. You will probably have to fight him in the sequels.” Ultimately, despite a few glimmering moments of promise, the game ended (abruptly) with me feeling flat, unfulfilled and frankly not very interested in what might happen in Too Human 2. 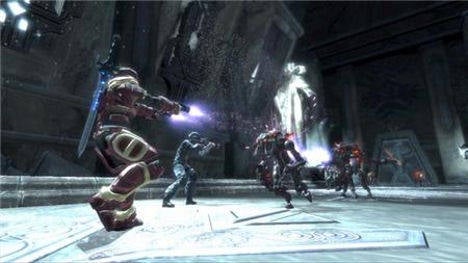 Sadly, the story is Too Human‘s best feature and things roughly go downhill from there. When it comes to gameplay, Too Human‘s is some of the worst action roleplaying I’ve ever had to encounter. Much like the storyline, everything works well in theory — you use the right analog stick to control Baldur’s attacks, pushing it in the direction you want him to attack, and using some button presses and stick twitching to create a few extra moves. Sadly however, when put into practice, the combat falls flat on its face. The analog controls lack depth of any kind, get really old really quick and are unresponsive, only working when they want to, the controller input struggling to cope with the various commands Too Human demands of it.

The combat is incredibly badly designed, and to further add to the frustration is the fact that it is incredibly unbalanced. Baldur has no ability to block, nor can he regenerate health without relying on item drops (unless you choose the right character class). His only means of defending attack is a pathetic dodge move that more often than not sees you rolling right into one of the thousand bullets that fly across the screen at any given moment. The game throws hundreds of ridiculously strong enemies at you, some of which are nearly impervious to bullets but will explode when defeated in close quarters, showering you with status effects that sap your health (and seem to last forever) and some giant foes with a tutorial for killing them that appears only AFTER you have defeated two of them. 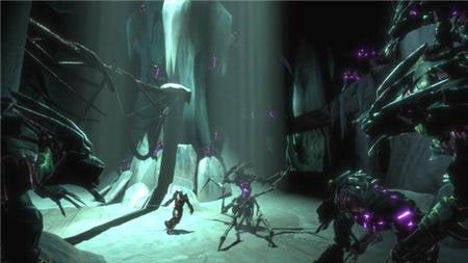 And why is the game so hard? It’s because it’s not actually hard at all. Silicon Knights, seemingly knowing that they have made a game that would be impossible to beat by conventional standards, has made Baldur invincible. If you die, you will respawn with very little in the way of punishment — except for one big problem.

Yes, ladies and gentlemen, I present to you the worst piece of game design I have had the displeasure of suffering through in the past five years. Every time you die, you are forced to watch a 25-second-long cutscene in which a Valkyrie descends and carries Baldur off. It is the same scene every time — the same animation, the same awful music, and the same length. All of it unskippable, and all of it happening often. It may not sound like much, but when you experience it for yourself, the frustration is almost unbearable. The game itself has been designed to kill you, and often, and one can only surmise that it’s because the developers have found this idea of the Valkyrie so important, so damn compelling, that we all have to pay attention to it over and over again. Well it’s not important, nor is it compelling, and it’s not clever in the least. If you are going to play Too Human, then it is advisable that you bring a book with you. You are going to need something to do during the regular, obnoxious periods of forced downtime. 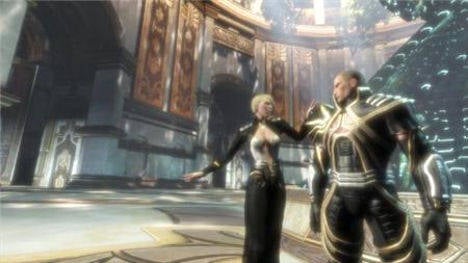 The worst part about the game is that it could have been excellent. Many times during the course of the experience, Too Human threatens to be a fun and engaging experience, only for those threats to remain empty. It can sometimes be a thrill to move your analog stick from goblin to goblin, hacking and slashing away before knocking some foes skyward and finishing them off mid-air. However, it’s not long before your enjoyment is broken utterly and completely by yet another unavoidable death, or Baldur choosing not to obey your limited commands.

The action is also broken up by numerous trips to Cyberspace — utterly pointless little exercises in which Baldur visits a virtual reality to push over trees and open doors. I don’t know if they are supposed to be puzzles (none of them are puzzling in the least) but I do know that they are incredibly boring.

There is at least plenty on offer for loot fans, as the amount of armor and weaponry you can pick up or create is staggering. In true RPG form, you can level up and assign skill points, but the RPG elements are very limited indeed and it never feels like skill points really matter. You will also be able to choose from one of five classes, including the vanilla Champion who is capable with both melee attacks and guns, the Bioengineer who can heal himself and allies, or the melee-specializing Bezerker. The classes are at least interesting, and sorting through ones loot to create the perfect set of armor is rather enjoyable, but these high points only serve to make you wish they were part of an altogether better game.

Graphically, things aren’t much better either. There is significant framerate dropping from the very first moment the game starts, and some of the animation is incredibly crude. There are also bugs and glitches, such as enemies that stop moving. On the sound front, there is some solid voice acting, but the actors are struggling to make credible an absolutely ludicrous script and the amount of times characters regurgitate lines during the game is atrocious. I really don’t need to hear one of my allies say such inspired phrases as “I didn’t even break a sweat” and “I almost broke a sweat” three-hundred times a mission. 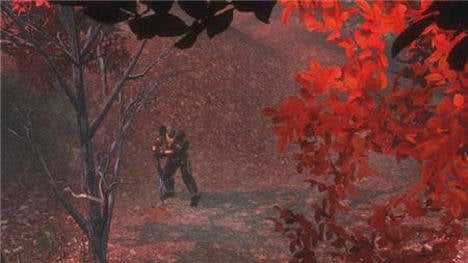 The in-game camera is also the worst one of recent memory, and I found myself having to wrestle with it countless times as it wildly swung around and attempted to fight my character’s movement with every step. There are various camera modes to choose from and all of them are bad. It’s 2008, not 1998, and there are ways of positioning the camera these days that don’t see your character flailing around like a maniac while you try and cope with the spastic visuals.

At least the artistic style is damn good. The way the Aesir and their robotic enemies look is fantastic, as is the architecture of the game. The world of Too Human is fully realized and were the writing or gameplay just as good, I’d have loved to engross myself what Silicon Knights has created.

I want to say that Too Human is flawed, but it’s not. A flaw would suggest that mistakes were made, but when you see the game in action, it becomes quite clear that everything has been done on purpose. Silicon Knights made no mistakes when it chose unresponsive analog controls, nor was it an accident that the game is designed with regular player death and repetitive unskippable cutscenes in mind. These arrogant decisions were all made on purpose and as such, Too Human is its creators’ perfect vision. It’s just a shame that the vision is absolutely terrible and should never have been turned into a videogame. Thank God it’s as short as it is, because I was more relieved than disappointed to find it was suddenly all over. 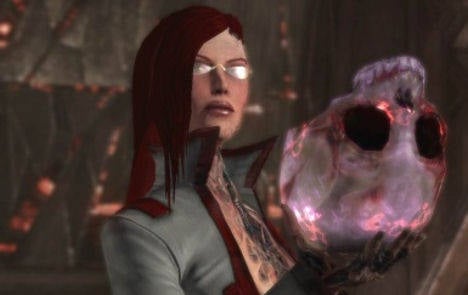 Score: 2.0 (Awful. Maybe the idea was kind of clever, or you may have fun accidentally, but everything else is horrendous.)