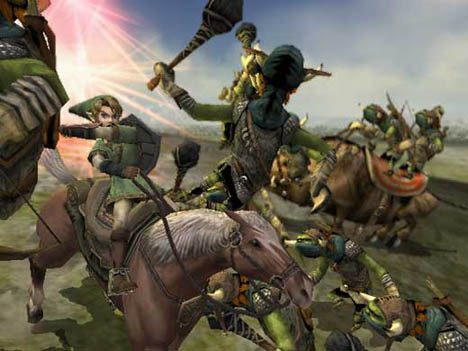 We’re starting a new review structure here at Destructoid and what better way to kick things off than with the mega Wii title The Legend of Zelda: Twilight Princess. What we’d like to do each week is take one game and give you different perspectives on our experience with the title.

Maybe you tend to gravitate toward the play style of one writer over another. By giving you multiple reviews, we hope to make your purchase decisions a little easier. We hope you enjoy what you read and get a little more insight into the game.

Hit the jump for our take on Twilight Princess.

Let’s get this out of the way: The Legend of Zelda: Twilight Princess is a port. A port of a great game? You bet. A beautifully executed, well-adapted port? Damn straight. But it’s still a port. That being said, I was going to drop fifty bones on Twilight Princess anyhow, and seeing as how I was planning on getting a Wii, the up-swap to the enhanced version seemed only natural. It’s a fantastic game, perhaps one of the best Zelda titles ever created, and the finest adventure title in quite some time.

The graphics aren’t anything special — this is a GameCube game, after all — but they aren’t terrible, either. One of the reasons that Ocarina of Time doesn’t rank high on my list of personal favorites was that, though it pushed the N64’s graphic capabilities to the edge, the game was just ugly enough that I had wished they kept it in two dimensions, if only for a little while longer. Visually, Twilight Princess is 3D Zelda done right, and this is in large part owed to the art direction. A little Shadow of the Colossus here, a little Ocarina there, and you have one of the most stylistically beautiful games yet created.

If you haven’t adopted a Wii yet and are still hanging onto that purple hunk of last-gen plastic, the question on your mind must be whether or not the additional features make Twilight Princess on the Wii worth the generation jump. My answer: it depends. The cursor-based aiming with Link’s assortment of ranged weaponry is a welcome addition, but the sword-swinging Wiimote seemed a bit tacked on at first; little more than a gimmicky replacement for any other button. But when combined with Link’s more acrobatic moves, shield attacks and so on, it becomes an addiction — I can’t see future Zelda games using any other control configuration. There’s room for improvement, but it’s a solid foundation.

Twilight Princess is a wonderful inaugural Wii title, but it’s not a Wii game. It does, however, give us a brief but satisfying glimpse into what Nintendo’s little system can do. Not quite Mario 64, but certainly not a bad start.

Firstly, if you’ve played Ocarina of Time, you’ve played Twilight Princess. Period. You can play as a wolf now, and there’s some neat new gadgets, but apart from that the formula has not expanded or changed in any way, shape or form.

If you’re a newcomer, this isn’t by any means a bad thing, but if you’ve ever picked up a Zelda before, then about two dungeons in you’ll realize that you just have more of the same ahead of you (solve puzzles, get stuck, find a new weapon that helps you solve another puzzle, boss fight, repeat).

Secondly, the Wii functionality is a joke. Swinging the Wiimote like a sword sounds fun until you realize that almost every hand motion except one (a stab) has the exact same result as if you’d just pressed the “B” button on a standard gamecube controller. While you may have a bit of fun the first few times you swing, eventually you’ll grow tired of making large motions and will settle for sitting down, flicking your wrist over and over to attack. Not to mention that your swings will never be as fast or as well-timed as a simple button press would, so you’ll often find yourself missing your opponent and having to readjust Link’s angle of attack in order to actually hit anything.

The only time the Wiimote functionality comes in at all useful is when you fire projectile weapons. I never thought I’d play a Wii game and think, “Man, this would be a lot better on the GameCube,” but Twilight Princess made me eat my words: the Wiimote functionality is not only inefficient, but gimmicky as well. Example: For no reason whatsoever, your Wiimote uses a fairy cursor that makes a constant, annoying “twinkle” noise every time you move it around. This twinkling noise goes through the entire game.

Please note that I’m saying all this as someone who picked this game up at launch. Someone who considers Ocarina of Time to be one of my favorite games ever. Someone who didn’t (and still doesn’t) even care that the graphics wouldn’t be that great, and still went into this game fully expecting it to be a hell of a lot of fun.

Plain and simple, I was wrong. Dead wrong. The controls are bad, your sidekick is annoying as hell, and the entire gameplay formula has not been changed in the slightest — and don’t dare think that it’s because the formula is perfect, because it isn’t. The plethora of dungeons will get repetitive, I don’t care who you are. I was hoping that Nintendo would at least try to innovate in some way with Twilight Princess, but they don’t even make an effort. All in all, if you’re a diehard Nintendo fan who wants to castrate me for badmouthing the Wii’s flagship launch title, then you’ll enjoy Twilight Princess. If you’re anybody else, you’ll just wonder what all the fuss is about.

You’re all thinking I’m gonna totally hate on this game, right? That I hate the Wii and Nintendo so much, I wouldn’t dare give a positive review of their last-minute flagship launch title? Well, as Kevin Spacey said in Superman: WRONG!

While I don’t think the game is the end all be all of games, for me personally, I cannot fault it for its incredible depth and full-on immersion factor. And, believe it or not, I actually dig the story. The problem for me, is that as Rev said, it’s very repetitive. While the environments change, the game remains the same. It’s sort of like taking a walk through the woods: You’ve seen one tree, you’ve seen them all.

For some, this isn’t an issue, but I’m not necessarily a huge fan of just doing puzzles over and over. I want to fight stuff. I want to blow stuff up. I want to kill every living thing and do it as much as possible. I’m shallow, I know it. I don’t have the patience anymore to travel from one end of a dungeon to another trying to find a way to open a door or move a boulder.

As far as controls, I’d have to disagree with Rev. Seeing as how I’m not the biggest Zelda fanatic, the fact that I could be more interactive with the game made me stay with it longer. It held a greater appeal for me because I felt like I was actually inside the game, playing as Link.

Should you buy it? Well, if you’re a Zelda loyalist, you probably already own it. But what I will tell you, is that if you have other systems in the house, I think there are better games out there. It’s a finely crafted game, and certainly shows that the makers put a lot of thought and care into it, it’s just not my cup of tea.

Filed under... #Destructoid#The Legend of Zelda