Last week saw the release of Spore, Will Wright’s genre-defying game of evolution and exploration. After years of hype, it seems to have delivered the goods and reviewers have been praising the game left and right for its creativity, design and ambition.

As they’ve already invested so much into creating Spore as an IP, even discussing the possibility of licensing the core game itself for other developers to make games based on it, it was only natural that we’d be seeing the title make its way out to some other platforms. Now, only a week after , EA released a DS version, Spore Creatures, into the wild.

Is this another example of Maxis pushing the boundaries of videogaming, or shovelware intended to capitalize on a hot property? Hit the jump for our review.

Spore Creatures, unable to come close to the scale of its parent game with the limitations of the DS, is instead an action/RPG. Players are cast into the role of a freshly spawned creature which has just emerged from the water to dry land. When the sole other survivor of the evolutionary process is captured by a highly-advanced creature with goals of galactic conquest, the player must embark on a quest to rescue it.

The story does what it needs to in setting an objective, but there is no depth whatsoever. The assorted species you encounter lack distinguishing characteristics beyond appearance and some combat abilities, even amongst the races you have to assist along the way. I was hoping that there would be some sort of lesson at the conclusion about growth and change and the effects that could have on a relationship, but that might have been asking for a bit too much. 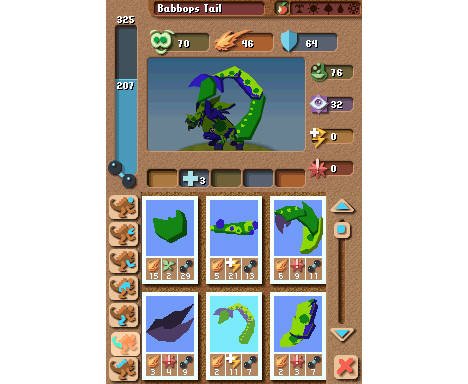 At the core of the game lies its creature creation system. By moving into a nest, you gain access your creature’s design. Creatures are built by combining parts found in the game world in a paper doll interface. You are limited by how much experience you’ve earned, represented by a “Body” stat. Every part requires a minimum amount of Body to use but that’s the only real restriction. If you want to use the same torso throughout the entire game, you theoretically could.

Creatures have basic stats for attack, defense and attractiveness. Secondary statistics exist for metabolism (which dictates how much health you regain from eating food), visual acuity, energy recharge and critical hit chance. The assorted parts you affix to your creature increase these, with different body parts being associated with specific stats. Legs add defense, arms provide attack and so on.

It sounds neat, but I quickly found it unsatisfying. While at first I played around with my appearance, affixing parts that had no value other than the cosmetic, the creature eventually becomes so cluttered with arms, mouths, legs, tails and eyes that it seemed pointless to have them. As time went on, I just started throwing bits in wherever they’d fit because I just didn’t care anymore. 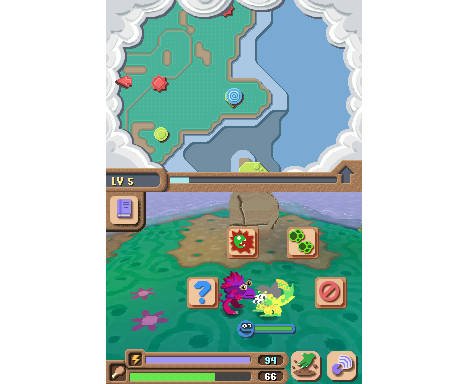 The actual gameplay features your creature, rendered in the same 2D appearance as in the creature builder, roaming around levels, collecting parts and achieving goals. The objectives have a decent amount of variety to them, as you’ll help certain species fend off attacks from others, assist them in gathering food or rescue lost children. The top screen provides a map with very useful icons for the locations of creatures and items while the bottom handles all the action.

Nearly everything is accomplished using the stylus. Holding the stylus anywhere on the touchscreen will make your creature move in that direction. Items in the environment that you can interact with will become highlighted when you are close enough and tapping them will bring up a menu of options. Some items can be picked up and carried on your back and then thrown by dragging the stylus towards where you want them to land.

In order to achieve many of the goals in the game, you’ll have to befriend other creatures. Upon approaching them, you can put out a social call and they’ll respond by asking you to either cuddle or dance with them. Cuddling requires that you drag a smiling face over their body a few times for a slight increase on their friendliness meter. Dancing launches you into a minigame where you tap flowers near the edge of the screen when flashing circles reach their centers. Performing well will give a significant boost to their meter while failure will result in a decrease and affects the meters of all creatures in range.

The dancing minigame isn’t bad. Over time, it becomes pretty challenging, and songs get faster with more targets the further you progress in the game. It is limited to only a few songs though and, while none of them are bad tunes, repetition wears the activity thin.

Once you have creatures on your side, they’ll frequently give you a new body part or a quest-related item and will be willing to accompany you into combat. If you manage to get all the members of a species to be your friend, you gain access to their nest, often earning another item as well as having a new place to swap out your limbs.

Not everyone is going to want to be your buddy (not at first; eventually every race is a candidate for friendship) and there are plenty of opportunities for combat. Attacking an enemy is done by dragging the stylus across them. It feels absolutely horrible, as many passes over the enemy don’t apear to register, so you just keep slashing in the hopes that you deal some damage once in a while. The special combat powers that some body parts offer seem fairly inefficient also, so the best recourse is just to keep hacking away and pray you win.

You can retreat by moving to the edges of the battle area and hitting an icon, but this too seems pointless, since there’s really no penalty for death. When you lose a battle, you re-emerge at the nearest friendly nest. No progress is lost, except for any damage you inflicted in the failed combat, and you can just run right back and try it again.

The story mode takes about 6 hours to complete and the last couple really seem to drag on despite having some of the more interesting quests. Once you’re finished, the game opens up a “Replay” mode that allows you to return to the individual levels and attempt goals you might have failed or find additional items in the world you missed.

Also extending the potential replay value are Badges, awarded for meeting a whole host of different conditions through play. There are many Badges to earn and completing them give you points to spend on cheats and special body parts unavailable in the main game.

At the end of the day, Spore Creatures would probably have been better served as Spore Jr. It’s very simplistic, despite the appearance of having a complex system of creature building. Apart from my issues with the combat, at no point is the game really bad, but it’s never a whole lot of fun either. It is charming for about an hour’s worth of play but not much else.

Score: 4 (Poor. An admirable effort with a sliver of promise, but essentially mediocre.)