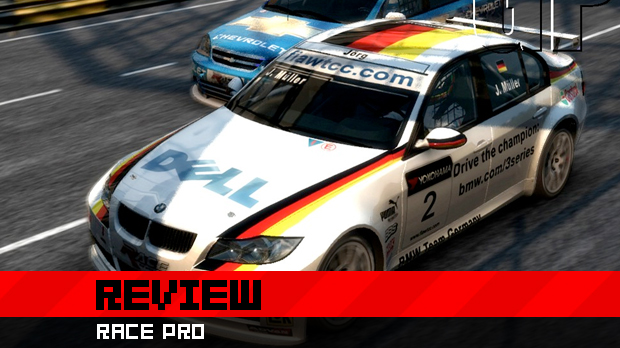 I feel like a kid whenever I get my hands on a racing title. I enjoy the wind in my hair, the thrill of high speed, and the blast of an engine. Racing games tend to give me back that indiscretion I enjoyed as a youth. I used to, quite literally, whip around corners or accelerate wildly at every community stopping point. Whenever I play a racing game, it comes rushing back to me; it gives me back that glow. Just ask the guy at the Wal-Mart intersection. He learned that I’m all business at red lights.

While any interesting racing game will give me the bug, I think SimBin’s RACE Pro bit me too hard. RACE Pro is a simulation for the Xbox 360. The focus, like any decent sim, is on realism. Every depression on the gas pedal or twitch of the steering wheel is important and measurable with its real-life counterpart. RACE Pro taught me how to drive fast effectively — as opposed to Project Gotham Racing, which showed me how to slide. For me, it’s more engaging when the experience seems real.

But, my horseassery doesn’t matter. You came here to read about the game. What are you waiting for? Hit the break for the review. 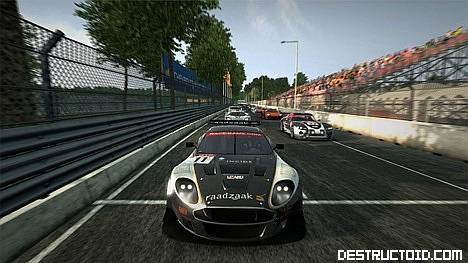 Red light. Perfectly polished cars quiver as their drivers hammer the throttle in anticipation. Red light. Bleachers, void of life, stand erect amongst a smattering of trees and Canon billboards. Red light. Attention is turned to the tarmac. Ahead is a hairpin turn, just beyond that a narrow stretch perfect for position advancement. Green light. A roar of engines ignites, a general repositioning of unremarkable cars happens and depending on your prowess, the race has already been decided.

SimBin’s RACE Pro is a simulation racing game, for sure. The emphasis isn’t on presentation or modes that entice you to explore the content. The stress is — to the game’s own detriment — within a deep set of driving mechanics and a physics engine that takes dedication to master. The no-frills approach has its advantages; I was intellectually engaged, compelled to study the tracks and understand the subtleties of real world racing. However, the lack of traditional racing game trappings — points given for great turns, busty babes handing out trophies, or even power-sliding — eventually exceeded whatever engagement I had initially.

The word “lifeless” can describe a few things in RACE Pro. Shoddy presentation is the immediate snag. A remarkable visual touch has been put on the cars, but it’s no more than a shiny paint job. Blurry, poorly textured trees and grass spot the landscape around the unremarkable grey tracks. Empty bleachers, camera huts, and the steady clunk of gear switching composes the game’s only sounds other than the cliché introductory music in the menus. 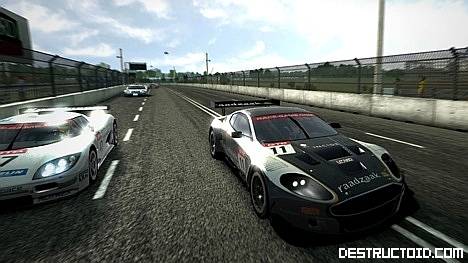 The game’s campaign mode parallels the lack of visual panache. The mode puts you in the shoes of a freelance driver across 33 different contracts (17 of which I’ve completed). Each contract — split across several different grades — has three races, each with its own conditions and different set of cars. After placing in a contract, you earn credits, which you then pump into yet another contract. The whole process feels alien. I never identified with my driver — he’s as faceless as the helmet he wears — a car, or even the game’s structure. It’s disbanded, disconnected in a way that doesn’t encourage you to explore the game’s driving mechanics.

There is depth to the driving, despite the lackluster modes and presentation. The game revolves around a top-notch, realistic physics engine that forces you to consider every straightaway and bend in the track. If you brake too early, you’re going to wind up in the grass. If you brake too late, you’re going to smash into a wall. If you overcompensate, you’re going to spin fruitless circles. Each of those mistakes has severe consequences, usually resulting in a last-place, credit-less position. The experience for me was frustrating in the early going, but eventually I learned the nuances of slipstreaming (effectively), tapping the throttle out of a turn, and downshifting on approach.

RACE Pro is direct with its gameplay. It’s you, the tarmac, and your ability to dominate the car’s mechanics while constantly renegotiating what you should do about competitors in front and behind. It can be dull, certainly, as most races are long affairs with major gaps between action. But, like most sims, the fun is derived from its realism. The game demands seriousness, and it was able to get me to respond. I wanted to lower my lap times by tenths of a second. I wanted to shoot the perfect gap or execute the perfect turn. Doing so was redeeming. Every track in RACE Pro has a series of minor satisfactions that builds into the ultimate victory, first place. 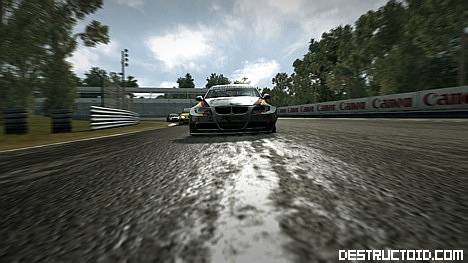 There’s a depth for the especially hardcore, hidden in the game’s UI. At the beginning of every race you can modify your vehicle’s parts. You can fuss with gear ratios, brake pressure, spring rates, suspension and multitudes of other numbers that can improve performance if catered specifically to your style of racing,

Yes, RACE Pro is serious; however, SimBin does a miraculous job holding the hand of rookies. There are three levels of skill (Novice, Intermediate and Professional) with modifiers that can aid even the basest of racing enthusiasts. In Novice, you can switch on anti-lock brakes, traction control, and stability control to navigate the hardboiled physics of the game with ease. You can also turn on a Race Line to help you learn where to position your car, when to brake or when to hit the gas.

You can unlock cars by progressing through the campaign, but you can only use them in the tacked-on cooperative modes or Xbox Live multiplayer. The Online component is great … when you can find a match. Like Campaign, a qualifying round prefaces every race in multiplayer. Whenever you find a room of 2-12 people, you’ll find that the majority of players don’t care to stick around. (And who can blame them? You chose multiplayer to race. Just randomize the positions, please.) When you are able to begin a race, you’ll have the same experience you did with the single-player, except now you’ll have to watch out for other people spinning out of control in the middle of the track. I found AI opponents to be more manageable than the riffraff on Xbox Live. There’s a certain chaotic element to human opponents that ended up driving me nuts — RACE Pro isn’t about spinning opponents into the dirt, driving backwards on the track or clogging up lanes with messy racing.

In the end, RACE Pro doesn’t transcend the hardcore audience that it’s intending to ingratiate, despite the amount of assists that the lower levels of play allow. If you’re looking for the kind of game that doesn’t let you or other players swing around a corner at 240 km/h, this is a very safe bet.