Yes, NPPL Championship Paintball 2009 came out in November, which, by my count, was about three and a half months ago. Ideally, I would’ve played it over Thanksgiving break, but the game didn’t hit my mailbox until almost December, by which time I was already off the radar, thanks to a rather long vacation to visit my Dad. So, I didn’t get to actually play NPPL 2009 until January and, as life has a nasty habit of getting in the way of me playing videogames all day, I’m only just now feeling comfortable enough to review it.

Second disclaimer: I’ve only played paintball about three times, which makes me the most qualified person, amongst a veritable battery of Destructoid editors, to review NPPL 2009. I don’t claim to be particularly knowledgeable about the sport or its culture; however, I do know what a fun videogame looks like.

NPPL Championship Paintball 2009 isn’t perfect by any means. But it can, on occasion, be lots of fun.

Most ostensibly open-minded people (like my literate and worldly roommates) have a knee-jerk reaction when it comes to paintball videogames: “Paintball is like a recreation of a war game, and a paintball game is a recreation of a recreation. So it’s, like, war twice removed. Fuck that.” I guess they have a point, but I think it’s a point that works to NPPL 2009‘s advantage: it’s an absolutely stripped down game focused on first-person shooting mechanics that isn’t encumbered by sloppy writing and melodrama. In a genre filled with tacked on narrative structures, I find it refreshing just to kill (or, “eliminate”) people.

The game’s controls are all intuitive and easy to use, the only deviations from the standard FPS fare being the ability to slide or dive and the ability to “walk” the trigger by alternating the RB and RT. The LT also allows players to “lean” to the side of a bunker. Learning to lean effectively will go a long way in keeping you alive, provided you’re a cautious and tactical player like myself.

During my first couple of hours with the game, I thought that I had found the game’s trick: my gameplan was to stay hidden and pick off opposing players until they’re all gone, à la Gears of War. I am, clearly, a “backman.” I was in the process of congratulating myself as some sort of paintball Sun Tzu when my roommate, Nathan, grabbed the controller and started charging and diving and spraying paintballs like some sort of crazed idiot. Interestingly, both methods seem equally effective. He is, clearly, a “frontman.” 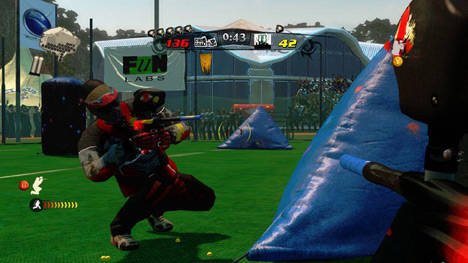 On the one hand, it’s very easy to have a lot of fun in NPPL 2009 whether you enjoy carefully choosing your cover and sniping, or aggressively bumrushing the balls off of your opponents. On the other, none of that variety is built-in to the game mechanics. For example, my career mode player, Michael Lugay (yes, I picked him because it’s kind of like “Leray”) is a frontman, which is to say that he should be the one capturing flags and scoring points while his back- and middlemen cover him. Unfortunately, as I explained, nothing prevented me from assuming the backman position. It’s too easy to max out your characters stats and, all to often, your AI takes care of a lot of the dirty work for you. You can issue commands to them, but I found them to be ineffective and the game, for the most part, is easy enough to beat no matter what you do or what position you do it in. Even the different stats, diverse equipment choices, and various maps and modes don’t do much to differentiate the experience. Fourteen-man online multiplayer livens things up for sure, but the different positions still feel relatively flat, whether you’re playing speedball or woodsball.

However, that isn’t to say that it isn’t incredibly fun. Since you’re not mowing down hordes of aliens, and since the enemy artificial intelligence is remarkably good, scoring points and eliminating enemy players always feels significant. Rounds of paintball are short and intense and you may only get one or two “eliminations” before it’s all over. Because it happens so rarely and so quickly, each successful sexual encounter elimination is fun and empowering and does a lot to keep players engaged. Unfortunately, the frequent loading screens tend to deflate the excitement that the game skillfully builds up.

Unfortunately, being a sports game is a double-edged sword. When the mechanics work and you actively vary your play style, NPPL 2009 is fun and engaging. Too often, however, it just seems monotonous. Your team’s AI is almost too good — if you let them, they’ll play the entire game for you. Of course, no one is going to advocate shitty AI in games, but in this case, it doesn’t necessarily make for the funnest experience. 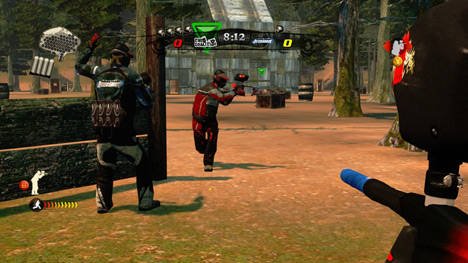 Without any cool set-pieces to spruce it up, the career mode can get stale. If you lose a tournament, for example, there’s nothing stopping you from trying again and again, and most of the tournaments play pretty much the same way. It seems ironic that a game that is so good at making individual rounds interesting could miss the mark when it comes to the overall game. Don’t get me wrong — NPPL 2009 has some solid FPS mechanics going for it; but it needs some extra padding (like FIFA 09 or NHL 09‘s “Be a Pro” mode) to really keep players coming back for more. Career mode is just a series of tournaments and there’s no sense of significance or urgency about them, whether you win or lose.

I really can’t stress how much fun NPPL Championship Paintball 2009 can be, provided you take it upon yourself to make it fun. Unfortunately, there’s not much to keep the player engaged for the long run — a fact exacerbated by the awkward animation, minor technical snafus, and the mid-nineties, Gen-X rut the soundtrack fell into. NPPL 2009 has some very sold shooting mechanics at its core and, with a bit of practice, Sand Grain Studios could have an excellent sports franchise on its hands; until then, however, their potential remains unfulfilled.