While your mom and your little brother dig Wii Sports‘ Baseball, I would like to have a little more baseball in my baseball videogame titles. You know, like players with legs and arms. And fielding.

Mario knows golf and tennis, but baseball? Nintendo pitches us the baseball game we all knew was coming with Mario Super Sluggers for the Wii, the successor to the GameCube title Mario Superstar Baseball. Does Sluggers give us more of the arcade-style baseball action that Superstar did? Or does it strike out with the bases loaded?

Mario Super Sluggers looks nothing like Wii Sports. After witnessing the colorful eye-popping cinematic, complete with an insanely catchy theme song [there’s even lyrics!], you’re dropped into a Mario/Nintendo world where baseball is king. You’re on an island made of several baseball stadiums, populated by all of the Nintendo regulars. Even Wario has his own Wario-themed baseball diamond. Everyone is living a happy baseball-loving life until Bowser and his boys literally crash the party by storming the island with their own evil stadium.

Mario Super Sluggers may not look like Wii Sports’ Baseball, but there are some similarities under the hood. It’s possible to play with only the Wii Remote, swinging it like you would a baseball bat, or swinging it overhead to pitch, like you would if you were to throw a baseball. This method of play is simple and fun, but we’ll leave this control method for your mom and little brother. There are two other control schemes: one uses the Wii Remote held sideways like an NES controller, and the other uses both the Wii Remote and the Nunchuk. The former scheme has you batting and pitching with the “2” button and running with the “1” button. The latter uses the control stick to let you run to the base of your choice while still maintaining waggle control.

I tried each control method and found that the Wii Remote-only setup was best for a quick, casual game. I liked the Remote/Nunchuck for more in-depth gameplay. It has to be said that Sluggers suffers from accidental waggle problems. You’ll find that slight arm or hand movements may cause your player to swing or pitch on their own, which could be pretty frustrating when bases are loaded and you weren’t ready. Of course, the sideways Wii Remote control method would eliminate this, and control methods can be changed at any time, but then you’re missing out on the fun of swinging. 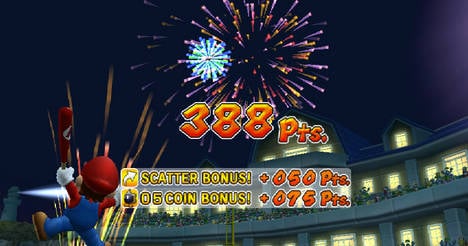 Fun? Yes, the swinging mechanic is pretty fun. A simple well-timed whack of the Wii Remote lets you swing your bat normally, just as in Wii Sports. The Charge Swing is executed by pulling the Remote back and holiding it to wind up your power. A charge gauge is shown. If you swing at its peak with the right timing, you can knock the ball out of the park. On top of these methods, the Star Swing is specific to each character. “Good moves” charge up your star meter, which you can spend on the flashy Star Swings. Running to bases couldn’t be easier. You only need to shake the Wii Remote to run, and your D-pad or control stick will let you select the appropriate base.

Pitching is fine, aside from the occasional false pitch. The control is much too touchy, forcing you to throw accidental pitches, sometimes at the worst times. Much like batting, pitches can be charged or “starred” for special effect, but different moves require a twist of your wrist, which can be somewhat painful after an inning or two.

Fielding is the most shallow aspect of the game. If you’re playing Wii Remote-only, fielders will automatically go toward the ball, which is quite boring. Switching to other control modes gives you some control, but it ends up being even more frusturating when the computer gives control to a weak or slow player. 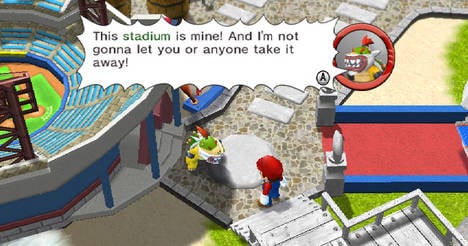 Batting, fielding and pitching all become slightly more interesting with “chemistry,” a mechanic that powers up your characters based on their relation. Basically, if the characters are friendly outside of baseball (Mario and Luigi), they’ll be able to do special things on the field. If not (Mario and Bowser), you’ll actually find yourself at a disadvantage when playing on the same team. Some benefits include Mario Kart-style power-ups; one of the best uses of these power-ups lets batters toss items like bombs out into the field to disrupt fielders.

Aside from playing this normal exhibition mode, Sluggers also features a “Challenge” mode, which puts you into a RPG-ish story. You’ll walk through the island, taking challenges and recruiting characters to build a dream team to eventually take down Bowser and his crew. Don’t expect anything deep, but it does do a good job of gradually teaching you the game’s controls. Aside from this, there are also a few minigames and the return of the “Toy Field,” both letting you have simple baseball-ish fun alone or with friends.

Mario Super Sluggers fits perfectly in line with other Mario Sports titles. You’re not getting a sports sim here; this is about simple Wiimote-swinging fun. Those looking for a high level of challenge need to look elsewhere. There are some glitchy pitching control issues and some slightly disappointing fielding choices, but Mario Super Sluggers is still the best way to play baseball on the Wii.

Score: 7.0 (Good. Replayable, fun, but nothing innovative or amazing. The game potentially has large flaws that, while they don’t make the game bad, prevent it from being as good as it could be.)