I got a short bit of time with 3DS RPG Devil Summoner: Soul Hackers last week, giving us the first taste of Atlus’ port of this decade-and-a-half old Japanese Sega Saturn title, coming to North America for the first time later this month. My time with it was really short — just enough to peek inside the box and see what’s going on. Even then, I’m ready to hack into this battle system.

It’s already clear that if you love battle strategy as much as I do, you’re going to really dig this game.

You’ll be hacking demons more than anything else, of course. You’ll do what you always do in a Shin Megami Tensei game — talk to demons — but the cyberpunk setting has you doing so in a more hack-y way, for the lack of a better word. I mean, it doesn’t get more cyberpunk than a gun (called GUMP) that unfolds to also add computing and demon summoning/communicaton functions.

From what I saw, this 3DS port strikes an interesting balance between old and new. It’s funny to think that the 3DS has more graphical horsepower than the Sega Saturn did, but it shows in the port. It’s a case of new on top of old, but in the best way. From the cutscenes and art to the menus and actual gameplay, Soul Hackers gives off this really cool vibe of jumping into something old, but also something polished up and new.

The presentation isn’t quite up to what we saw with the most recent Atlus 3DS title, Etrian Odyssey IV, but that’s not to say that it doesn’t look nice. Map navigation will remind fellow SMT fans of the first couple of Persona games in that you’re moving a little pawn around a satellite-style view of Amami City as well as the greater world. Actual dungeon exploration looks sharp and clean, but with slightly less frills than EOIV. Again, the look fits with the vibe, so it’s fine. 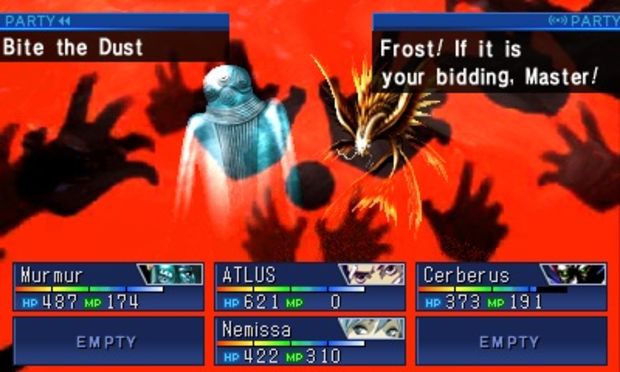 It’s no surprise that Soul Hackers is a first-person dungeon crawler with a demon summoning mechanic. This kind of dungeon exploration while fighting random battles and collecting demons along the way is likely something you’ve done before as an SMT fan, but there are a few changes to the system that make this game more challenging and interesting.

Demon negotiation is worth the trouble as you get to add them to your party to help you fight and explore, but it’s a bit more work than usual in Soul Hackers. The basics are the same — meet, greet (or beat), to add to your collection — giving players a kind of demonic Pokemon vibe. Atlus says there are over 300 demons in Soul Hackers to collect, with over 30 being new additions over the original title.

As with past series games, demon alignment is a key factor. You’ll encounter Chaotic, Lawful, and Netural demons, and you’ll have to be mindful of their alignment to get the best out of them. For example, chaotic demons might not listen to you, or lawful demons might not want to break the rules when you need them to. 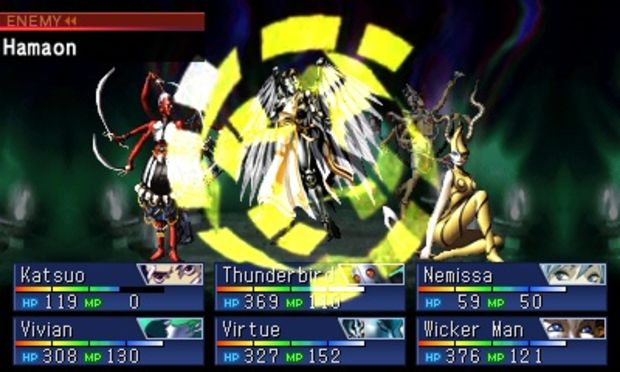 Demons also have their own characteristics that affect everything from negotiations to battle. A sly demon might argue with you as you try to talk it into coming into your party, while a dumb demon might do useless things in battle.

If that wasn’t enough to keep you busy, you’ll also have to watch the lunar cycle, as it affects demon behavior. Atlus explained that some have special powers that unlock with certain timings of the lunar cycle. For example, one high-level demon is pretty weak during most moon phases, but with the full moon it becomes a killer.

Finally, demon use will cost you. Demons summoned cost one of the game’s two currencies. Yen is used for standard purchases, but Magnetite is demon-only currency. You will pay to summon demons into your party, with each having their own cost, based on level. You’ll also pay an upkeep cost, with each step costing you more of your money. But before you get too worried about finances, know that Magnetite is earned through regular play, and it seems that you’ll have more than enough to work with. You can also trade Yen for Magnetite if you run out. 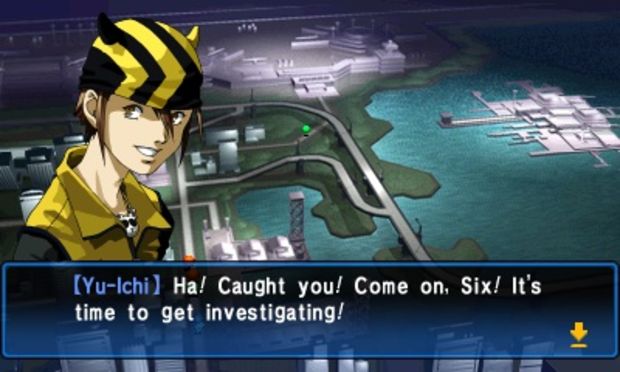 All of these factors affect battles. For example, new strategies are required to best manage Magnetite. You could fight with low-cost, low-level demons and save some cash, and then pay for the big boys in key battles as a strategy. Atlus pointed out that party composition matters more than ever in Soul Hackers. I was told that there are times that you’ll want to stack your team like you would in an MMO, with a tank, healer, DPS and more. But on top of all of this, you’ll also have to be mindful of alignments, lunar cycles, personalities and more. Phew!

I only had a chance to play through a few battles, but they were all satisfying enough that I’m already looking forward to release. I fought some low level beasts, which should have been easy, but I already had to contend with some of the above listed technicalities.

One demon of a different alignment didn’t want to fight when I told him to (it said “I don’t wanna!”) via a direct command. Soul Hackers lets you send out these direct commands during fights, but depending on characteristics, alignment, lunar cycles and more, those commands may not work out for you. There’s also the option to let the demons decide for themselves how to proceed, but these factors still matter. As an example, a “dumb” demon might waste a turn by healing a party member that didn’t need it.

Soul Hackers also has some StreetPass functionality to play with. 3DS Game Coins can be used towards an in-game currency which can be used to acquire new demons. Your helper in these affairs, the cute little guy named Nemechi, can also be evolved using coins, which each of his levels bringing about new demon summoning opportunities. Atlus also briefly mentioned another StreetPass function that will let you interact and perhaps trade with other Soul Hackers owners. Both of these are welcome features! 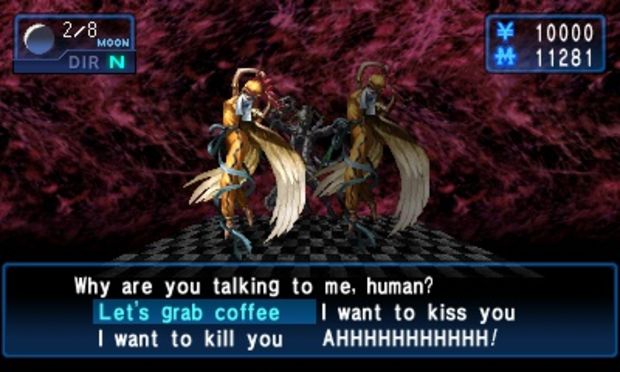 We hope to get started on a full review soon, but here’s what you need to know now. First off, Soul Hackers is a fine looking port, given the care that Shin Megami Tensei fans would expect from Atlus. They have made good use of the 3DS’s graphical capabilities as well as its dual screens and touch functionality — quite an upgrade. And if you haven’t tried to plug through an translation of the Japanese original, you also need to know that this game is going to be a delight for SMT fans. Soul Hackers is spilling over with depth. And demons.

We don’t have that much of a wait until the April 16 release date. Check back for our review in a week or so.