Impressions: It’s worth upgrading to the PS5 remaster for $10 if you’re a returning PS4 player

Death Stranding Director’s Cut is a remaster for PlayStation 5 with 4K60 support, new quality-of-life features — like a Firing Range with a bunch of weapon-specific time-trial drills, a Buddy Bot follower who can carry Sam, and a Cargo Catapult to launch heavy shipments over dicey terrain — plus a few new quick but lore-impacting story Orders.

It’s out September 24, and I’ve played it. A lot of it! This iscovn’t going to be a beat-by-beat breakdown of every single addition, upgrade, or tweak, as I’m sure a wiki will have that covered soon. Instead, I’ve just got some non-spoilery impressions to share about what to expect from Death Stranding Director’s Cut as a veteran player and a first-timer. 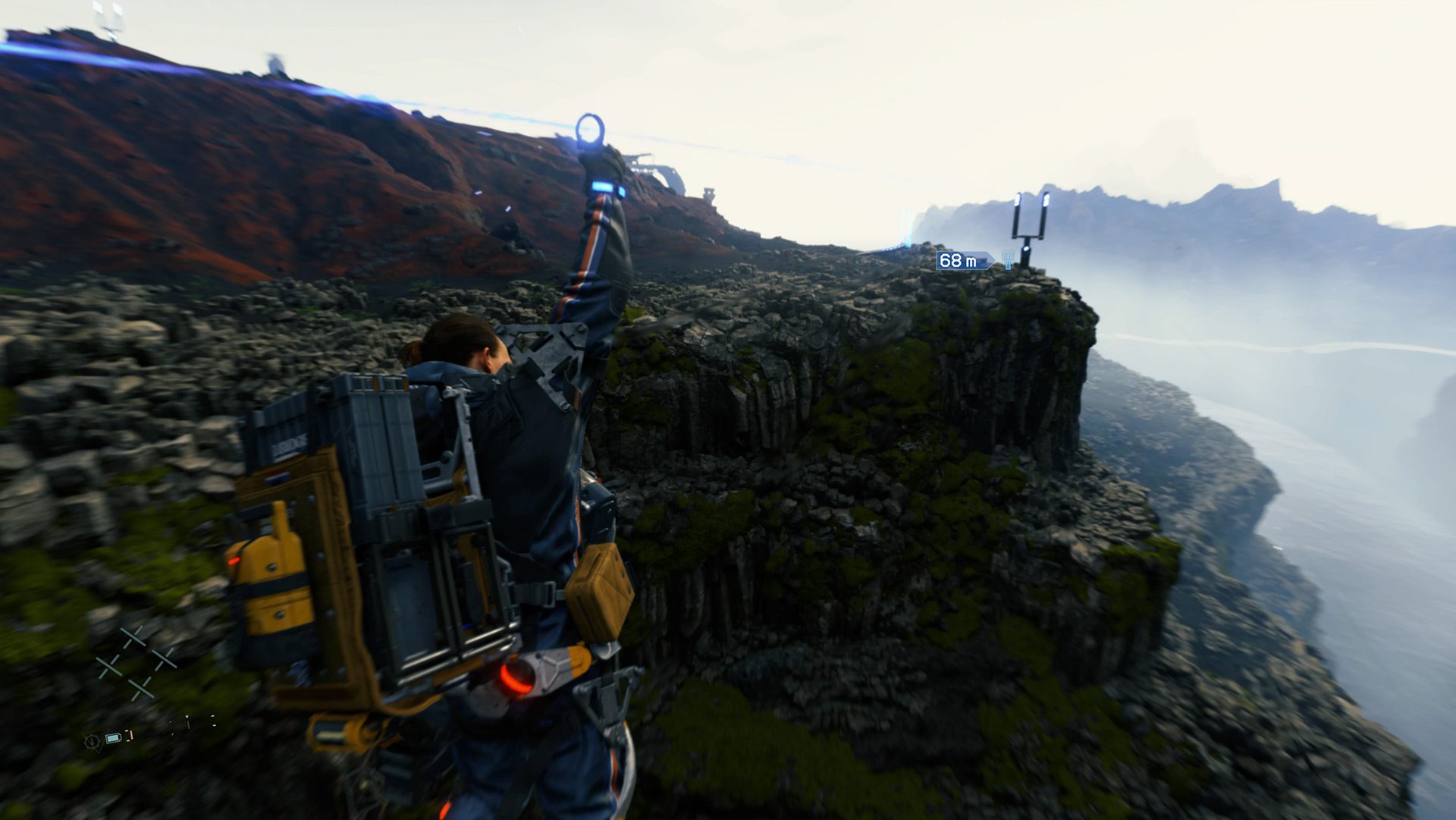 If you’re coming in fresh, it’s $50. If you’re a returning Porter, the Director’s Cut is a $10 upgrade from the PS4 edition. (Sorry, PC players, but this is a PS5 exclusive for now.)

Some quick housekeeping: You can bring your save data over from the PS4 version, which is great, because this is not a short game — though you’ll need to do so from within the PS4 edition via an in-game pause -> System -> Export Save Data option. Yes, it’s a bit annoying to need to (probably) download and install the game again rather than just have it just effortlessly migrate from the cloud. Set aside some time (and storage) accordingly.

Having completed Death Stranding on PS4 in 2019, that’s what I did, and a whole bunch of PS5 trophies popped back-to-back. That said, I ended up starting a fresh file to see how the new Director’s Cut content and features would be doled out. As it turns out, it’s a very gradual rollout to the point where, if it’s been a while, you might not realize some of this stuff is even new. For instance, the Support Skeleton — that wasn’t here this whole time? 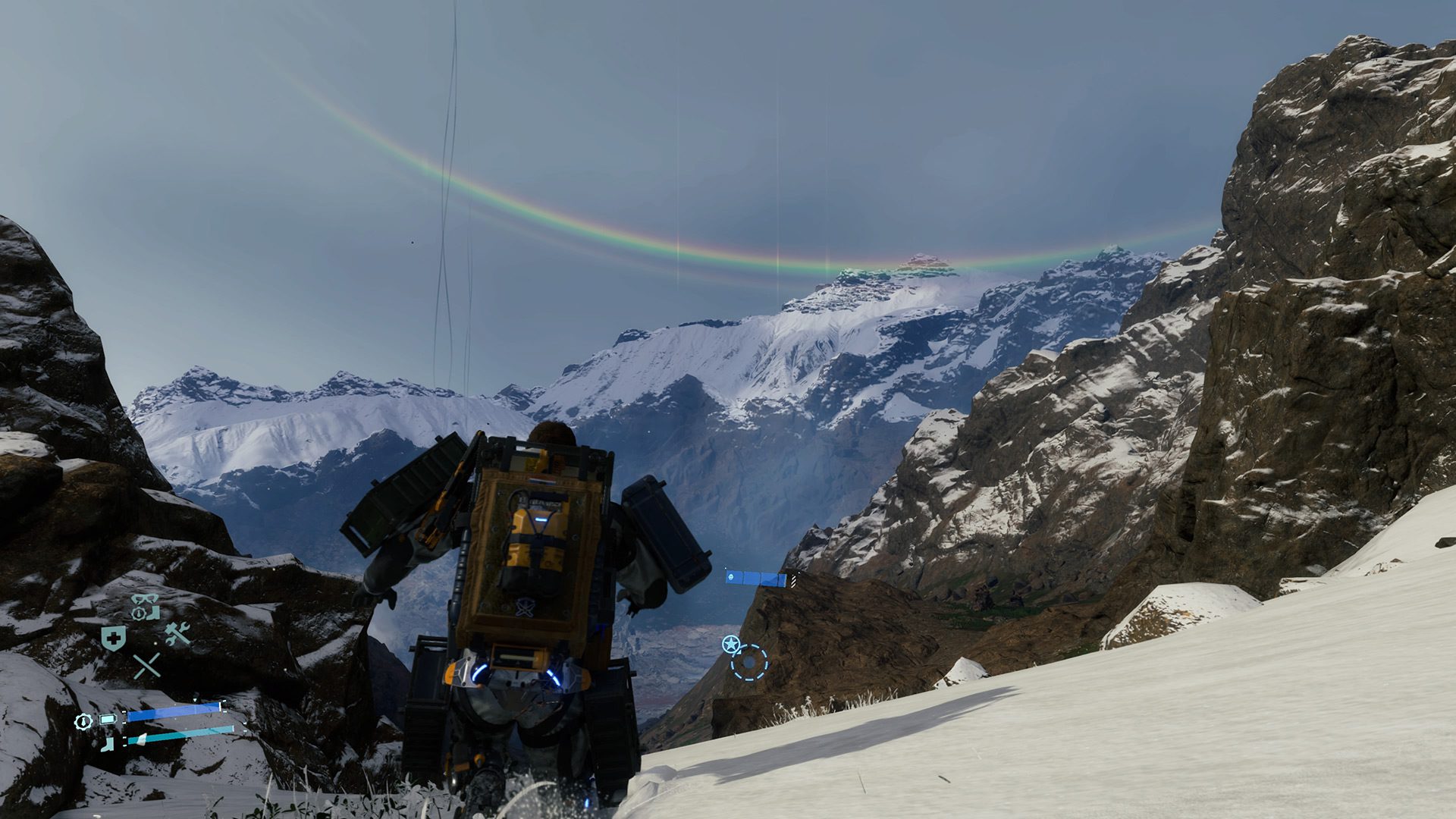 Before I go any further, I should share some of my general thoughts about Death Stranding. Chris reviewed the PS4 version at launch, so where do I stand on this game?

I loved getting wrapped up in the tantalizing mysteries of Death Stranding before it launched in 2019, back when we had no context for the naked man with the child on the otherworldly beach. Those eye-catching trailers, ethereal and anachronistic themes, and masterful song selections were something else. The pre-release buildup from Kojima Productions felt like an experience in and of itself, even now, in retrospect. They elevated it. Hideo Kojima can get my imagination whirling like no other game director.

I also loved going on the wild (but sometimes too meandering) ride that this cinematic-heavy open-world delivery adventure game ended up being. The story wasn’t what I expected — hell, neither was the “conscious hiking” gameplay — but overall, I got a lot out of it. Some emotional moments fell flat for me, while others really resonated.

This game had (and still has) some one-of-a-kind moments. It was bizarre to play Death Stranding — a game about reconnecting disparate and guarded people across the US — in the time before Covid. It’s bizarre, in a different way, to play it again mid-pandemic.

Before getting the opportunity to play Death Stranding Director’s Cut for this site, I honestly wasn’t sure I’d ever want to replay the game. In some ways, it’s the equivalent of a hard-hitting movie you only need to watch once in your life. But I went for it, and I’m ultimately glad I did. After a few slow-burning introductory chapters, Death Stranding kicks off, and before I knew it I was (once again) building an elaborate network of zip-lines to ferry my Sam, and maybe yours, around the treacherous area surrounding Mountain Knot City. 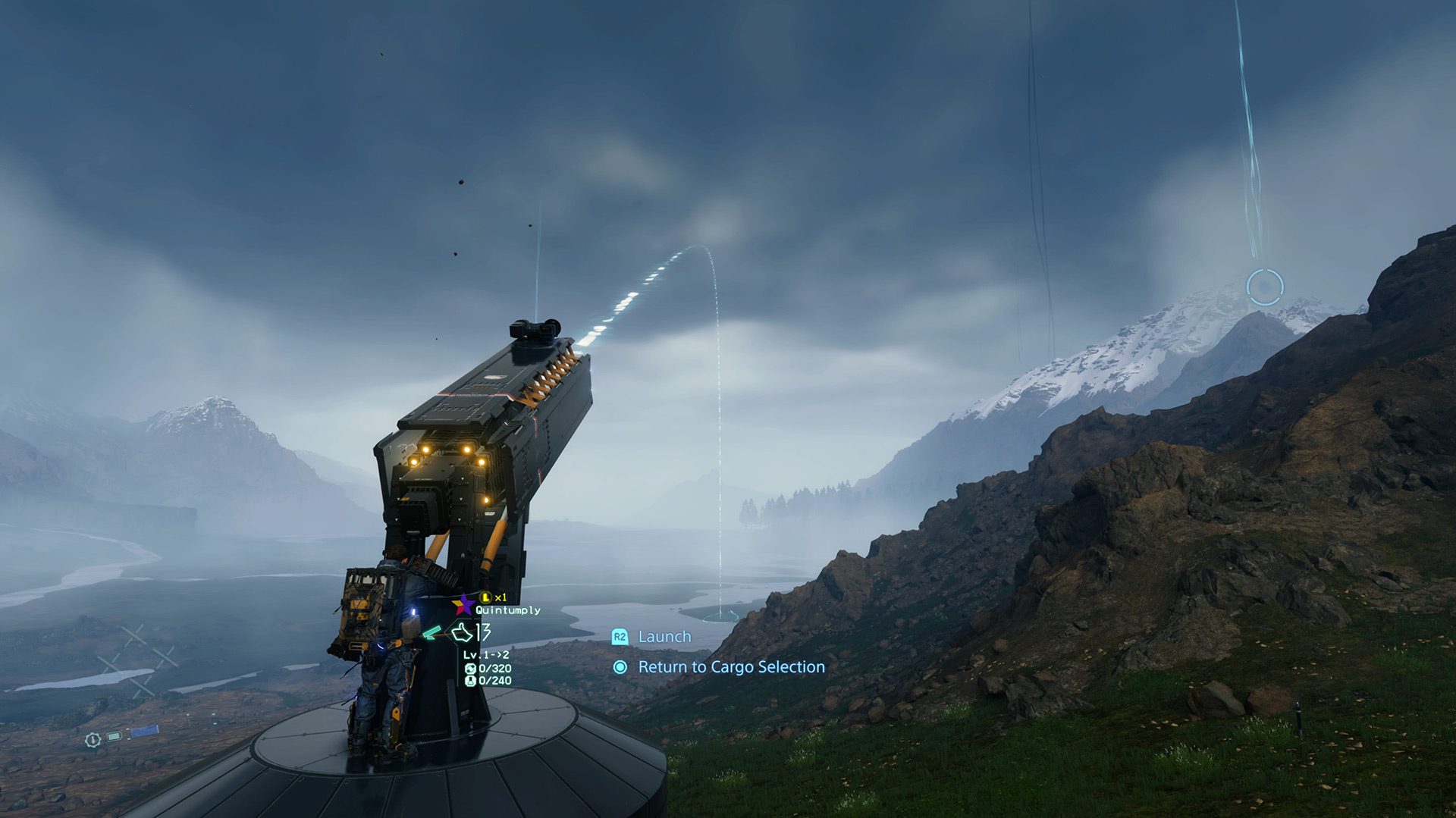 At this point, you’re probably wondering when I’m going to get to the actual Director’s Cut impressions. Well, I kind of already have! This isn’t a huge story expansion or anything.

PS5 features like few-second-long load times are a huge upgrade, as some of that waiting around really added up in the original PS4 version, while haptic feedback on the DualSense controller is more of a nicety than a mind-blowing inclusion. It builds upon Death Stranding‘s existing gamepad-trigger-clenching perilous-mailman immersion, for sure.

I will say, if you’ve got headphones, use ’em — the 3D audio is fantastic whether you’re trudging through a snowstorm, wading through a chilly river, or vibing out to Low Roar.

When it comes to the new content and playthings, don’t be afraid of the Director’s Cut somehow mucking up the purity of the original Death Stranding experience. I was a little worried about that coming in, but after completing a full story playthrough, I don’t see it that way at all. Some of the sloggier missions can be sanded down now — if you want. 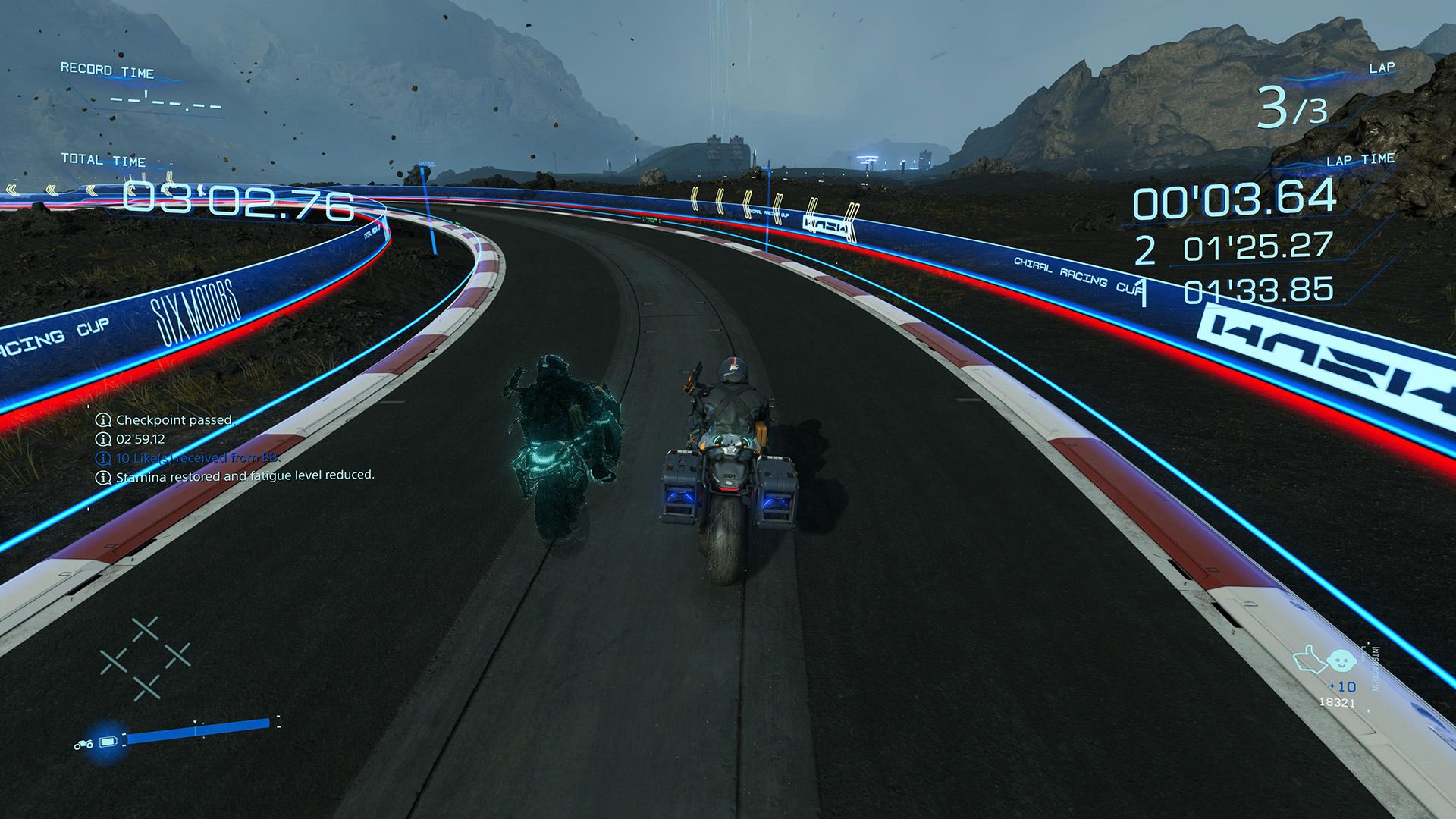 Yes, certain additions like the Maser Gun are going to make things easier — initially. The gun lets you one-hit KO the Mules with a well-aimed — and I do mean well-aimed — zap to the head at close range, and it can temporarily ground vehicles. When it comes to decked-out late-game foes, or even just the ghostly BTs, you won’t be using it.

The Support Skeleton is an all-rounder for hauling heavy cargo; I used it as much as possible until I was better off with the All-Terrain Skeleton. The Buddy Bot is like a souped-up version of the Floating Carrier with more freedom of movement.

And really, that’s the bulk of what to expect: more options for Death Stranding‘s various hostile-terrain-traversal situations. I didn’t find a great need for the skinny Chiral Bridges, the pretty short-range Cargo Catapult (which seems best for building projects), or the wacky trick-enabling Jump Ramps, though I’m sure some players will find clever uses.

While I like those additions from a “if another asynchronous player builds it I’ll definitely use it” perspective, I’m not a fan of the race track, which you can build south of the Timefall Farm. Does it look neat? Absolutely. Is it fun to drive any of these vehicles, including a roadster designed with the track in mind, in multi-lap races? Not particularly. And I say that as someone who likes mountain biking in this game.

On the other hand, the Firing Range is great for what it is — a risk-free opportunity to get good with every weapon (as you unlock them naturally in the game) and put your skills to the test against targets and simulated enemies for leaderboard glory. You can access this room from any delivery terminal once it becomes accessible very early into the game. 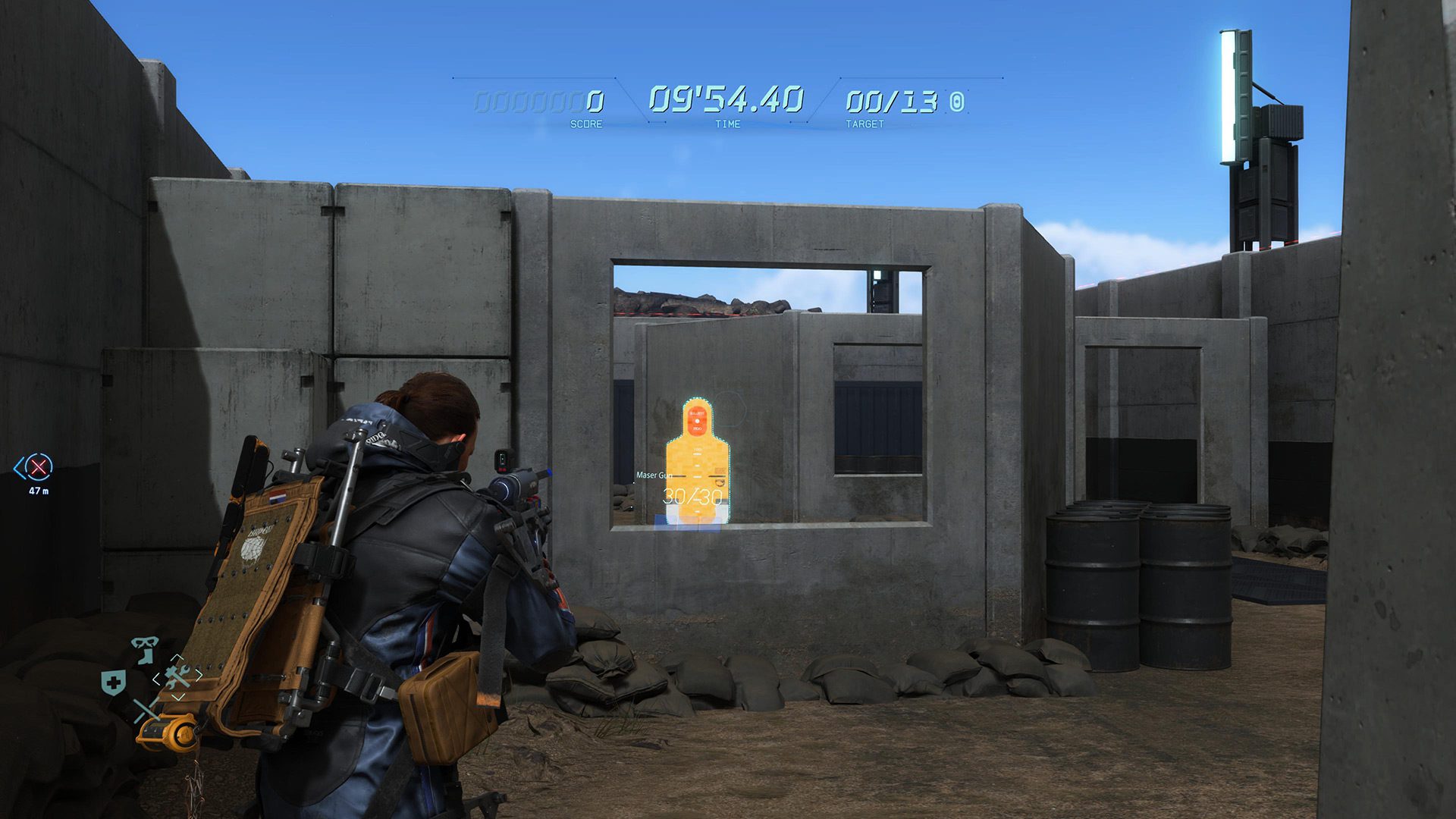 Worth stressing: you aren’t just going to start a new game and have immediate access to this new stuff. It’ll show up when it’s supposed to show up. It’s all woven in.

Speaking of which, you can start the new Ruined Factory storyline, which is three cool but normal-length Orders, pretty early on in the first region of Death Stranding.

I’m not going to go into specifics any more than I should — the trailer with a Metal Gear Solid joke showed plenty as is — so I’ll just say that this stuff is one of the most human-combat-heavy bits of Death Stranding. Ultimately, you’ll make three trips to a factory with interesting story implications and some big connections to existing characters. The first two trips can happen right away, and the final one won’t be possible until after you’ve completed the main story. The Ruined Factory includes new cinematics, too.

Is it enough to single-handedly warrant the $10 upgrade for returning players? Maybe, maybe not. But I think overall, with the PS5 refinements and some of the new tools, it is. 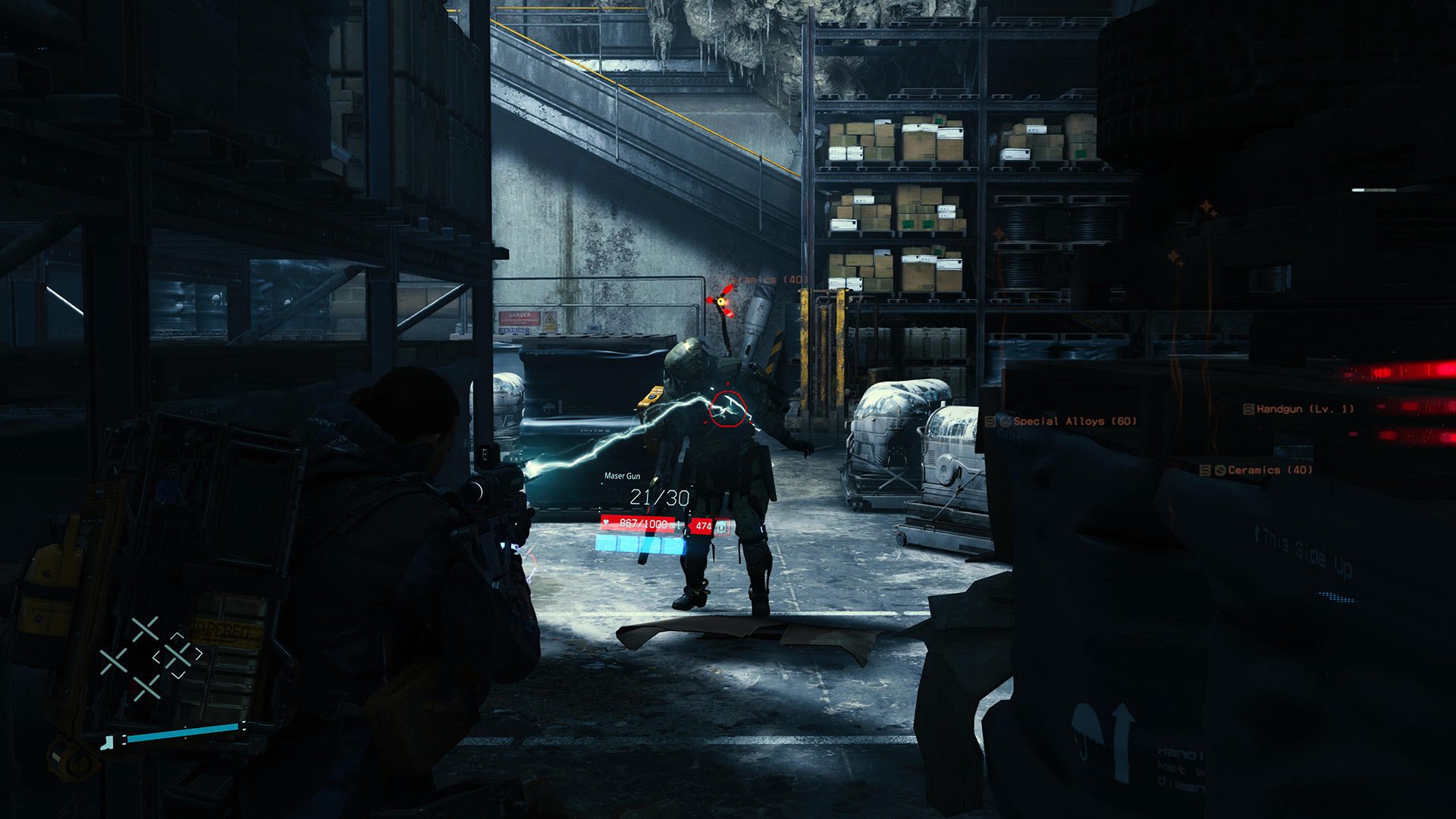 My advice? If you’ve got a partial PS4 save file ready to go, or even an endgame file that’s not at 100 percent completion, Death Stranding Director’s Cut is a wonderful way to tie up loose ends. Some of the additions are interesting distractions at best, while others are genuinely helpful tools that provide alternate plans of attack as a futuristic delivery man. The short but memorable line of new side-quests is essentially icing on top.

Brand-new players, by all means. Tear into this poignant, artisanal, off-the-rails hiking video game, even if it’s slow at first. And don’t forget to smash that “like” button.