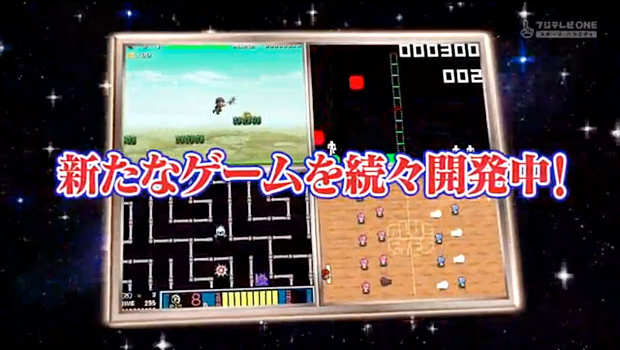 I’m still extremely sore that Retro Game Challenge 2 was never localized. The original game, based off the brilliant Japanese “Let’s Play before Let’s Plays were a thing” TV program Game Center CX, was a retronaut’s dream — a collection of old-school, NES-styled parodies played from the perspective of a typical 80s gamer child. XSEED made the effort to localize this gem, but too few people bought it to make localizing the sequel a worthy endeavor. There is a fan translation in the works, but progress on that has been as slow as molasses.

Studio G.rev, responsible for the recent 3DS shmup Kokuga, is hard at work on Game Center CX 3 for the 3DS. GCCX host Shinya Arino recently checked on progress during a recent episode of the show (check that sweet footage here and here). The first minigame he played was a witch-themed Mario Bros. clone, while the second seemed reminiscent of Namco’s Sky Kid. A few other games were then briefly shown, including a Pong-esque foosball number.

I won’t lie that I cried a bit inside. It should be mine! But there doesn’t have to be an unhappy ending this time. Quite a few 3DS games have made the jump overseas as digital-only releases thanks to lower overhead costs, so perhaps there’s hope CX3 could do the same. Kokuga was a boxed title in Japan and came here via eShop, after all!