I’m more of a leg man

For some reason, Crimson Dragon feels like the weirdest Xbox One launch title. Maybe that can be attributed to the spiritual Panzer Dragoon sequel’s tumultuous development (from 360 Kinect exclusive to budget, $20 Xbox One game).

I didn’t get try out any of those carry-over Kinect functionality that’s been talked about, like the ability to barrel role by leaning my body — news that would make the early Mario Kart-playing me “woah” in amazement. Thankfully, the controller worked just fine.

Well, except for the really lazy, floaty reticule. I don’t know if ii’s supposed to be that dragons are unwieldy means of transport or what.

Crimson Dragon features 6 different dragon types that can evolve into a total of 18 different configurations of dragon. Add in a skill system and you might find it worthwhile to train all sorts of dragons — slow lumbering beasties, agile and lightweight ones — to handle different missions.

I started with an on-rails portion of the game. Different segments in the level are ranked uniquely; for example, one portion of the level will task you with destroying all enemies, another with collecting artifacts. I assume these indvidual ranks will offer some reflection of your overall stage rank. 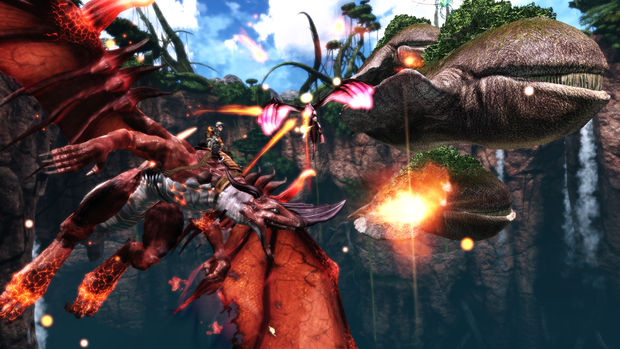 You have a main and alternate weapon type of three varying elements that act in a rock, paper, scissors power struggle of superiority and inferiority. The main with the dragon I played featured a lock on after painting up to eight targets with the reticule, which I could then unload upon. Meanwhile, my secondary was stronger and slower, featuring limited auto aim.

It took me a while to get used to navigating the plane of movement while flying along rails, but eventually I was barrel rolling my way to high scores without too much of a hassle. I actually S ranked a boss with little effort, so hopefully my supplied dragon was just over leveled to facilitate demos.

The one snag I did have, though, was controlling the reticule. It feels lazy, as if it occasionally hems and haws before springing into action, and floaty, carrying with it some momentum one way before if listens to your command to send it another way. If the game is indeed harder than I experienced, that lack of precision could be an issue. 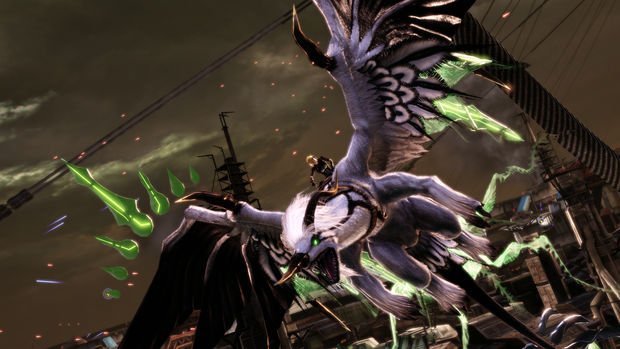 In trying the aforementioned boss fight, I also got to try out the new free-flight mode, which takes you off rails, as the name implies. It generally works, from the one scrap I was in, though navigating a three dimensional plane is always a bit wonky.

Tagging along on ym glorious conquest was my wingman. You can go through your Xbox Live friends and hire their dragons out as AI wingmen to assist you in the game. Picking a wingman with the third attack type you’re unable to cover will probably be a good idea. They’re hired out with in-game cash; the better they are, the more money they cost.

All of the missions can also be played in three player co-op.

Unfortunately, Crimson Dragon, as demoed, just isn’t all that great. I guess we’ll see in a couple of weeks if the full package is any more worthwhile.